There are some interesting winter cocktails at Wilfred’s Lounge in Napa. I tried and liked the Hot Buttered Rum, a lighter spin on the cocktail and without a ton of thick batter like you sometimes see (I acknowledge that could be a plus, or a minus, depending on your preference). I liked the warm rum cocktail on a rainy day (a coaster-related accident prevented me from taking a nice looking photo). We also heard great things about the Flora’s Holiday with mulled wine. 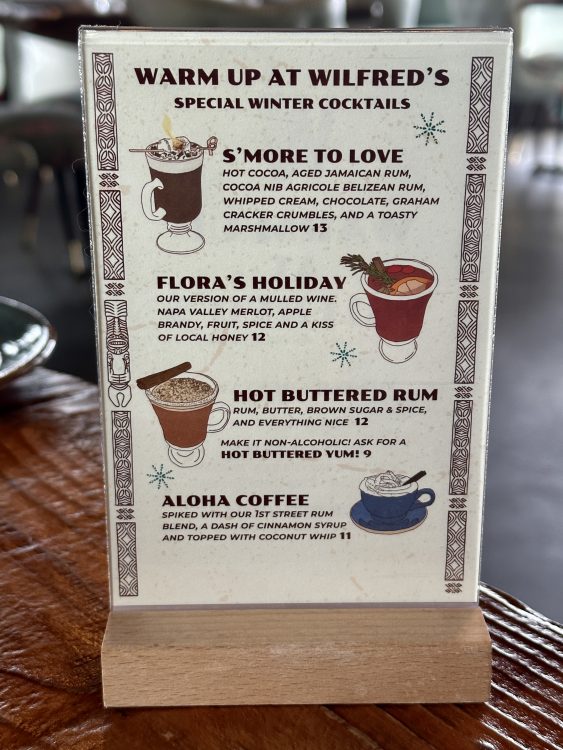 We were also pleased to see a hard-bound menu this visit, replacing the old floppy leather binder we had to use perviously. So much nicer in this format, but still plenty of space for pages of cocktails, rums, food, and even a section of available merchandise. The merch shelves inside the restaurant are looking nice these days.

We enjoyed our lunch last Sunday. I tried the burger for the first time and found it to be quite the delight. It comes with sweet potato fries, which isn’t really my thing but might be for you.

Fantastic new mug from Woody Miller made in the likeness of his huge carving at Wilfred’s Lounge in Napa. 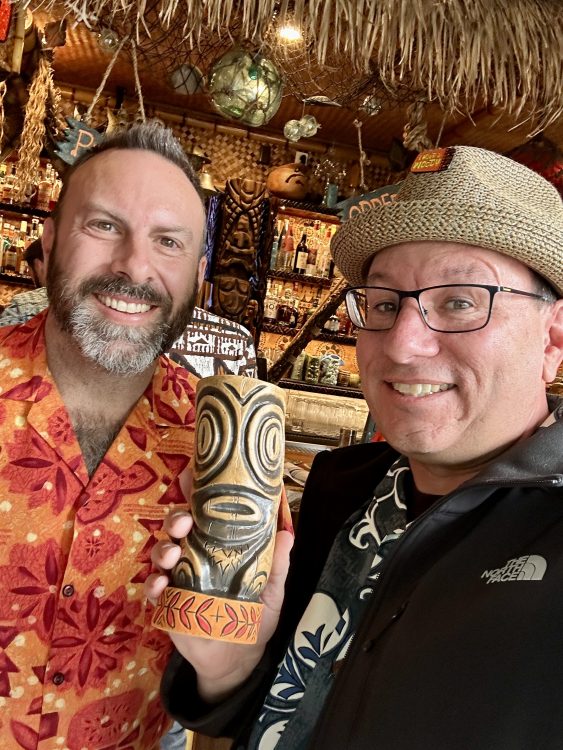 We didn’t do the signature cocktail but it seemed like it was well received by those in attendance. Wilfred’s made it easy to buy a mug with lunch and Woody signed the mug and posed for photos with good cheer. Another fantastic mug release for Wilfred’s in Napa.

I always feel great when I get a woody. 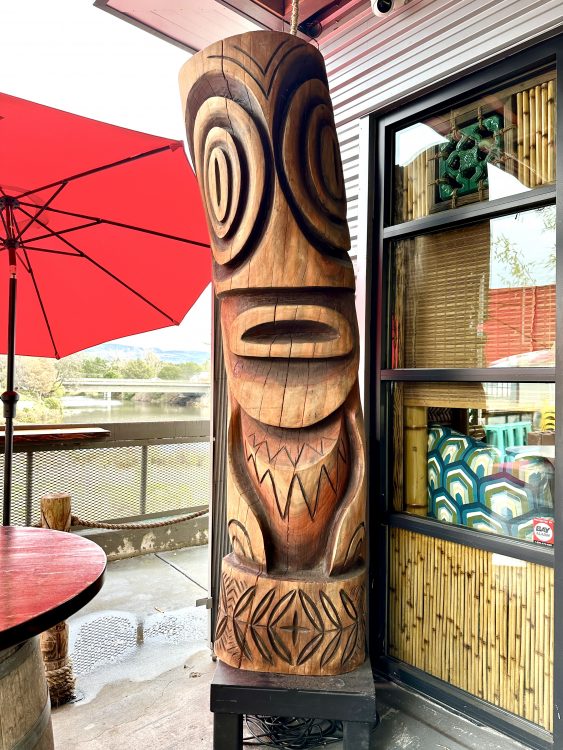 Getting married on a holiday ain’t bad when you both have the day off from work and can head up to Napa for an Anniversary lunch at Wilfred’s Lounge. Happy Anniversary @juliebeane. 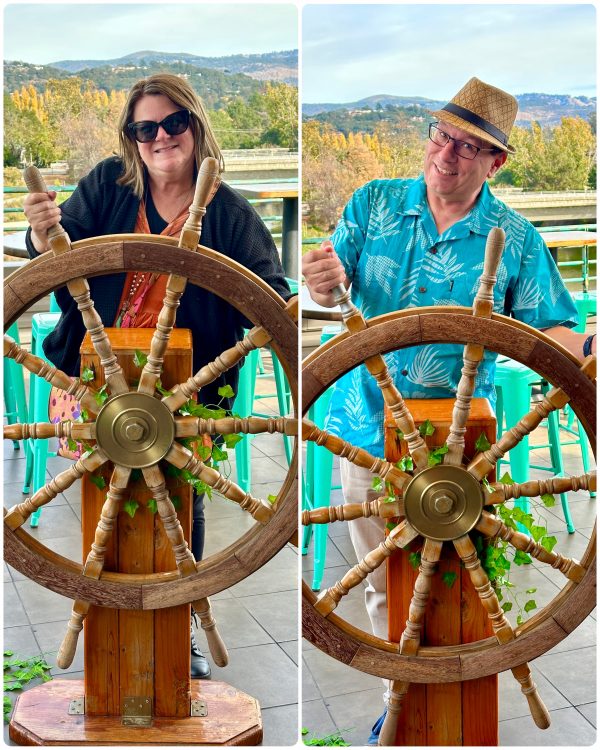 We had a great time at Wilfred’s. We appreciated the hospitality of the anniversary champagne, appropriate since Wilfred’s is celebrating their 1st anniversary today too.

Lunch was fab. We split the salmon rangoon, salmon entree and pineapple fried rice, really great. And I enjoyed the spam musubi. The Ono Pie is not to be missed. 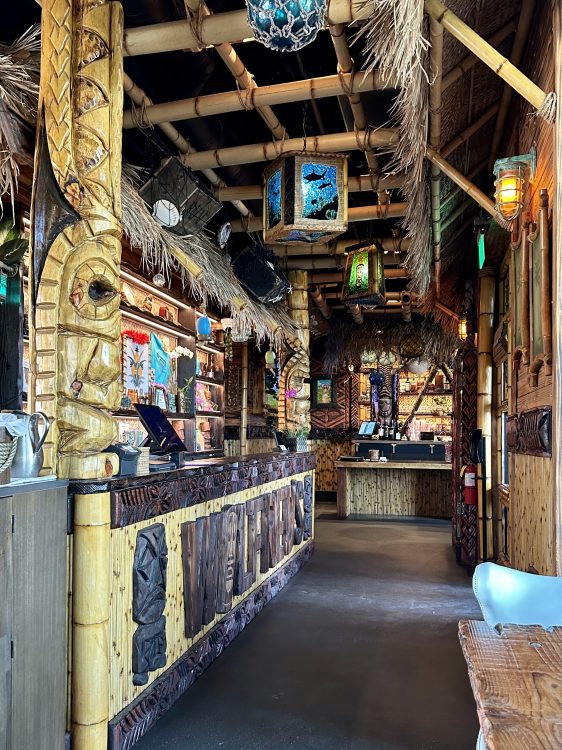 Cocktails are still on point. The Maximum Aloha remains Mrs Mai Tai’s favorite, a tart cocktail that can be sweetened with the banana whip cream. I tried the new Manta Ray cocktail that is a light blend of gin, rum, and wonderful flavors.

Cheers to @doc_parks and the team at Wilfred’s. Such a cool vibe inside, with friendly service and cool surf tunes playing inside.

Late summer seemed like a good time to venture up to Napa to check out the wine town including their very fine tiki bar and restaurant, Wilfred’s Lounge. They have a main entrance but the bar has open doors and you can order at the bar and drink there or take it upstairs to the deck or into the ship’s hull section.

We did a group dinner and given the size of the party we were seated on the patio. The restaurant isn’t large and so the patio is used as overflow and additional seating. While it’s not a dark immersive experience, there are worst places to hang out in the early evening given the cool breezes from the adjacent Napa River. And plenty of people watching.

The Hawaiian-inspired menu isn’t vast but we really liked the meal. I found my Kalua Pork to be just the right amount of greasy and and had a mild but very satisfying flavor. And we made sure to leave room for some ‘Ono Pie (don’t call it “Hula”) with coconut ice cream, macadamia nuts sprinkled on top with caramel, and cream. So good.

The cocktails remain on point. Their Mai Tai uses Jamaican and Martinique rums but these are not too challenging for the wine crowd and leaned a bit towards a lime cordial taste. The Doc’s Grog was quite fantastic. The strawberry cocktail called Maximum Aloha continues to impress, not sticky sweet like you’d expect but a tart leaning base to balance all the coconut banana whip on top. They have a very good rum collection and reasonable prices. As the menu says “call your spirit,” which I did (with please and thank you) for a Mai Tai with Denizen Vatted Rum.

Thanks to Doc Parks and the crew who did so well to service our group, even when it expanded mid-meal. Reservations are always helpful on a weekend, and Wilfred’s has a large collection of mugs and other merchandise for sale. I’m also a fan of the size/shape of their swizzle stick.

There are several distinct sections within Wilfred’s Lounge, including a small dining room off to the left when you enter. There are a few 2 and 4 top tables, plus a couple larger tables with lounge seats and cushioned bench seating. Out back there’s an enclosed patio with a rail, perhaps for overflow or maybe just to offer a place to look at the lovely view of the Napa river. Outside there’s a covered patio for outdoor seating with several tables and also some rail space facing the river.

The bar is off to the right when you enter, with space for around 8 chairs and a couple small two-top tables. It’s a little tight if the crowd is heavy, though there’s a glass door that can be opened up to allow for more breathing room. 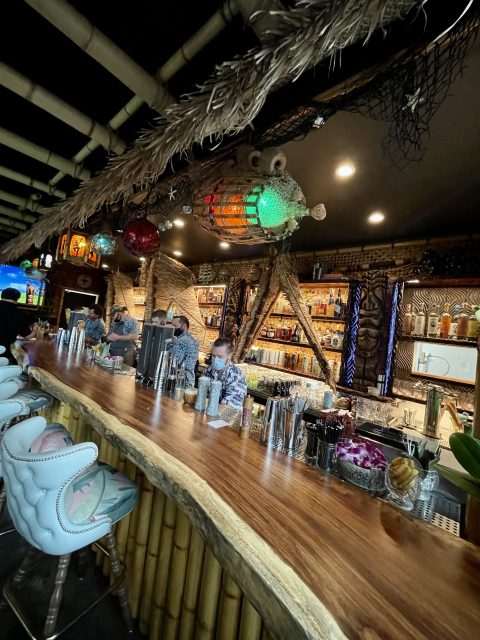 Wilfred’s has a second level, which is designed to look like a pirate’s quarters. There are a few places to sit in the lounge, which then leads out to the rooftop patio that overlooks the river. There are a few tables here, as well as ship’s wheel that could be popular for photos.

The decor is lighter and brighter downstairs and turns darker as you walk upstairs. Thunderstorms arrive every so often, and there’s a porthole screen with mermaids and a pirate skeleton. Outside two large tikis tell you that you’re in the right place. The decor is quite well done and includes plenty of nods to Komes family that owns the place.

Like any good tiki bar, there is merchandise for sale including mugs, Mai Tai glasses, and t-shirts.

When we visited, the music was a mix of Hawaiian-leaning tropical instrumentals and songs with mellow vocals. This set the perfect escapist mood, and I hope this musical trend continues.

The staff worked together quite well during our visit, coming back to refill water and take second round drink orders right on time. There was a mixup with one of our food orders but the staff totally rectified the situation right away without any complaint.

Wilfred’s Lounge is officially opening in Napa today, so this is an overview of the food and drink from our visit during the soft-open last week.

As a restaurant that is open for both lunch and dinner, Wilfred’s has a variety of appetizers and main courses, though not so much for vegans. We really enjoyed the Salmon Candy Rangoons, a very nice riff on the Crab Rangoon originally developed at Trader Vic’s. Such a nice chance of pace and just the right balance between the fish and the cheese. We also enjoyed the Coconut Shrimp. The Spam Sliders were a bit of a disappointment since the sauce was not particularly flavorful and so the sliders basically ended up as bread and Spam.

For the main courses, these were well-received and fairly large. At our table, we tried the Pineapple Fried Rice, Sticky Ribs, and Chicken Katsu, each of which was quite good.

And the cocktails? With Doc Park (ex-Pagan Idol/Zombie Village) at the helm, you know this is a strength. The 1944 Mai Tai is very solid, featuring rums from Jamaica and Martinique. This Mai Tai leans lighter than I prefer, but is a good fit for Napa’s crowd of tiki newbies. I really liked Batten Down the Hatches, with an exotic rum blend, pineapple, fassionola, lime, absinthe, and Doc’s spic. Very boozy (“limit 2 per customer”) and a ton of flavor.

Mrs. Mai Tai totally dug the Uma Ube with rum, cream of coconut, pineapple, and ube (and a name that’s a nod to a similar drink at Kon-Tiki). It’s a sweet and lovely coconut drink that comes in a really nice coconut mug and will be a big hit. Likewise, Maximum Aloha was the best surprise of the cocktails we sampled. Featuring strawberry-infused rum, lemon, cinnamon, prickly pear, overproof Jamaican rum and topped with a coconut banana whip. You’d think it would be sickly sweet, but it was much more tart than you’d expect, which means that paired with the whipped topping that you can easily adjust the sweetness. And this drink is super flavorful.

So, the summary is to go for the drinks and stay for the food.

The soft open for tiki ohana was tonight and it is time to add Napa to your Northern California tiki tours because Wilfred’s Lounge is fan-tastic!

Music? Lovely retro music including a variety of styles. Totally on point.

Food? Ranged from good to amazing. Fairly priced considering the quality and quantity. The Salmon Rangoon was the highlight.

Cocktails? Doc Parks’ cocktails were amazing. The Mai Tai was very good and several others were even better. Great mugs and cocktail glasses.

Service? Even during a soft open the staff were totally on point, super friendly and very attentive. Table service was very pleasant and easy. The bar was a little tight with packed attendance but the bar staff were very responsive.

More about Wilfred’s in upcoming posts, but suffice to say that this new tiki bar in downtown Napa is a hit. Wilfred’s officially opens on Friday, November 12.