We begin by describing the original recipe by Trader Vic, including the named components. Note that many of these are no longer available, so we’ve provided a simplified version and a discussion of the key ingredients.

The most iconic version of the cocktail is the Hawaiian or “Island-style” Mai Tai, using pineapple juice and a dark rum float. Those Mai Tais can be delicious and are covered below as well. 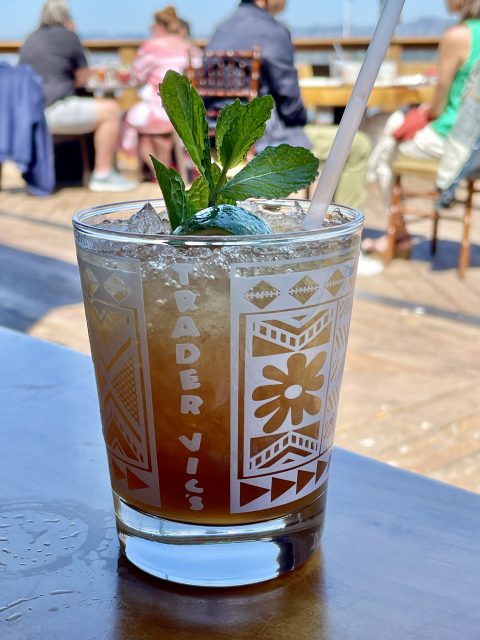 Rum(s) for a Mai Tai

The rum in good Mai Tais is typically aged and heavy, but that too could be based on your preference. Unlike many cocktails, the Mai Tai really lets the rum shine.

The original Mai Tai rum was from Jamaica, so that’s the country of origin for many Mai Tai rums you’ll find in bars and restaurants. You’ll often see Mai Tais made with Martinique Rhum, both traditional Molasses-based Rhum Industriel and also the more commonly found Rhum Agricole made from Sugar Cane Juice. The International Bartenders Association’s recipe for a Mai Tai specifically calls for Martinique Rhum made from Molasses.

The Ultimate Mai Tai rum blend is a bold blend of mostly Jamaican rums and is a boozy 52% ABV. Simply use ½ oz each in a Mai Tai, or combine equal parts of Appleton Estate Rare Casks Aged 12 Years (“Appleton 12”), Smith & Cross Traditional Jamaica Rum, Plantation OFTD, and Plantation Xaymaca into a bottle and use 2 oz when preparing your Mai Tai.

But with so many quality rums on the market, we certainly encourage you to try different rums and styles. There’s no wrong answer when it comes to the Rum used in a Mai Tai, so use your favorite rum or style, or simply use what you have on hand.

These are the two ingredients that separate the Mai Tai from the Planter’s Punch or Daiquiri. Some recipes omit the sugar syrup in lieu of more Orgeat, and some may use more or less Lime juice to balance the sweetness.

If you adjust the amounts of the ingredients you’ll find there are a lot of combinations, depending on your palate.

“Juice from One Lime” = One Ounce

Since the size of limes vary, the “juice of one lime” is an inexact measurement. Small limes might give you ¾ ounce or less, while large ones will give you more than 1 ½ ounces. I once had a lime give me more than two and a half ounces of juice!

So, juicing a large lime and using the “juice of one lime” might make your Mai Tais too tart.

We do have documentation on what Trader Vic considered the correct amount of lime juice in a Mai Tai, though. In his 1974 book Rum Cookery & Drinkery author Victor Bergeron noted on page 96 that “Juice of one average Lime = 1 ounce.” So, if you’re following Vic’s standard recipe 1 ounce of lime juice is the correct measurement.

Some bartenders omit sugar syrup from the cocktail, and then bring the lime juice down to ¾ oz.

In terms of which kind of Lime Juice to use, always use freshly squeezed Lime Juice. Someone told us that the organic bottled lime tasted just like fresh squeezed and we did a blind taste test. I didn’t even have to taste the fresh juice Mai Tai to know the bottled version was inferior.

Watch the video: Limes in a Mai Tai

The traditional garnish for a Mai Tai at Trader Vic’s is one half of the spent lime shell along with a mint sprig. These are placed into the top of the drink after mixing (never before), and they look a bit like a little island and palm tree. 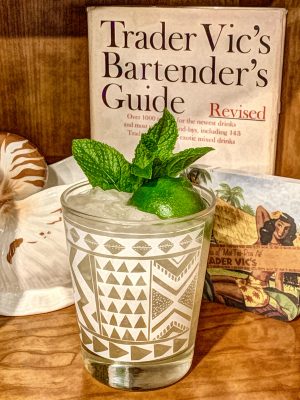 This is the house Mai Tai at Ultimate Mai Tai Headquarters. First labeled as the “Ultimate Mai Tai” when it was served as a special menu addition at The Kon-Tiki in Oakland and coming soon to the regular menu at Tiki Tom’s in Walnut Creek. This features our Ultimate Mai Tai Rum Blend with four heavy rums. Steve the Bartender calls this “a Mai Tai for Mai Tai lovers.”

The Ultimate Mai Tai Rum blend is used in other recipes such as in the Banana Mai Tai and the Ultimate Navy Grog.

The Island Mai Tai or Hawaiian Mai Tai is the iconic version of the cocktail, most likely the version that most people picture in their minds. Pineapple Juice and the Dark Rum Float were added to Mai Tais served in Hawaii starting in the late 1950s and were pervasive by the 1960s. That style is certainly the version that is most common in the islands today.

Some Pineapple and maybe some Orange Juice are okay in a Mai Tai, but when Amaretto is introduced replace the Orgeat and especially when heaps of Roses Grenadine are added it is no longer really a Mai Tai. As such, we don’t include those recipes here.

Mix in 16 ounce tumbler glass with shaved ice. Drop half a spent lime shell in the glass. Stir and decorate with fresh mint. This was supposedly the recipe served at the Royal Hawaiian Hotel according to Trader Vic himself.

One of favorite recipe variations. This looks like a typical Island Mai Tai but is closer to an original 1944 Mai Tai in terms of ingredients. This was easily our favorite in Waikiki and one of our Top 5 Mai Tais of all time. (Halekulani website)

This is perhaps the quintessential Mai Tai in terms of appearance. The pineapple juice and dark rum float are iconic and are the key elements to the Mai Tai for most people.

This recipe dates to 1972 from the book Drinks of Hawaii. Note that this Mai Tai does not have the dark rum float most typically associated with Island Mai Tais and included when you order one at the location currently. Though, I suppose, you could hold back the Dark Jamaican rum and float it. The scant 1 oz each of Orange and Pineapple were designed by Jeff “Beachbum” Berry in his books, and seems like the right balance for the rest of the ingredients.

Combine all the ingredients, except the dark rum, in a tall glass or shaker filled with ice. Shake, then pour into a tall ice-filled glass. Add a float of dark rum. Garnish with pineapple, cherry and a paper parasol. Michael Thanos, Forbidden Island (San Jose Mercury News, March 28, 2014)

Jason is a noteworthy craft bar owner and mixologist who says he prefers an Island style Mai Tai to the 1944 original recipe (which he cheekily calls “pedestrian” to see if it will get a rise out of me). So, it’s not too surprising to see this “scandalous” variant that adds more juice and sweeter ingredients. (Instagram)

Garnishes: half of a fresh Lime, fresh Mint

Add all ingredients into a shaker with ice. Shake and pour into a double rocks glass or a highball glass. Garnish with pineapple spear, mint leaves, and lime peel. (IBA)

Flash blend for five seconds with a cup of pure single ice. Pour unstrained into a tall glass adding more pure single ice to fill and garnish with few springs of mint. (Instagram)

Combine all ingredients in a shaker with cubed ice. Shake and dump into a double rocks glass. Garnish with a Mint Spring and the reserved Lime shell.

Combine all ingredients in a shaker with crushed ice. Shake and dump into double rocks glass and garnish with Mint Sprig and reserved Lime shell. Inspired by the Pampanito cocktail at Smuggler’s Cove, which features molasses syrup and originally used the same rum.

Combine all ingredients in a shaker with crushed ice. Shake and dump into a small snifter glass. Garnish with Mint and tropical fruit.

It’s like the Blue Hawaii and the Mai Tai had a baby. Featured in Issue 7 of Exotica Moderne.

If you like it a little less sweet you can try this adjusted version that omits the sugar syrup and adds lime juice.

Note the Mai Tai Swizzle is different than the Q.B. Cooler, another Don the Beachcomber cocktail that has been claimed to be a precursor to the Mai Tai.