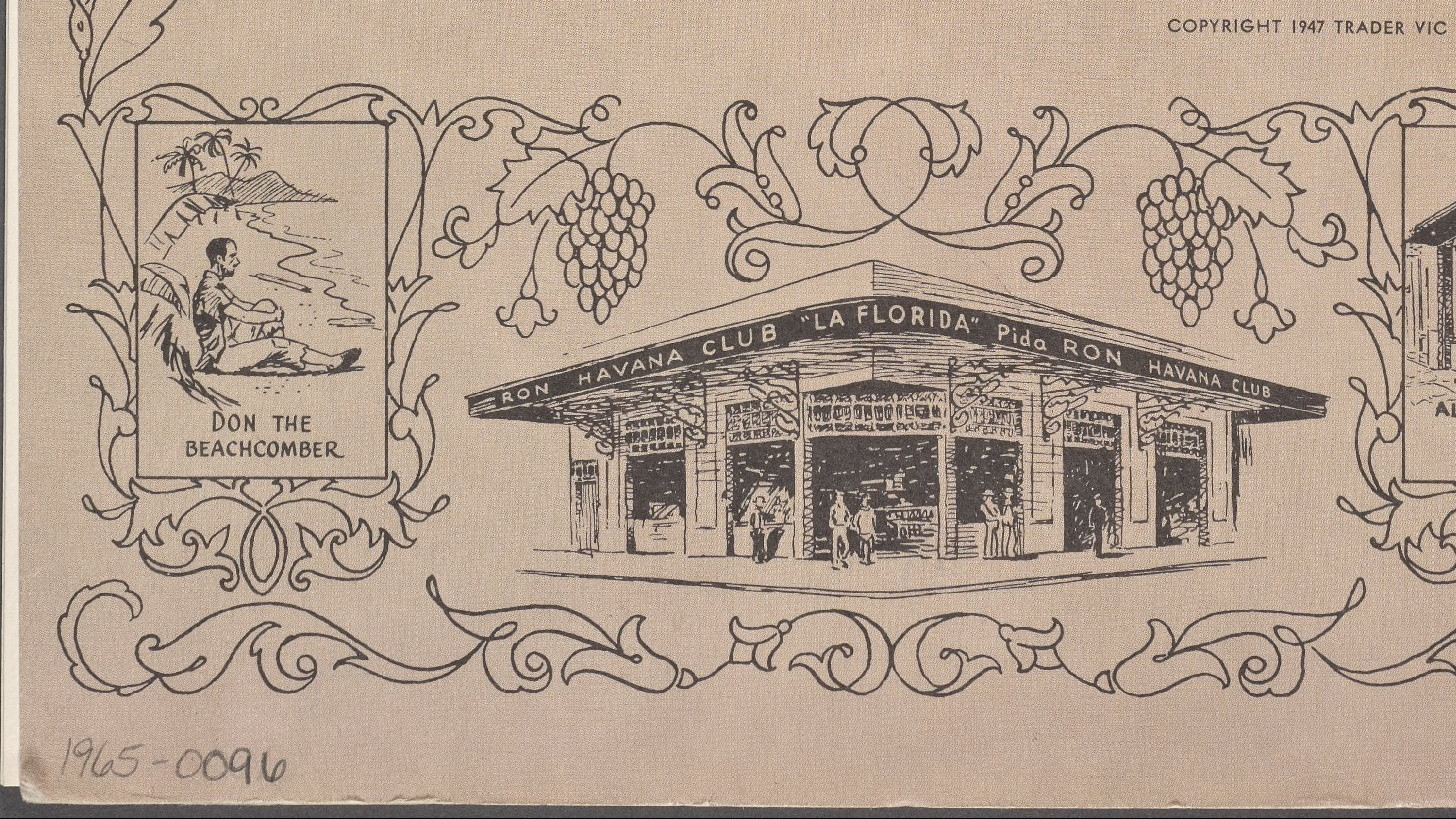 Let’s talk about the Q. B. Cooler. It’s the drink that inspired the Mai Tai. Or so the story goes.

If you’ve heard about the Q. B. Cooler it’s most likely because of a noteworthy section from Jeff Berry‘s 2007 book Sippin’ Safari. The book tells the stories of influential bartenders and cocktail inventors and is most acclaimed for being the book that presented the original recipe for the Zombie, a recipe thought lost. Berry was able to find the original 1934 recipe by talking to former Don the Beachcomber bartenders and their descendants, taking bits of information from one interview and pairing it with information from someone else.

In a book focused on people not familiar to the general public, there is a small section devoted to a character most everyone reading the book was already familiar with, Trader Vic Bergeron, and Bergeron’s most famous creation, the Mai Tai. And here is where the two parts of the book converged. You see, for years Don the Beachcomber founder Donn Beach claimed that he, not Bergeron, was the inventor of the Mai Tai. This debate continues until today, even decades after a 1970 settlement where Bergeron was declared the inventor of the cocktail.

But a specific new wrinkle emerged in Sippin’ Safari. Berry writes that Beach didn’t exactly claim to have invented the Mai Tai but a different cocktail that he accused Bergeron of reverse-engineering. The drink was the Q. B. Cooler, named after the fight squadron of pilots from World War I.

According to Beach, Bergeron had sampled the Q. B. Cooler during his visit to Don the Beachcomber in 1937. This visit was part of a sizable set of travels Bergeron made around that time, including visits to New Orleans and also to Cuba where he studied famed bartender Constantino Ribalaigua at the La Florida Bar in Havana (Constantine is chronicled in Beachbum Berry’s Potions of the Caribbean). When Vic returned to Oakland, he completely rethemed his bar and menu by adopting tropical decor, rum-based tropical cocktails, and developed the moniker Trader Vic. So, it is very clear that this trip had a monumental impact on the direction of Bergeron’s business.

Let’s take a look at the recipe for the Q. B. Cooler.

This cocktail does include many of the typical Don the Beachcomber recipe patterns, such as starting with the ingredients from the Planter’s Punch (Lime, Sugar, and Jamaican rum) and then multiplying them with a combination of citrus, sweeteners, and a blend of distinct rums. The taste and flavor of this blend of rums is something that would not have been bottled together in the 1930s, with flavorful Jamaican rum being tempered by a lighter rum, and then combined with a smoky Demerara rum. Most cocktails from Don the Beachcomber feature of blend of rums and Beach was famous for having said “what one rum can’t do, three rums can.”

The cocktail does differ substantially from many of Beach’s more famous cocktails such as the Zombie, Rum Barrel, and Test Pilot that used Pernod or Absinthe. White Grapefruit Juice was also used in many of Beach’s seminal cocktails, including the Zombie and Navy Grog. So, this Q. B. Cooler does seem to be part of the Don the Beachcomber cocktail style but in some ways is also bit of an outlier.

Beach’s claim is that Bergeron tasted the Q. B. Cooler in 1937 and then used that as a template to derive the Mai Tai. He told this story many times, including to journalist Rick Carroll (see the essay on our site: Harry Yee, King of the Tropical Cocktails). This story was noted by Berry in the couple of pages about the Mai Tai in Sippin’ Safari, and while Berry did say that he preferred Bergeron’s creation, he also noted that the Q. B. Cooler tasted “remarkably similar” to the Mai Tai. Berry additionally said “Even more remarkable is how Vic re-created the Q. B. Cooler’s flavor using entirely different ingredients: the two drinks have nothing in common except lime and rum.”

In several seminars about the Mai Tai, I’ve heard Berry extol the virtues of Bergeron’s palette. But Vic would have to have had superpowers to invent the Mai Tai in 1944 by recreating a cocktail he last tasted in 1937. The Mai Tai has its own fantastical origin story, where Bergeron supposedly was futzing around at the bar when friends from Tahiti come to visit and were served the cocktail for the first time and then had them exclaim that the drink is “The Best” in Tahitian. It is an origin story worthy of skepticism. But Bergeron recreating a cocktail he tried six or seven years earlier? That story requires a deeper level of suspicion of disbelief.

But let’s take the story as gospel for the time being.

It does seem quite remarkable indeed that Bergeron could recreate the Q. B. Cooler using half the ingredients. The Mai Tai has lime, sugar, Jamaican rum, orange liqueur, and almond-based Orgeat syrup. This seems too good to be true, so we set out to make a Q. B. Cooler and see how it compares. We tried this using several rum combinations and a couple different ginger syrups but each time we came to the same conclusion: the Q. B. Cooler is a refreshing tropical cocktail that tastes really great. But it doesn’t particularly taste like a Trader Vic’s 1944 Mai Tai. And I’ve had more than a couple Mai Tais in my life.

Next I polled some fellow cocktail enthusiasts. None them seemed to think the Q. B. Cooler tasted much like a Mai Tai. Several expressed mild surprise, based in part on the notion originated by Berry that the two cocktails were “remarkably similar.”

So, I decided to go back the source and ask Jeff Berry about this. He told me that when he serves both drinks as part of a 90-minute Mai Tai seminar he’s presented around the world, the audience is “usually split about 50/50 when I ask them if they think the QB tasted like a precursor to the Mai Tai.”

Berry’s comment has a notable inclusion. He considers the Q. B. Cooler as a possible precursor to the Mai Tai, not necessarily a drink that Bergeron was trying to replicate exactly. Berry said “To me the ‘remarkable’ similarity lies in the QB being a viable inspiration for Vic as opposed to a hard-and-fast template. I can see how he could taste that drink and then, using it as a foundation, tweak it to eventually arrive at the Mai Tai.” This nuance from the story repeated in shorthand by Sippin’ Safari readers does render a different view of the Q. B. Cooler from its usual place as Exhibit B by the “Don people” in the cocktail community’s never ending debate over the origin of the Mai Tai.

Today, Jeff Berry can’t help but acknowledge the uncertainty of the pedigree of the Q. B. Cooler, but with his trademark wit also reminds us there more than a little smoke here. Berry said, “Not everyone agrees with me. And by extension with Mick Brownlee, who told me the story, or Rick Carroll, a journalist to whom Donn told the same story. That said, two historical sources confirming the QB story is two more than most drink origin stories get.”

The True Importance of 1937

The rivalry between Donn and Vic was legendary, as were the disciples of each of the famed restaurateurs and barmen. If one was trying to claim that Donn was the true father of the Mai Tai, I believe the Q. B. Cooler was chosen not because it is particularly similar to a Mai Tai but because it is simply the closest thing Donn had on the menu in 1937 that could credibly stand in as a Mai Tai precursor. You line up Don the Beachcomber cocktails and you’re not picking out the Zombie, Navy Grog, Three Dots and a Dash, or the Missionary’s Downfall. But the Q. B. Cooler, well that’s one end of a spectrum that doesn’t seem so far off from a 1944 Mai Tai.

If we’re looking to learn where Bergeron drew inspiration for his famed cocktail, though, it is probably from a different destination from that famed 1937 trip. The Mai Tai’s precursor is the Daiquiri. Many have compared the Mai Tai to this classic cocktail, and Bergeron was just as complimentary to Constantine as he was to Donn in his essay about rum that has graced the Trader Vic’s menus since the mid-1940s. There are dozens of Cuban-inspired cocktails in Bergeron’s 1947 Bartender’s Guide and there’s one that is quite close to a Mai Tai. The ingredients for a Santiago Cocktail-2 are rum, lime, sugar, and Cointreau. Add a little Orgeat, like Vic was famous for, and pull down a long-aged rum for special guests… well friends, you have a Mai Tai. 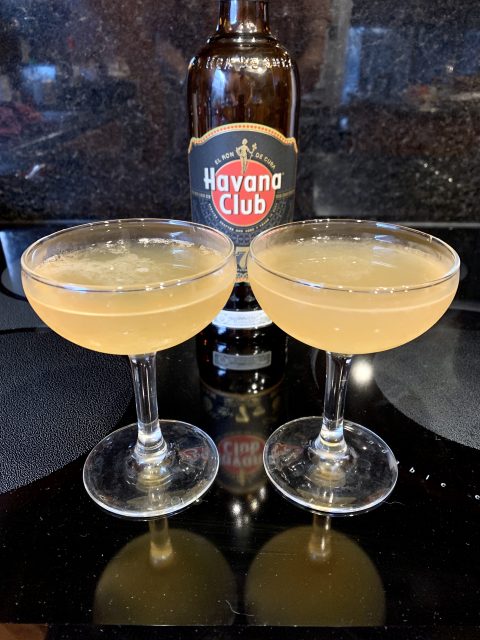 Orgeat is the key ingredient that makes a Mai Tai a Mai Tai. This was an ingredient that wasn’t used in Don the Beachcomber cocktails, but is featured in nearly all of Trader Vic’s most famous cocktails. The Fog Cutter has it, the Scorpion has it, and the Mai Tai has it. It doesn’t taste anything like the Falernum and Ginger Syrup that are the key sweeteners in the Q. B. Cooler.

Occam’s Razor tells us it would have been an easy “plus” for Bergeron to have added orgeat to the Santiago Cocktail to give it additional depth. This was an experiment that is easily attempted at home, so we prepared two Santiago Cocktails and added ¼ oz of Orgeat to one of them. The cocktail with Orgeat was much closer to a Mai Tai, even when using a lighter Cuban rum. Use a heavier rum, more Orgeat, and richer sugar and then serve with crushed ice, that’s a Mai Tai.

Nobody really know how exactly the Mai Tai came to be. Maybe Bergeron had a cocktail earlier than 1944 with rum, curaçao, and orgeat but was stuck with a forgettable name which he smartly rebranded as “Mai Tai” after his Tahitian friends came to visit. Maybe that drink was originally made closer to 1937, when the exotic cocktails Bergeron tried on his trip were still top of mind. We’ll never know. But it can be fun to speculate while drinking a Mai Tai, a Santiago Cocktail, or even a Q. B. Cooler.