Mai Tai Monday is from Dr. Funk, again. Honestly, I wasn’t planning to have the amazing Dr. Funk Mai Tai, but when a certain someone buys a round for the table in honor of birthday boy @vonschiltach, I’ll consider it a blessing. Mahalo! 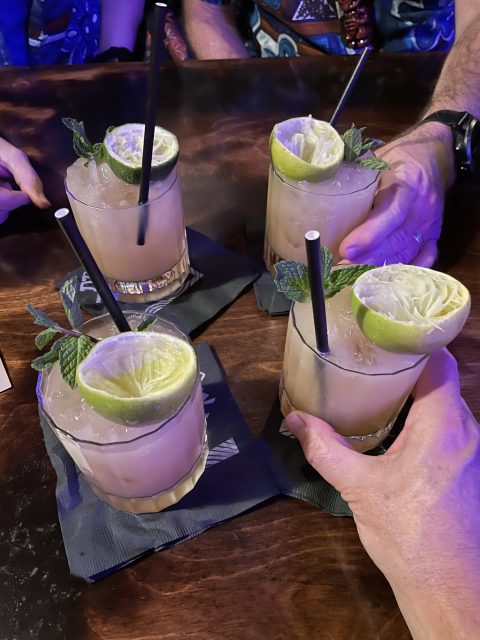 Dr. Funk was quite busy on Saturday, as you’d expect on a weekend. But there was also a Sharks game and some temperate conditions, so the entire inside of the bar and the outside patio were all filled. There was even a private party all the way around the side the building. But, the staff at Dr. Funk were really working well and our service all evening was great and the cocktails were made perfectly. It was quite helpful that we had reservations (pro-tip!) and we also found the garage on 3rd street to be much easier to get into than the one we usually use on Market/San Pedro Square. 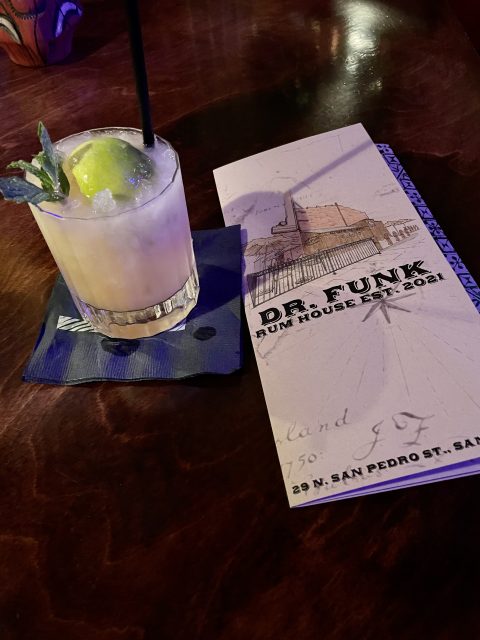 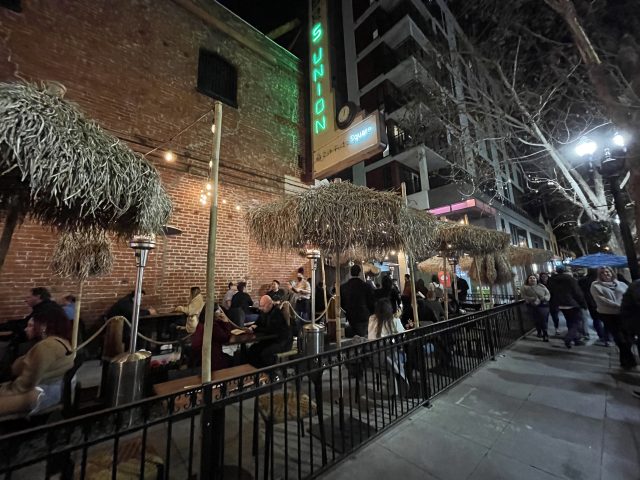 Mrs. Mai Tai ordered this pink “pinkglow” pineapple, which originated in Costa Rica. If you can get past this thing looking exactly like a side of ham, you’ll find it is a sweeter type of pineapple that is particularly tasty when cut up and eaten raw. Definitely not cheap to obtain but I thought it was worth trying at least once. 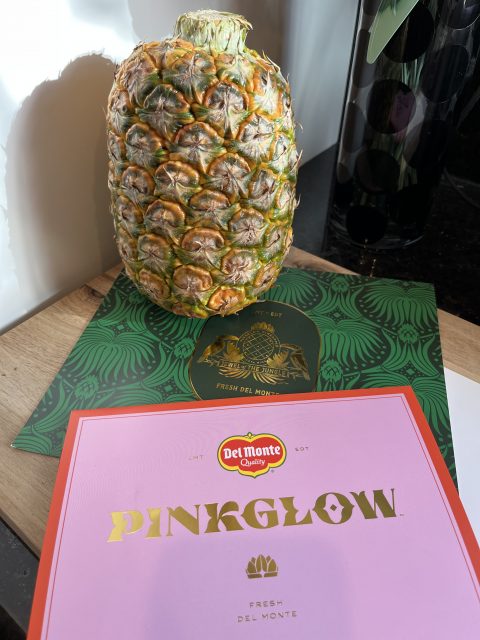 I got some juice while coring the pineapple, and while I didn’t go out of my way to “juice” the pineapple, I was able to get enough to try this out in a cocktail. I did a riff on the Blue Hawaii.

Call me a sucker but I liked this version better than the traditional Blue Hawaii with yellow pineapple juice. 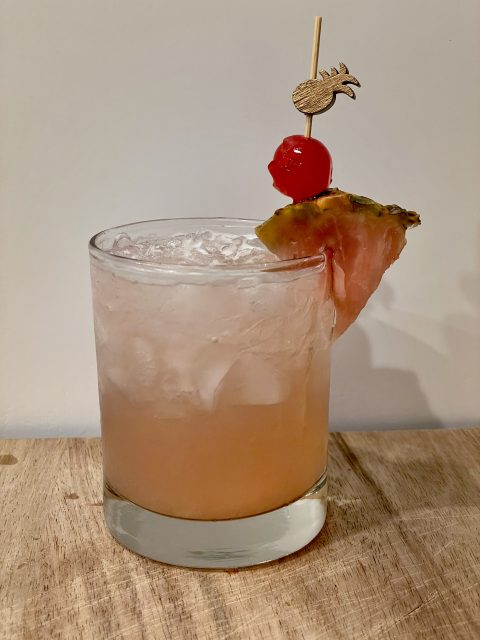 Pinkglow pineapples are available from Del Monte at  www.pinkglowpineapple.com and cost $40.

I ordered Cuban Cocktails and while there are some nice things about it, there are some significant flaws. This 2016 book comes from the team behind the Death & Co. and the NYC Cuban bar Cienfuegos that closed a couple years ago. The book starts with a history of Cuba and cocktails from the country, including rum that is the key ingredient. Written in 2015 when the Obama administration eased travel restrictions, the book is a sad reminder of the subsequent travel restrictions that remain in place to do this day. 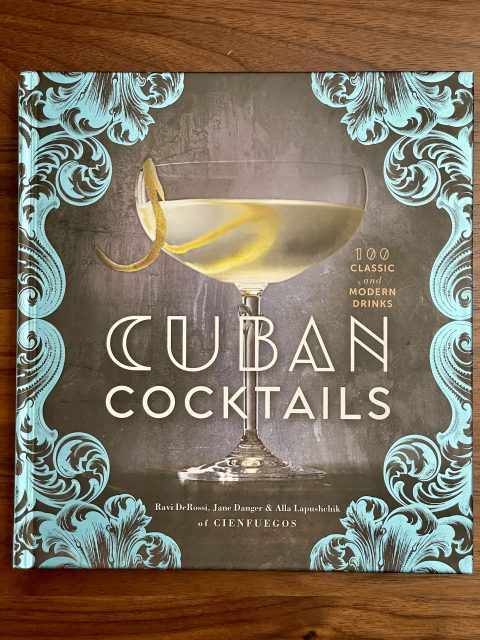 The book takes a chronological approach to the presentation of the recipes, starting the early punch recipes and then moving forward in time to daiquiris, tiki, and present day. While a number of historical recipes are included, there are also modern approaches to these style of cocktails.

The problem is that while many recipes name-check specific brands, none of those named brands are Cuban rum. Nor are there any suggestions for what kind of rums a US consumer should procure for these recipes. After pages of specific references to Appleton, Smith & Cross, Flor de Cana, and El Dorado the Daiquiri chapter only references “white rum” or “light rum.” This seems to be very curious omission, since Cuban rums aren’t available in the United States. And I doubt these craft cocktail bartenders are using the standard bearer for white rum, Bacardi Superior. The whole point of learning from professional bartenders is to learn what kind of ingredients they use so that the home bartender can elevate their game. There isn’t really any coverage of Cuban brands either, apart from photos that show the Havana Club logo on glassware and bottles.

Was pleased to attend a special event last night at Trader Vic’s which was a fundraising effort for the people of Tonga who were affected by the recent volcanic eruption. Trader Vic’s organized a silent auction to raise money through the Fraternal Order of the Moai, and a series of guest bartenders each of whom did a riff on the Trader Vic’s cocktail the Tonga Punch. The event was held in the Cabin room and included a DJ, some small bites from Trader Vic’s, and some rum tasting from Zaya and Bacardi. There were Tongan dancers performing as well. 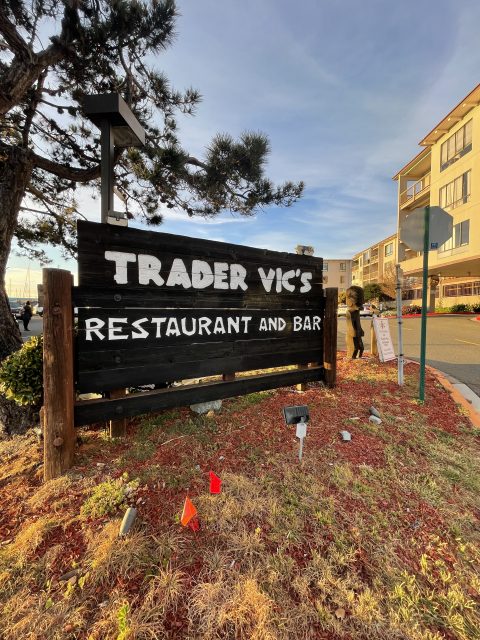 It is so great that Trader Vic’s continues to be a central point of gathering for the community, and that fellow tiki bars, bartenders, and artists are able to work together for a good cause. There were a lot of great items at the silent auction, including lots of tiki mugs, gift cards, glassware, and even some tikis and masks.

Mrs. Mai Tai and I arrived early, so I had Trader Vic’s Tonga Punch, a sweet cocktail that’s easy to drink with light rum. Marie’s King’s version used heavier rums from Trader Vic’s and Wray & Nephew, along with pomegranate grenadine. This one was the best of the evening that I tried. But I did also enjoy the Tonga Punch from Jeanie Grant, a version using a variety of exotic rums/rhums and allspice dram. The punch from Trader Vic’s alum Ismael Alejandro was fruity with an agricole base that was also very good. So cool to try all these recipe riffs.

If you have the means, please consider donating.

It’s always nice when the drink menu provides guidance on the booziness of the cocktails. I was looking for something lower on the scale that I hadn’t tried yet at Dr. Funk and the Patron & Saints was recommended… or maybe prescribed. You know.

Patron & Saints is “a funky milk punch made with Jamaica’s Overproof Rum-Bar, Denizen, Southeast Asian pandan, rich Madagascar vanilla & citrus. Enjoy as a single serving or double serving.” Most definitely sweet and satisfying, heavy on vanilla and served over a big rock of ice. 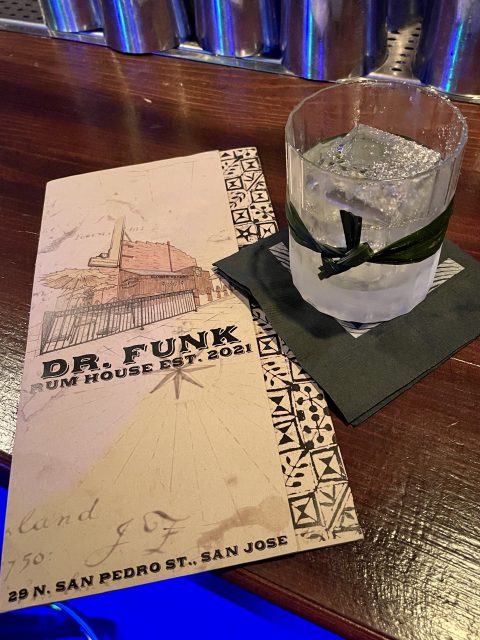 Why two copies? For very important reasons we’ll get to. 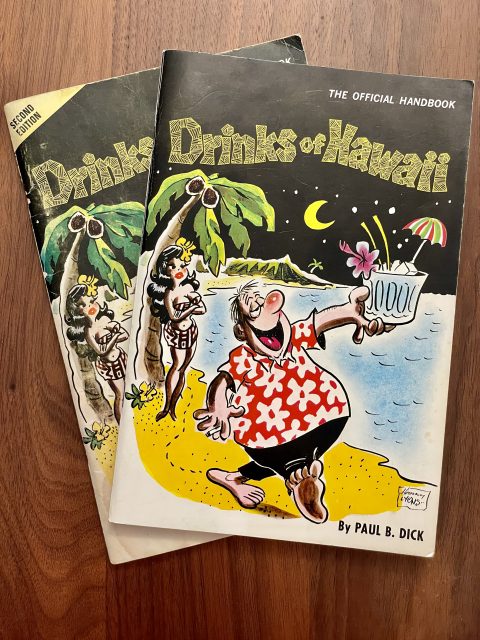 I’ve been doing some research on the evolution of the Hawaiian Mai Tai. Contrary to popular belief, the Mai Tai did not land on the shores of O’ahu and have pineapple juice added immediately. In fact, it took into the 1960s before pineapple juice was commonly seen in published recipes. But the Mai Tai that became the “top tourist tantalizer” (as described in Honolulu newspapers) was not quite the 1944 recipe either. It more clearly resembled the recipe we covered on UltimateMaiTai.com as the 1956 Mai Tai, made with light rum as well as Jamaican rum.

When did the pineapple juice get added? We started to see this in published recipes starting in the early 1960s. The Royal Hawaiian Hotel, where the Trader Vic introduced the Mai Tai to Hawai’i, seemed to not switch over to this style until quite late – the early 1970s.

We thank Jeff “Beachbum” Berry for the reference, the recipe book Drinks of Hawaii by Paul B. Dick, originally published in 1971. Except that the 1971 edition features two Mai Tai recipes and neither is from the Royal Hawaiian.

Appleton Punch rum was the successor to the Dagger line and was a dark Jamaican rum at 43% ABV. 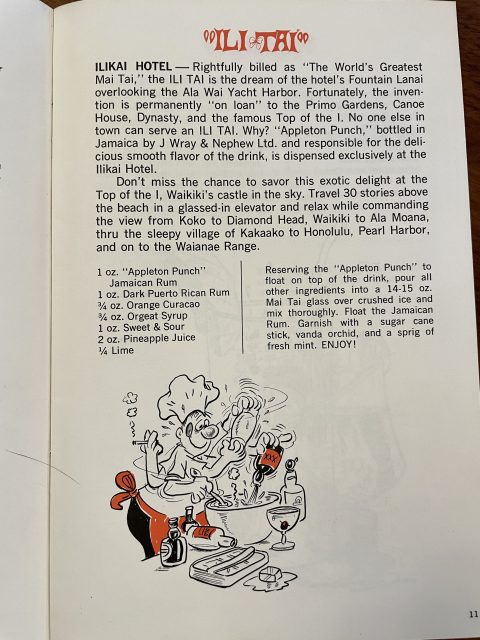 The elusive Royal Hawaiian Mai Tai didn’t appear in the first edition of the recipe book Drinks of Hawaii, so we sought out the 2nd edition published a year later in 1972.

As with the first edition, there are two Mai Tai recipes starting with the “authentic unadulterated copy of the original recipe” shown above.

* Dash in this context is equivalent to ¼ oz.

How much Pineapple Juice and Orange Juice? It doesn’t say (Beachbum Berry suggested 1 oz each). This is a very different Mai Tai with darker and more flavorful rums, to balance all the added juices. This style of Mai Tai isn’t my favorite, but they’re certainly popular on the islands. 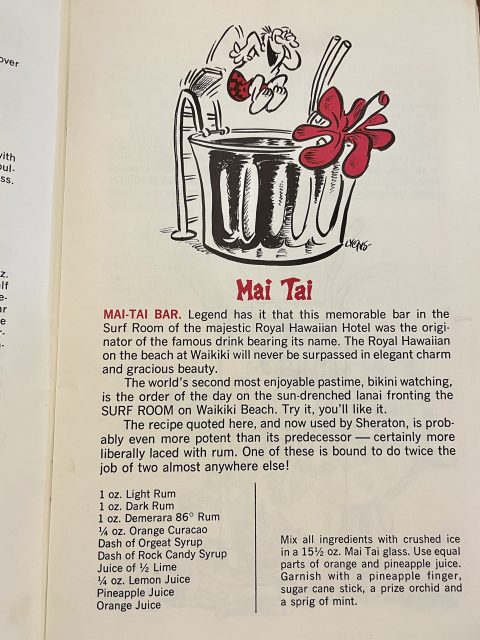 Drinks of Hawaii is an interesting book. There are some classic Don the Beachcomber recipes including the Pearl Diver and Navy Grog, but also 70s favorites like the Harvey Wallbanger and Margarita. Era-specific cartoons are by Honolulu political cartoonist Harry Lyons.

Look for my article on the evolution of the  Hawaiian Mai Tai in the next issue of Exotica Moderne (and contemporaneously at UltimateMaiTai.com) in May. 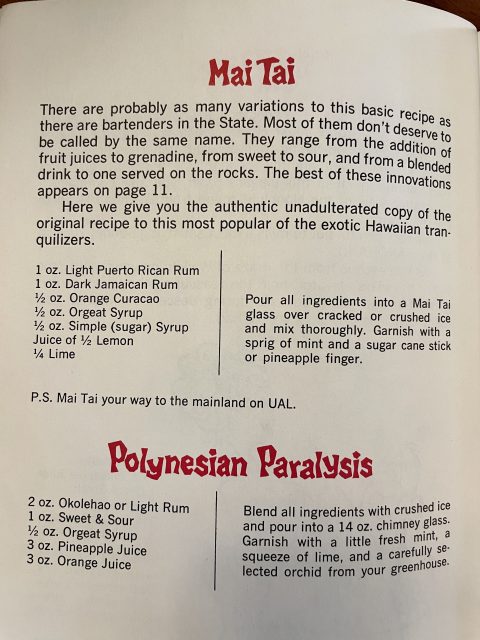 Pleased to say that the Dr. Funk Mai Tai is still excellent. We can’t get enough of this flavorful Mai Tai that features two of our favorite Jamaican rums: Appleton 12 and Smith & Cross. The house-made Orgeat is quite excellent as well. 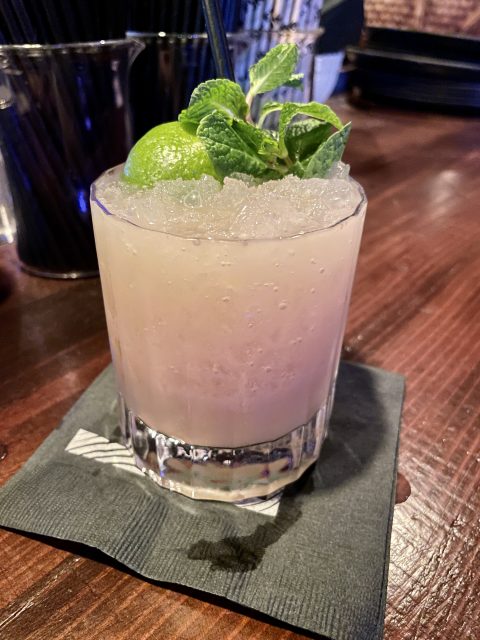 I tried this Chief Lapu Lapu riff with my remaining Blood Orange juice. This was far more satisfying than the Paradise Cooler, thanks to the heavier rum included. The recipe calls for Passionfruit Syrup but since I was out of that I substituted some of Pearl’s Hideaway Fancy Falernum instead. This was quite good. 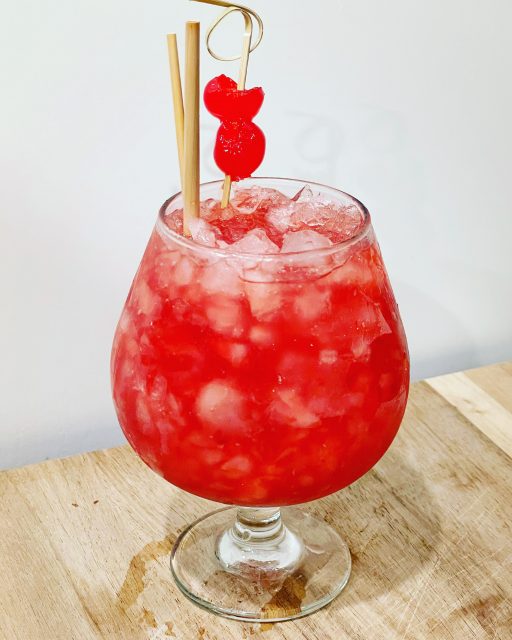 You know that a bartender knows their stuff when don’t flinch when you order an off-menu cocktail. In this case, it was the ask for a Saturn at Dr. Funk in San Jose, and Paul McCoun  made a great one.

The Saturn is a late-classic era tiki cocktail with Gin, Orgeat, Falernum, Passionfruit Syrup, and Lemon Juice. Every tiki bar should have these ingredients and this is a well-known cocktail so it shouldn’t be an issue to order one, but sometimes you never know. I like Dr. Funk’s Mai Tai, so wanted to try a cocktail that also used Orgeat, and the Saturn is one of my favorites. The original specs called for the Saturn to be blended, but I find it is better when served up – and that’s exactly how Paul prepared it. Paul even made a cool planet-with-rings garnish. 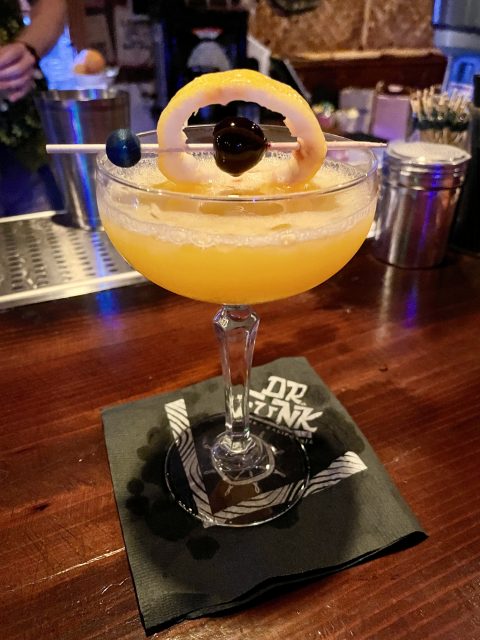 Every cocktail I’ve had a Dr. Funk has been great, and I hear an updated cocktail menu is coming soon. Looking forward to see what else the medical staff come up with.

I had some Blood Oranges and thought I’d try using them in some cocktail recipes that normally call for Orange Juice. First up is the Paradise Cooler, from the Total Tiki app for iOS. According to the notes from Beachbum Berry, this recipe comes from the Denver Hilton, circa 1960. I thought that this cocktail with Cherry Heering might go well with the Blood Orange juice. At least the color would be consistent. 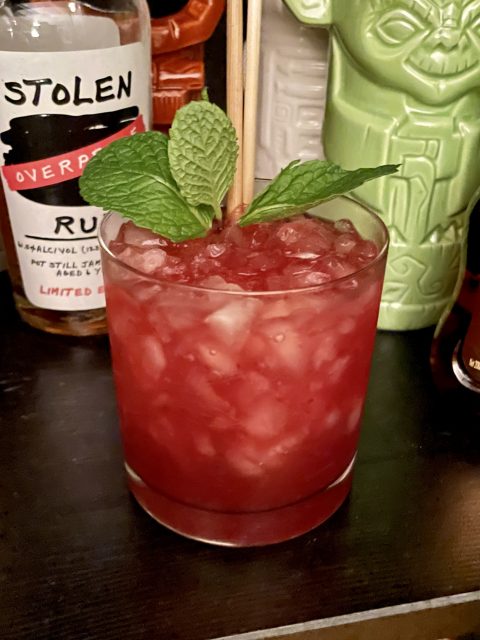 This wasn’t bad, and the Falernum was a nice addition (I used Pearl’s Hideaway Fancy Falernum No. 1, made by Laura Murphy). But with only 1 oz of light rum there wasn’t a lot of character to this cocktail.