There are some great destinations in the Honolulu area, including some great tiki bars. This list mixes commentary on those tiki bars along with some of the better places to get a high quality Mai Tai. 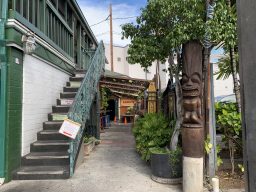 There are a number of truly lousy “tiki bars” in Waikiki, appealing to the tourists looking for overly sweet drinks with plenty of booze. Some of these (Cuckoo Coconuts, Lava Lounge) aren’t worth visiting, but Arnold’s Beach Bar is a step above and demands attention. There a number of well designed tikis here, and the venue’s layout makes things feel cozy and friendly, even though the place is largely open air. Drinks here lean towards beers and traditional tourist cocktails, though I found their $7 Island Mai Tai to be quite good. 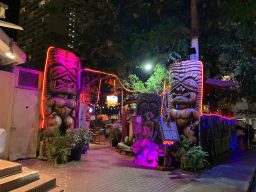 Do you love giant tikis made out of fiberglass? If so, this is your place. My Mai Tai was truly awful, served with a round slice of pineapple. Their website says it best: “Hawaii may not be the birthplace of the tiki tradition and Cuckoo Coconuts Waikiki may not be following the rules of Tiki traditions (Plastic cups, really?). Some may turn up their noses at our fun loving interpretation and approach to the culture of aloha and tiki, but what better place to drink a Freaky Tiki rum cocktail than Hawaii? We’ve got the beaches, the tropical weather, and the swaying palm trees. We’ve also got laws, rules, regulations, inspectors, landlords and vendors who insist how we have to operate (Plastic cups, REALLY!).”

If you like white table cloths with your cocktails, then House without a Key is your jam. Right out in the back of the hotel facing the ocean, it’s a wonderful place to sip their amazing Mai Tai. The Halekulani Mai Tai has a great rep and for good reason: it’s probably the best Mai Tai in Waikiki. The drink is an interesting hybrid between a traditional 1944 recipe and the Hawaiian style. The float of Lemon Hart 151 really adds a lot of flavor. I like the presentation with the sugar cane stick too. Service here was spot on and they have live music many nights. One of the highlights of any trip to Oahu. 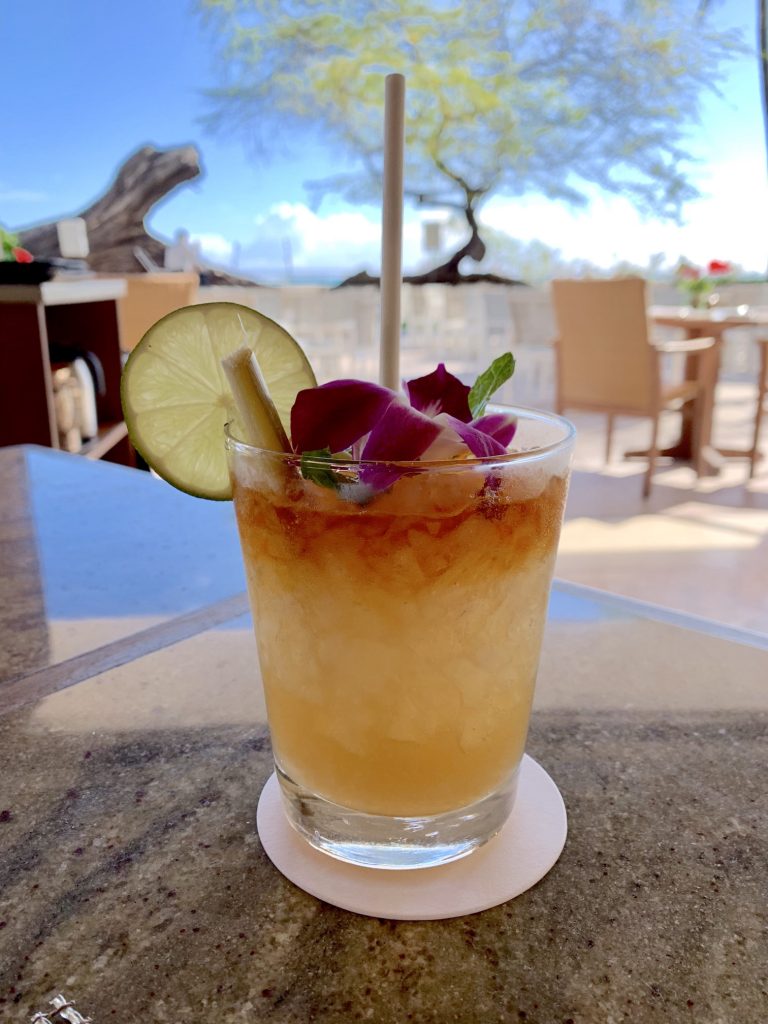 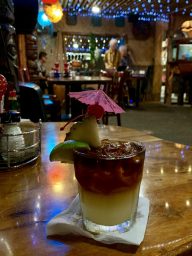 La Mariana. Perhaps you’ve seen it on recent seasons of Magnum P.I. The show wasn’t really filming there, but the bar on the show is inspired by the actual restaurant and bar that’s been serving customers since 1955. Functioning as an actual marina, La Mariana is located off the beaten path near Keehi Lagoon. You’d never just run into this place, which makes the effort to get here so worthwhile. This is truly a special place, incorporating decor and artwork from the tiki bars of yesteryear including Trader Vic’s and Don the Beachcomber.

Cocktails aren’t exactly craft-inspired, though I really loved my Island Mai Tai. Food and service are family friendly and there is music here on some days (I saw IntoxiKA play here, what a treat!). Another reason for La Mariana being in the news recently was a fight over whether or not they would lose their lease. Thankfully, an arrangement was made and a new 20 year lease was signed in 2019. Current status: La Mariana has reopened with a refreshed interior by local tiki artist Gecko. 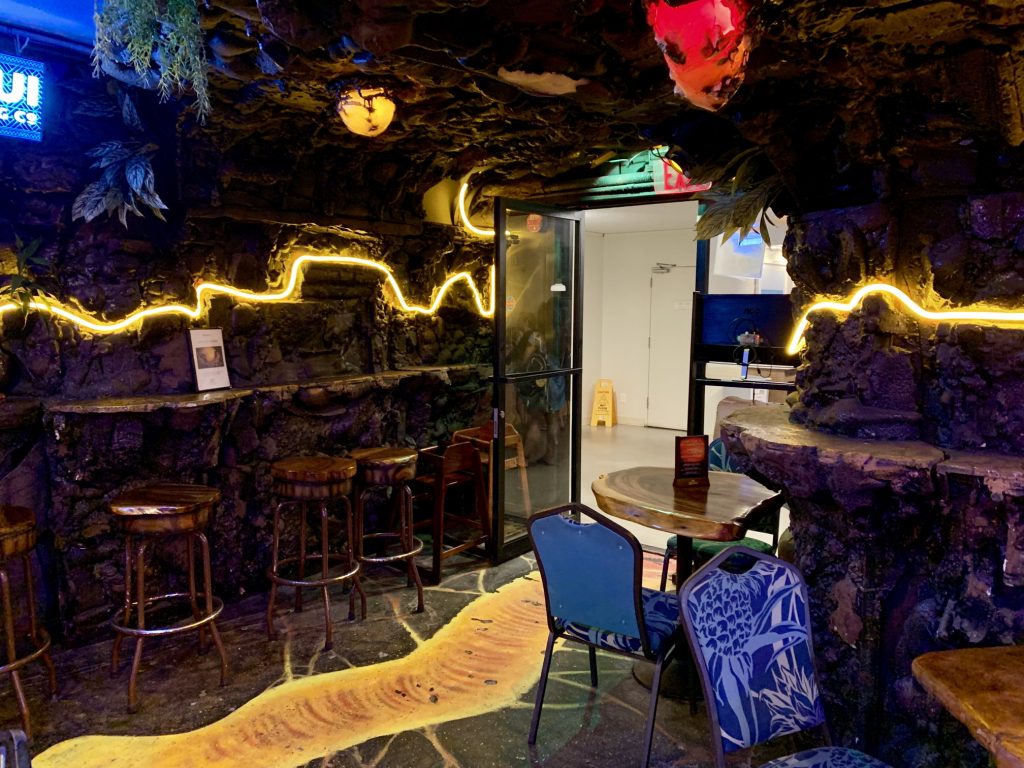 Generally forgettable, serving a cheap mango-forward Mai Tai, at least Lava Tube has some special effects and indoor seating to provide at least a little bit of a traditional dark tiki bar. This might be affiliated with Cuckoo Coconuts (not in a good way), but the staff here was friendly and seemed to be more locals oriented. They seem to have a little bit of everything on the food menu, so this might be a good spot to try some affordable Loco Moco or a Lau Lau Plate. The lava effects are not great, but at least they tried.

You have a number of Mai Tais to choose from here, from the original 1944 recipe to the famous Royal Hawaiian – and many more. Beach and Diamond Head views are amazing here, and this is basically hallowed sand in terms of Waikiki tourism. It’s ground zero for where the Mai Tai became world famous. Service here is efficient and friendly, though we thought the Royal Hawaiian Mai Tai tasted a little funny (maybe the OJ), but our 1944 was more than serviceable. And we did we mention the views? 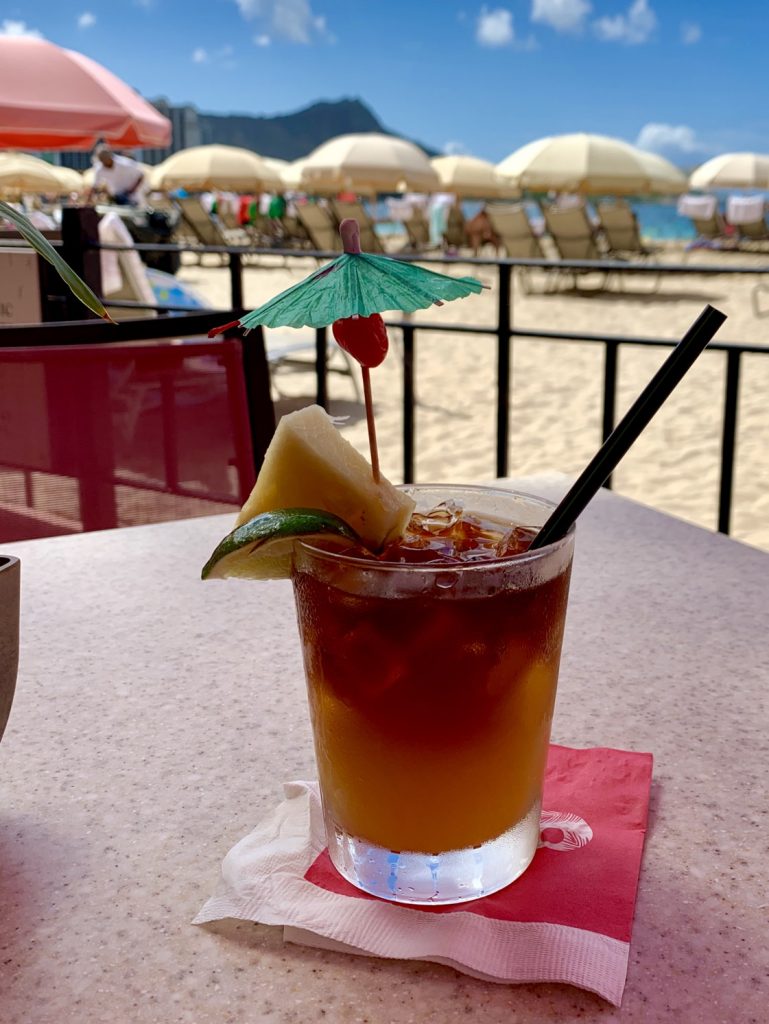 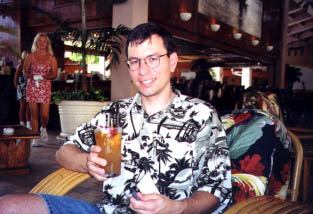 Mai Tai’s at the Ala Moana Center is reimagining of the old Mai Tai Bar that was in this location for decades, complete with DJs/local musicians playing live music, plus the same “classic attire” for the comely waitresses. That’s me in a photo, circa 1999.

When Mai Tai’s reopened under new management it was originally called Makai Bar, but they quickly rebranded to a more familiar name. Mai Tai’s is on the upper floor or Ala Moana Center and is a great place to unwind after shopping. The Mai Tai is the tourist version, appropriate for the location and overall party-bar vibe. 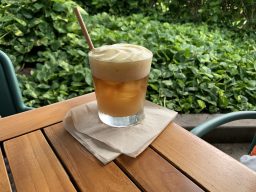 This Mai Tai was voted the best in Hawaii in numerous polls. Contains Kula organic silver and dark rums, with macadamia nut Orgeat and honey lilkoi foam. They say this one is the best. But it is not. It wasn’t even as good as the one at Arnold’s for less than half the price. Way too tart. Forgettable rum. The food program here is much better and perhaps worth the drive out to Ko Olina and fighting the crowd (making a reservation is recommended). Definitely a nice relaxing tropical vibe here. On our visit two young people were playing ukulele and it sounded wonderful.

What if a tiki bar opened in Honolulu’s Chinatown in 1920 and rather than closing instead continued on to present day. Well, the Skull & Crown is a close approximation. This craft cocktail bar and restaurant opened recently and truly represents a fully immersive tiki experience. Their cocktail program is top notch, and this was my favorite Mai Tai in Hawaii. There are some truly antique artifacts on display, providing a Hawaiian twist on traditional tiki bar decor. Best of all, the place feels perfectly sized to be the kind of place that would be your neighborhood bar if you lived nearby. Staff here is friendly and efficient, and don’t overlook the lush garden out back. This is truly one of the best tiki bars I’ve ever visited. 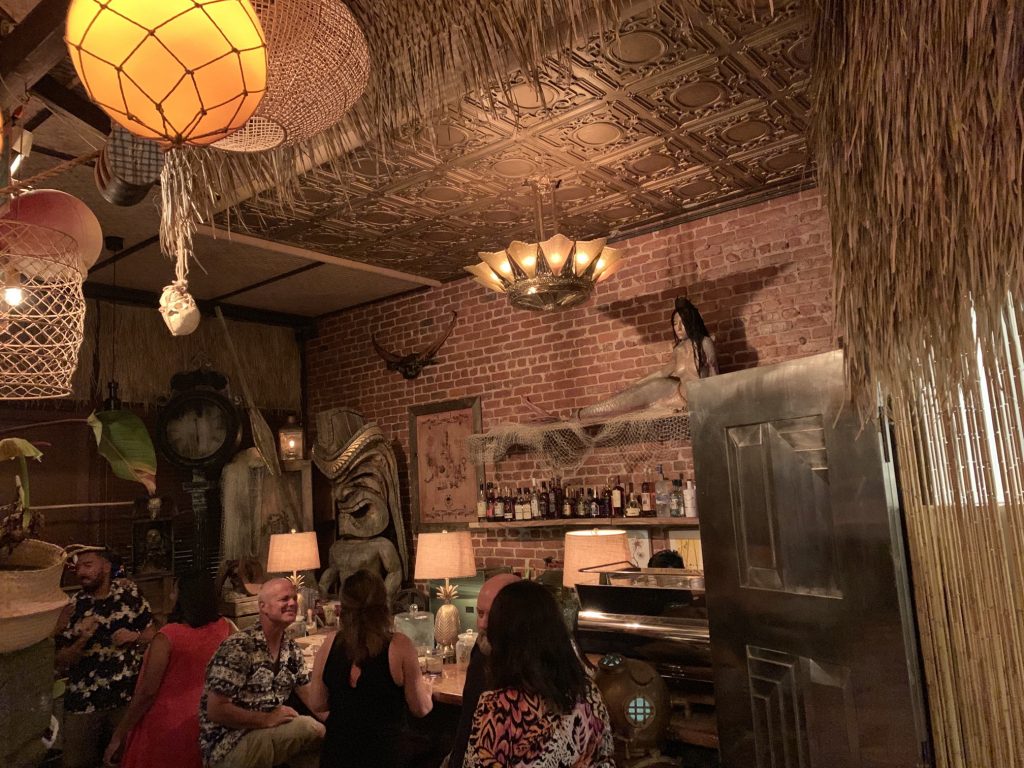 We didn’t hit this place on our 2019 trip but I wanted to include it here. This is a family style restaurant and tiki bar that is definitely in the “tiki tourist” mode. They’re doing some things right, like serving a 1944 Mai Tai. But that Mai Tai is served in a pint glass, so… The second floor location does offer some great views on the southern end of Waikiki. Reviews on Yelp are mixed but leaning positive.

Gone but not Forgotten

The Myna Bird – Craft Cocktails in a Food Court

The International Marketplace that Don the Beachcomber launched in the 1950s is no longer there, replaced a few years ago by an upscale mall (to compete with all the other upscale malls in Waikiki). Be sure to check out the tribute to Donn in the treehouse near the entrance. And for sure don’t overlook the small bar in the food court all the way in the back. The Myna Bird pays tribute to classic tiki bars and serves craft cocktails. This is a place where there are high-quality spirits going into classic tiki drinks and intriguing originals. Check out the Royal Jawaiian with rums, banana liqueur, and jerk seasoning, or the Endless Summer cocktail served in a can of Spam. The Mai Tai is made with their house rum blend (Appleton, Smith & Cross, Rhum JM, and KoHana Kea) with Creole Shrubb, lime, Orgeat, and Sugar Cane Syrup. It leaned a little too far in the Agricole direction for my taste but it definitely was a high quality Mai Tai.

The Myna Bird closed with the rest of the The Street Food Hall by Michael Mina when under during 2020, though the bar and decor has been mostly carried over to the new tenant, La Piña Cantina.

Update June 2022: the location has rebranded again and is now known as Tipsy Tiki, with a fresh menu and some fabulous cocktails. 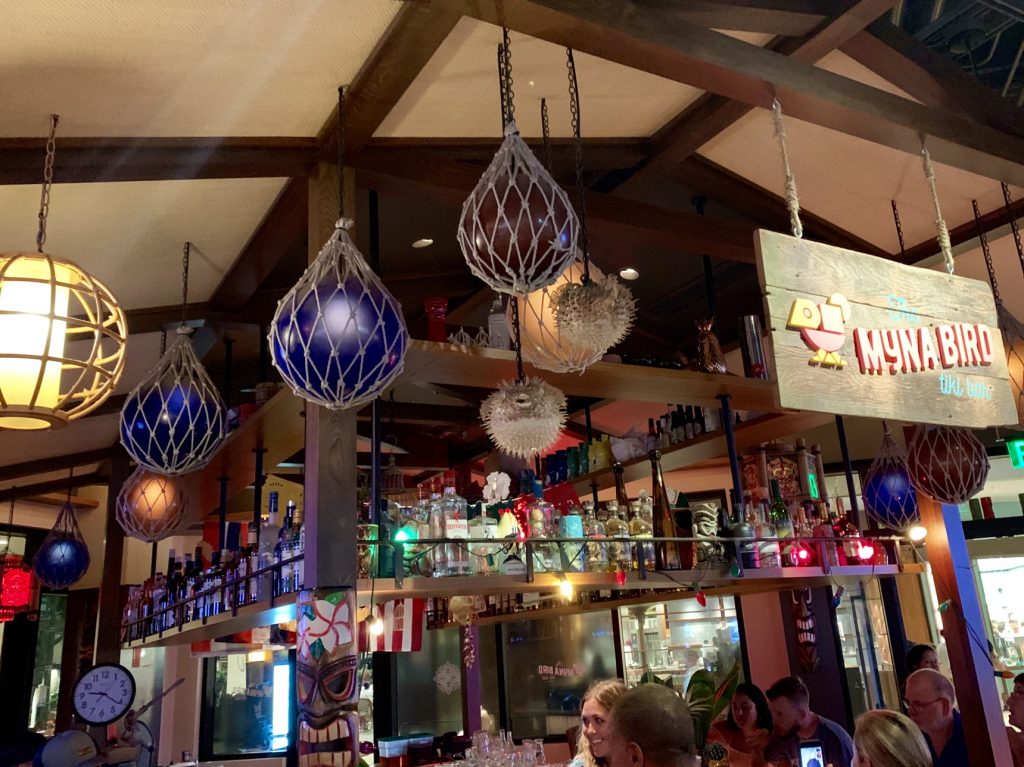 Eyebrows were raised when this place landed in a list of highest reviewed tiki bars on Yelp, but it was indeed worth the hype. Located on the second floor of the Home of the Brave World War II museum (909 Waimanu Street, Honolulu), the Wiki Waki Woo was a cozy extension of the museum that served tropical drinks and even hosted trivia contests. Our bartender was dressed in a vintage military uniform and this place felt like it could have been an Officer’s Club in 1943. Note that this was truly a speakeasy – you’d need knock on the door in Morse code and flash a special hand signal. Hint: fans of Don the Beachcomber’s WWII inspired cocktail may not even need to search the internet for the special knock.

Sadly, the Wiki Waki Woo closed in late December 2019 due to economic impacts including a location that lacked any sort of parking. The team is looking to possibly relocate but for now we’ve lost a unique destination that really stood out as being interesting and different. Another reminder that if you want to visit a place – then visit it. Patronize it. Tell your friends about it. And then patronize it again and again, before it’s lost.

Honolulu and Waikiki Talk on Tiki with Ray