Man does not live by Mai Tais alone, so many times I order other cocktails at a bar. Such was the time in early 2020 when I ordered a Navy Grog at Oakland’s Kon-Tiki. The bartender was Terry Six who knows my preferences for things to be a little sweeter, so while making the Navy Grog he winked and threw in some additional honey. That Navy Grog was the best I ever had, but soon thereafter Terry left Kon-Tiki to move to Southern California and so I needed to find a recipe to come close to replicating the “Ultimate Navy Grog.”

I started off by making the traditional Don the Beachcomber and Trader Vic’s recipes. Both feature Grapefruit juice, a hallmark of modern “grog” recipes. The rums called for are the same too, with 3 oz of rum including three of the most popular styles. So, these are largely similar, with the main difference bering that Don’s using Honey and soda, with the Trader Vic’s using Pimento Dram.

The garnish for the Don the Beachcomber Navy Grog was an ice cone where the straw goes through the top of the cone, something Terry Six built on the fly for my Navy Grog at The Kon-Tiki. Today, these ice cones are available from Cocktail Kingdom. Meanwhile, Trader Vic’s traditionally garnishes with a rock candy stick. This is said to allow the customer to stir the drink with the rock candy stick to sweeten the cocktail to their liking. In practice, I’m not sure how much a rock candy stick ever dissolves. A more likely explanation for this substitution by Trader Vic’s is that from a distance this actually looks similar to an ice cone, with far less effort to prepare.

These tasted fine but felt a little thin and one-sided.

Next I turned to a recipe provided by a bartender from one of California’s most excellent tiki bars (who shall remain anonymous).

This recipe is a mix of the two historical recipes and for me tasted a lot better. They Honey balanced out the Pimento/Allspice very well, and I liked the soda floated on top.

But this was still not the heavy, rich Navy Grog that I was spoiled with at The Kon-Tiki. And with only two ounces of rum it seemed a little less potent than the Navy Grog’s reputation So I decided to experiment with the spirits and ingredients. 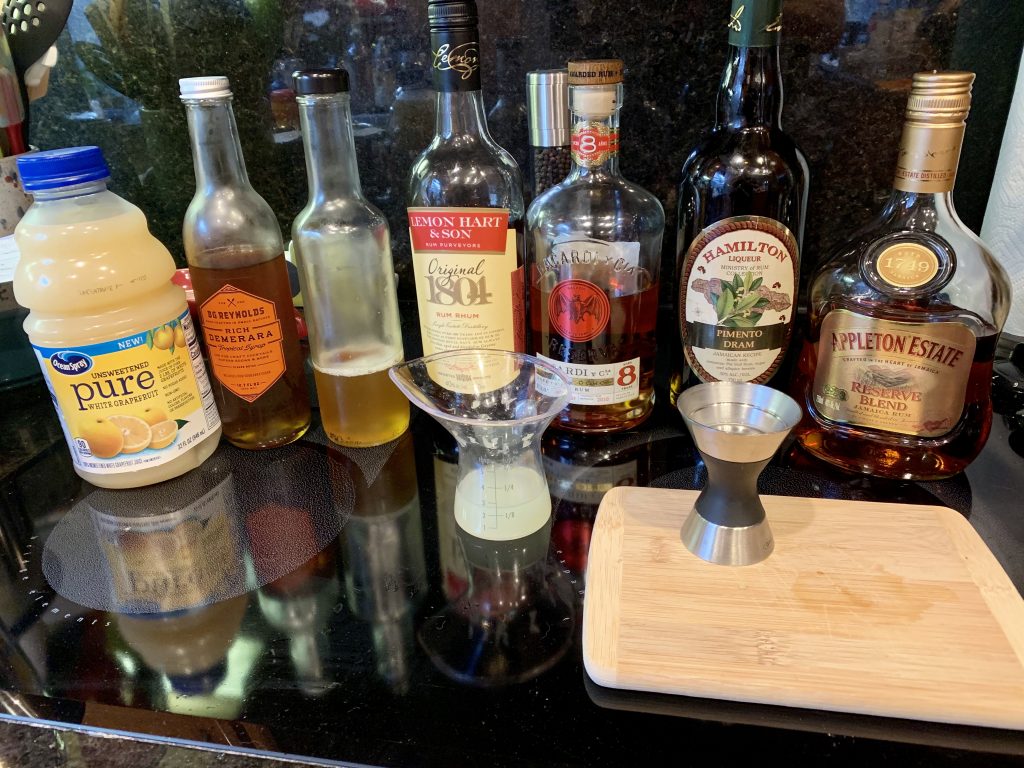 The historical recipes lean on a mix of rums, including some lighter ones. But I felt that the rum should be darker and heavier, so I turned to an old standby: my house Mai Tai Rum blend. This is a mix of rums largely from Jamaica and this blend has a higher ABV ratio that I think would be appropriate for a potent Navy Grog.  I combined this rum with Lemon Hart 1804, a mainstream Demerara rum at 43% ABV. I also decided to go for the full three ounces of rum in the cocktail.

I really liked the soda in the modern riff, so I wanted to keep that in the recipe. But I also wanted a higher amount of honey and other sweeteners to balance the increased amount of rum. When using equal parts Honey and Pimento Dram I thought it leaned too far in the Allspice direction, so I turned to a classic ingredient. I decided to use an equal ratio of Pimento Dram and Vanilla Syrup, a combo historically known as “Don’s Spices #2” from the Nui Nui cocktail.

I really liked this, and it definitely reminded me of the great Navy Grogs I had at the Kon-Tiki.  If you like your Navy Grogs thick and heavy, I think you’ll love this recipe.

I was pleased to see the recipe was similar to mine (which perhaps prompted the message),  though it used different rums. I was sworn to secrecy, so I won’t be spilling the beans, but let’s just say that I was humbled by the peek behind the curtain.

So, pictured below is the secret benefactor Navy Grog. And I must say it was pretty damn good. Like, really really good. Anyone would be lucky to get this served to them in a tiki bar that might or might not be near you.

Personally, I liked mine a little bit better, mostly because the rums are handpicked and tuned to my palette. And mine has more honey. Though, since I used a total of five different rums (all mid to top shelf) it wouldn’t be easy to use them in a commercial bar.