Every hero needs a great origin story. And our hero, the mighty Mai Tai, certainly has an origin story that seems to be drawn from fantastic literature. And considering the father of the story was infamous for telling tall tales it’s even harder to fathom.

As the story goes… the year was 1944. Victor Bergeron had been operating a bar at 65th and San Pablo Ave. in Oakland for about ten years, the last several under the moniker “Trader Vic’s.” Since renaming the bar and adopting a Polynesian theme, business improved. But The Trader was always tinkering in the kitchen.

In 1944, after success with several exotic rum drinks, I felt a new drink was needed. I thought about all the really successful drinks; martinis, manhattans, daiquiris …. All basically simple drinks.

I was at the service bar in my Oakland restaurant. I took down a bottle of 17-year old rum. It was J. Wray Nephew from Jamaica; surprisingly golden in color, medium bodied, but with the rich pungent flavor particular to the Jamaican blends.

The flavor of this great rum wasn’t meant to be overpowered with heavy additions of fruit juices and flavorings. I took a fresh lime, added some orange curacao from Holland, a dash of Rock Candy Syrup, and a dollop of French Orgeat, for its subtle almond flavor. A generous amount of shaved ice and vigorous shaking by hand produced the marriage I was after.

I stuck in a branch of fresh mint and gave two of them to Ham and Carrie Guild, friends from Tahiti, who were there that night.

Carrie took one sip and said, “Mai Tai – Roa Ae”. In Tahitian this means “Out of This World – The Best.” Well, that was that. I named the drink “Mai Tai.”

All those little details are there. The precise ingredients. The friends who just happened to be in town visiting from a Polynesian island. The name that expressed itself as “the best.” Well, either Trader Vic found himself in the perfect scenario, or perhaps The Trader was… embellishing. After all, this was the same guy who’d stab forks in his wooden leg saying that he lost it to a shark – when in reality he lost the leg to a childhood disease.

But for now let’s take the story on face value that as Vic often did he was developing a new cocktail using the French almond syrup Orgeat, and decided to pair it with a rich, long aged rum for some special guests. That’s less far-fetched. Trader Vic had a great palette and his riff on a Rum Sour was a delight, and adding the almond-based Orgeat and orange-based Curacao added additional depth to the cocktail. With only five ingredients the Mai Tai is fairly simple in execution.

According to Trader Vic’s lore, this cocktail became an immediate hit and immediately caused supplies of the famed 17-year old rum to evaporate. But the supposed history on this is quite fuzzy.

For one, if this was such an immediate hit why is there no mention of the cocktail in Bergeron’s 1946 Book of Food and Drink? Or in the Bartender’s Guide published the next year? 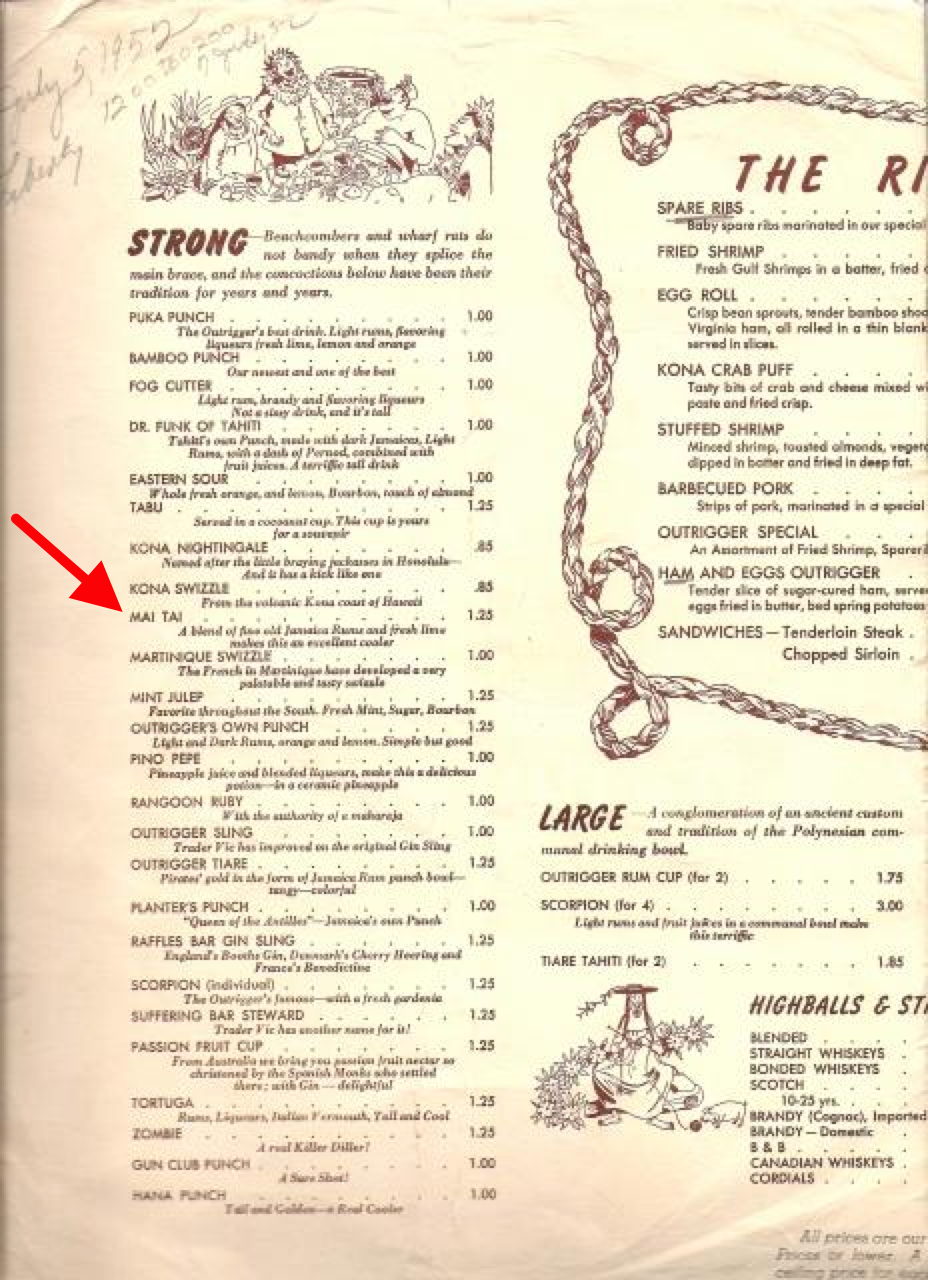 If the Mai Tai was such an instant hit, why was it buried in the middle of the cocktail menu of The Outrigger, a Trader Vic’s spinoff in Seattle, on a menu dated in 1952?

Because that 1944 Mai Tai wasn’t a breakout hit.

But by the dawn of the 1960s, the Mai Tai was being asked for in bars across America. What changed?

Well, in 1953 Bergeron contracted with the Matson Steamship Line to produce a food and cocktail menu for their hotels on Waikiki Beach in the Territory of Hawaii. Those menu items seemed to make an impression on the tourists; and there were plenty of them! Tourism was really gearing up in the early 1950s and was a veritable phenomena by the end of the decade.

Except it wasn’t a 1944 Mai Tai, the version most people would say is a better cocktail. It was a Royal Hawaiian Mai Tai made with the pineapple juice that Hawaii was famous for, and often topped with a dark rum float.

THIS was the drink that became “world famous.”

Soon, every bar in Hawaii was serving their version of a Mai Tai. Because the recipe was not published, each place did it slightly differently. Only rum and pineapple juice remained consistently applied, and in many cases it wasn’t a long-aged and high quality rum; it was the cheap stuff. Orange juice, Amaretto, and Grenadine soon became widely used. The devolution of the Mai Tai began its long, sad slide.

In any case, Donn and Vic buried the hatchet in 1970 when the lawsuit was settled in favor of Trader Vic’s. Guild filed an affidavit attesting to the authenticity of the Mai Tai origin story and Bergeron published the recipe in his revised 1972 Bartender’s Guide. Trader Vic’s got the bragging rights. And that pretty much was that, apart from the old wives tales that continue to this day (“nobody knows who invented the Mai Tai.”) This was settled history fifty years ago, folks.

Now all of this well and good, but even though Trader Vic published the recipe it didn’t mean that you were likely to get a good tasting Mai Tai at most places until recently, and even then it has to be at a quality bar or restaurant. To many, the “Mai Tai” is simply synonymous with “rum, fruit juice, probably dark or red, topped with a cherry.” Easy to drink, but not really a Mai Tai.

The person most responsible for raising awareness of the Mai Tai’s original recipe is Jeff “Beachbum” Berry. Berry was involved in the nascent tiki scene in Los Angeles in the early 1990s, and became the cocktail expert among the crew. He penned the cocktail chapter in Sven Kirsten’s Book of Tiki and wrote about cocktails in Otto Von Stoheim’s Tiki News. And then Berry started producing his own books, starting with the Grog Log in 1998. In this book, as well as in subsequent tomes such as Intoxica!, Sippin’ Safari, and Potions of the Caribbean, Berry provided drink recipes and also stories about the pioneers of tiki cocktails. 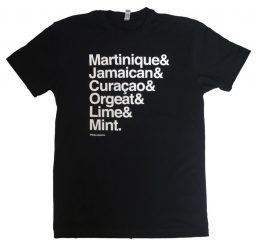 Of course, the Mai Tai recipe that Berry published wasn’t anything new (unlike the Zombie, where Berry literally pieced the recipe together via coded recipes and legwork worthy of any Detective). After all, Bergeron published the recipe in his 1972 Bartender’s Guide. However, by the late 1990s Trader Vic’s was no longer producing the Mai Tai Rum called for in that book. So, Berry went back to the second adjusted formula and published a recipe calling for Jamaican and Martinique rums. Due to the popularity of Berry’s books, bars of all kinds started providing a Mai Tai made to the 1944 recipe formulation, and with the two kinds of rum as the base. This formula was later cleverly employed by Tiki Problems for a t-shirt design.

A few years later, Martin Cate was looking into historical material as part of the research for his 2016 book Smuggler’s Cove: Exotic Cocktails, Rum, and the Cult of Tiki. And Cate noticed that the descriptions in Bergeron’s essay on the history of the Mai Tai sure didn’t describe the Martinique rums he was familiar with. After some sleuthing of his own, he came to the conclusion that the Martinique rum in question wasn’t a Rhum Agricole made from sugar cane juice, but a Rhum Grand Arome made from molasses. This led Cate to consult with Denizen Rum to produce Denizen Merchant’s Reserve, a product containing aged Jamaican rum along with molasses-based rum from Martinique. Due to Cate’s stature and the popularity of the book, Denizen became the defacto single-bottle rum for a Mai Tai in many bars across the world.

Tiki Bars rode the wave of retro-nostalgia culture in the 1990s and had something of a comeback. For the first time in decades, new tiki bars were opening. And a new generation of proprietors began to blend the past with the present. One such neo pioneer was Michael Thanos, an Oakland pizza restaurant owner who got bit by the tiki bug the first time he sipped a Mai Tai at the Emeryville Trader Vic’s. Soon Thanos was converting the upstairs of the restaurant and turning it into a tiki bar; the Conga Lounge was the first new tiki bar to open in Oakland in decades. Thanos shortly thereafter launched a more fully-realized establishment when Forbidden Island Tiki Lounge opened in nearby Alameda in 2006.

Every once in a  while you come into contact with a true believer. Thanos is one of these true believers. He teamed with his brother and business partner Mano Thanos, along with publicist Will “The Thrill” Viharo, to petition the city of Oakland to name the Mai Tai the official cocktail of the city. Though that effort was ultimately unsuccessful, Councilwoman Rebecca Kaplan did push to declare August 30 to be Mai Tai day in Oakland. That’s the date that true believers and tikiphiles choose to make their pilgrimage to Trader Vic’s or at least to the closest tiki bar to raise a Mai Tai in honor of The Trader.

In 2019, the Mai Tai celebrated its 75th anniversary. On a sunny Saturday in late August, Trader Vic’s Emeryville held a special event to celebrate the occasion. Every single square foot of public space was used at the restaurant, including all of the dining rooms, the outdoor patio, and the venerable tiki lounge. Bands and DJs played, arts and craft vendors crammed into corners selling their wares, photo booths allowed guests to capture the moment, and a buffet provided an all-you-can-eat opportunity for hundreds of guests to sample some of the best food that Trader Vic’s offers. And of course there were Mai Tais; eight variants in fact. As the party reached its apex of capacity, Trader Vic’s granddaughter Eve Bergeron called the assembled masses together for a toast. And then she passed the microphone over to Michael Thanos, who like a country preacher brought the assembled crowd to a fevered crescendo by proclaiming “Long live Trader Vic’s! Long live the Mai Tai!“

Bergeron’s original recipe is still the best version of the Mai Tai. But even as recently as the early 2000s it was very difficult to agree on the right lingo when ordering a Mai Tai made to the original recipe’s specifications. Do you call it the “original Mai Tai” or the “Trader Vic’s Mai Tai” or what? Bergeron’s grandson Peter Seely told me in 1998 to ask for the “Old Way Mai Tai” when I wanted one made from scratch and not with the Mai Tai mix that was almost exclusively used in the Trader Vic’s restaurants in those days (and still gets used in many of the Vic’s locations). This Old Way Mai Tai term was used in Trader Vic’s press materials in that same time period. Yet not even ten years later the Old Way Mai Tai was something different. Martin Cate tells the story in Smuggler’s Cove that he was bartending at the Trader Vic’s in San Francisco and was told the “Old Way Mai Tai” was just a regularly prepared Mai Tai with an extra float of 151 proof Rum. Meanwhile, Trader Vic’s called a scratch Mai Tai the “Original Mai Tai” in a 2004 article about the cocktail.

Thankfully, in the last decade quality bars have adopted the moniker “1944 Mai Tai” as the easy way to refer to a cocktail made according to the original recipe, high quality rum, and with freshly mixed ingredients.

No Pineapple juice or orange juice or grenadine or coconut rum or falernum or…, well, you get the picture. Just a Mai Tai made with Lime juice, Orgeat, Curacao, maybe some sugar, and of course rum with plenty of age.