Orgeat (“ore-zha”) is one of the cornerstone ingredients in a Mai Tai, and while it’s not as important as the rum it nonetheless something you’ll need to consider when making your own Mai Tai cocktail. The word is French, which means no two people can pronounce it the same way, and it’s made with almonds, sugar, and either rose water or orange flower water.

Trader Vic himself, Victor Bergeron, was of French-Canadian heritage and likely learned about orgeat as a child. He subsequently used the syrup in a number of cocktails including the Fog Cutter, Easter Sour, Scorpion Bowl. And of course in the original 1944 Mai Tai recipe.

Just a half ounce of orgeat is in a Mai Tai. Is it really that important? Let me tell you a story.

The Bamboo Hut in San Francisco had reopened after about a year, complete with a more craft-inspired cocktail menu. Rather than touristy Island-style Mai Tai that was previously served, the new Mai Tai was made with high-quality rums and liqueur. I saw the bartender put in the Real McCoy and Plantation 3 Star rums. Then the Ferrand Dry Curacao. Then the orgeat and lime. Pretty good right? Wrong! This Mai Tai had a really funny taste. Except I wasn’t laughing.

But I saw the bartender prepare the drink! I saw the high-quality spirits being used. So, it had to either be the lime juice or more likely the orgeat that was wrecking the taste.

Can you make orgeat at home? Of course you can, and there are some great online resources for how to do this. Barfaith’s How to: Homemade Orgeat is a good video tutorial covering the basics.

Some readers have adopted the technique described by Dave Arnold in his book Liquid Intelligence. Arnold’s “Any Nut Orgeat” uses gum arabic and xanthan gum along with a blender to produce an orgeat-style syrup from any nut.

A simplified version that does not require blanching the almonds comes to us from our late friend Alex Fritch, and this orgeat works great in cocktails.

Alternatively, you might try this recipe from our local buddy Tony Dunnigan. This version notably uses different proportions of Orange Blossom Water and then uses Cognac rather than rum as a base for preservation and flavor.

If you’re lazy or trepidatious about cooking your own syrups, like we are, there are a number of good ones that you can get at retail locations. The Latitude 29 Formula Orgeat is our recommended retail brand, a clear and sweet orgeat that is easy to work with and consistently provides the almond flavor we look for in a great orgeat. As you can see below, Latitude 29 Orgeat is the standard by which we compare all other orgeat brands. 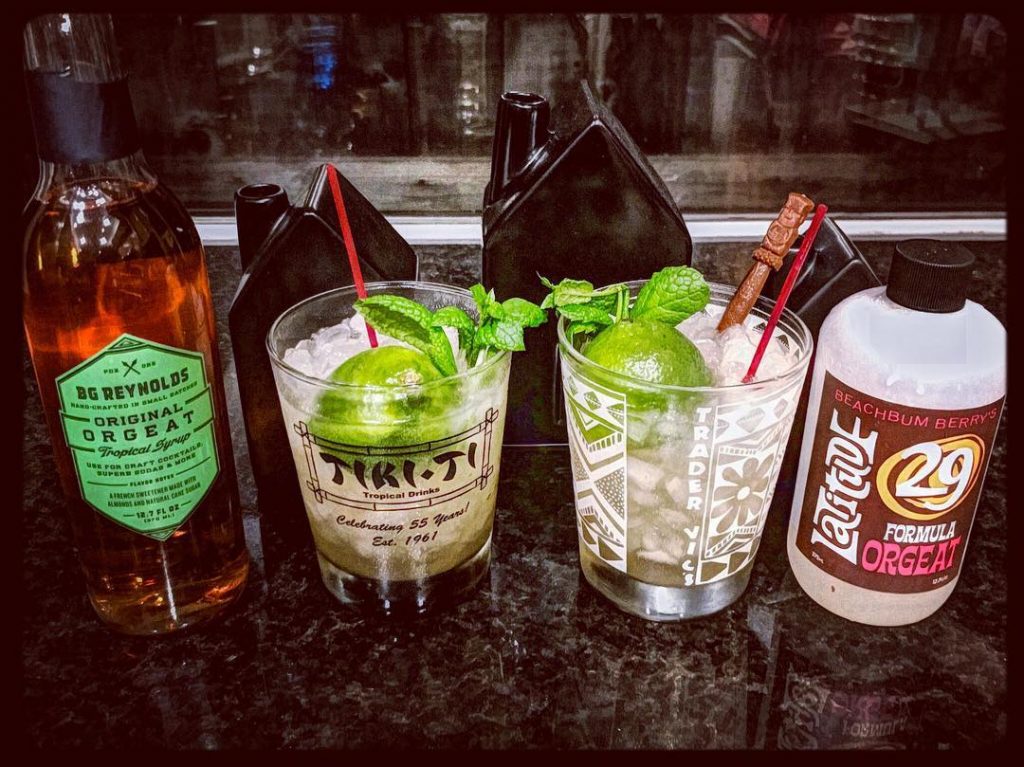 We recommend Latitude 29 Formula Orgeat. This comes with a great pedigree, with Latitude 29 being developed in conjunction with Jeff “Beachbum” Berry, cocktail historian and owner of the Latitude 29 tiki bar in New Orleans.

Latitude 29 Formula Orgeat is produced by OrgeatWorks. It has a sweet almond flavor and the syrup is fairly clear, a good choice for cocktails where clear spirits are used. We have yet to find an instance where this Orgeat overpowers other ingredients in a cocktail.

T’Orgeat from Orgeat Works is also very good. We did a comparison test and found it to be wonderful in a Mai Tai and other cocktails such as the Saturn. Orgeat Works’ Macadamia Nut Syrup wasn’t nearly as flavorful.

Meanwhile, BG Reynolds Orgeat is another strong contender. We’d had occasional issues with content settling but the flavor of BG Reynolds is similar to Latitude 29 in that it is a sweet almond flavor that does not overpower. We’re big fans of the entire line of BG Reynolds syrups and BG Reynolds comes from Blair Reynolds who founded Portland’s Hale Pele tiki bar.

L’Orgeat is an almond liqueur that is positioned as a shelf-stable replacement for Orgeat syrup. Its toasted flavor can enhance the taste of a Mai Tai. Read the review.

There are a number of craft orgeat brands. I tried the Small Hand Foods Orgeat and after a couple different attempts have found it personally lacking. More floral than almond, and requires constant shaking to keep the ingredients mixed. If I’m buying retail, the last thing I want to do is to babysit my bottle of orgeat.

If you love Almond Milk, then Liquid Alchemist is your brand as that the predominant ingredient and flavor. But some will find this flavor unpleasant. Read the review.

Splitting the difference is Liber & Co. Orgeat that is not quite as far in the marzipan direction as Liquid Alchemist, but is a rich syrup that stays settled in the bottle. It adds some nice rich mouthfeel to cocktails. Read the review.

Rum expert Josh Miller tested a number of Orgeat and Orange Curacaos on his Inu A Kena blog and rated the Latitude 29 higher than Small Hand Foods. 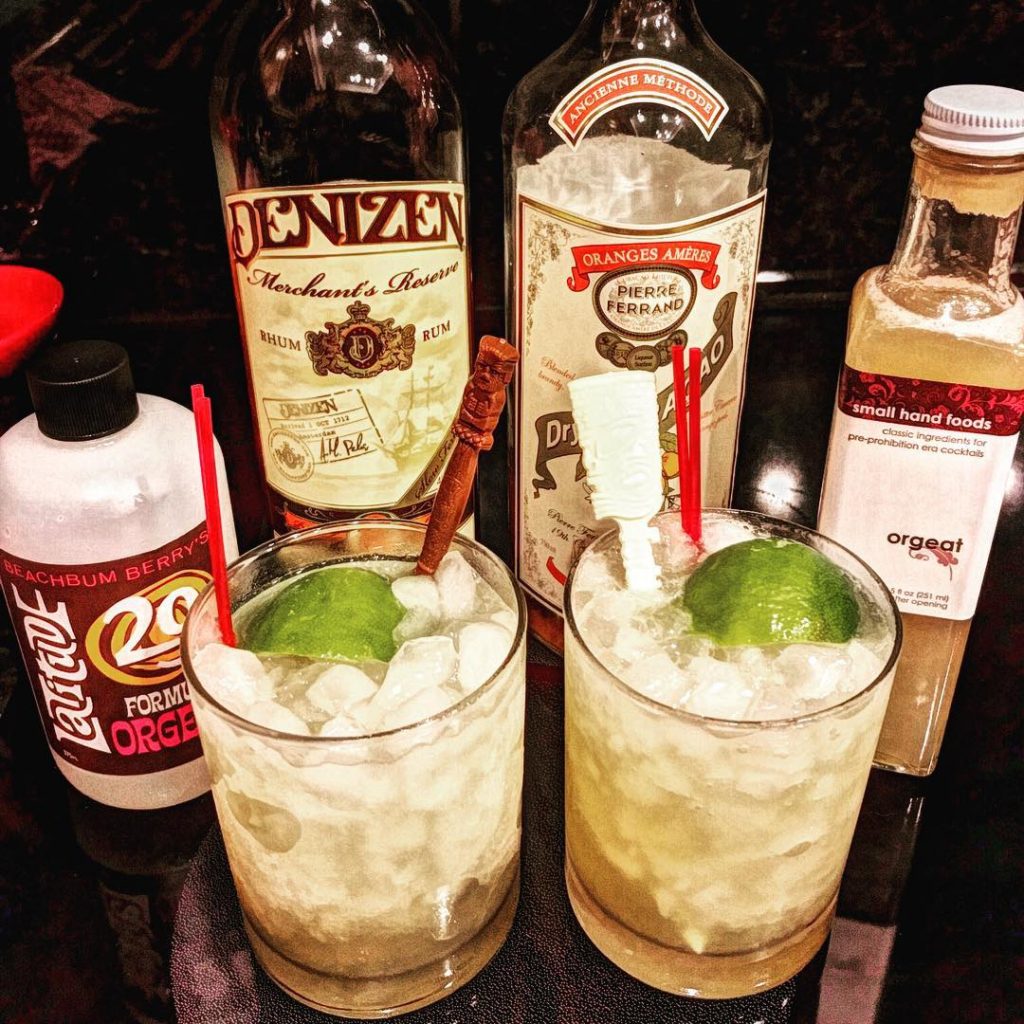 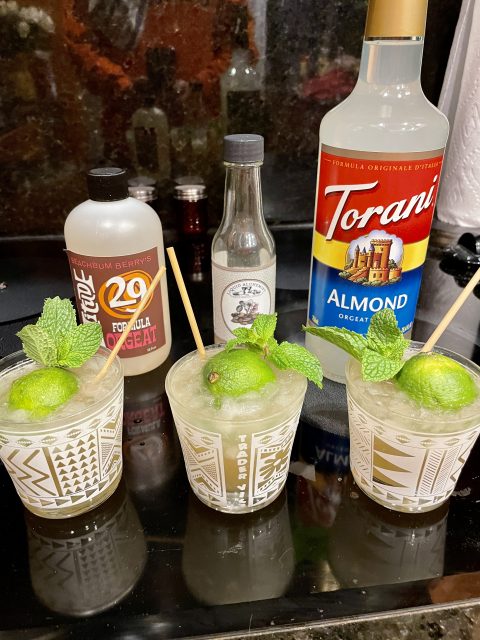 Other Brands Worth Seeking

These haven’t been tested at Ultimate Mai Tai HQ, but we’ve heard good things from people who’s opinions we trust.