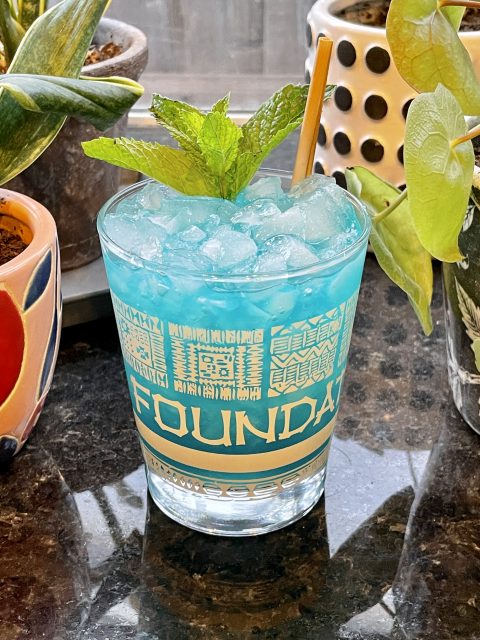 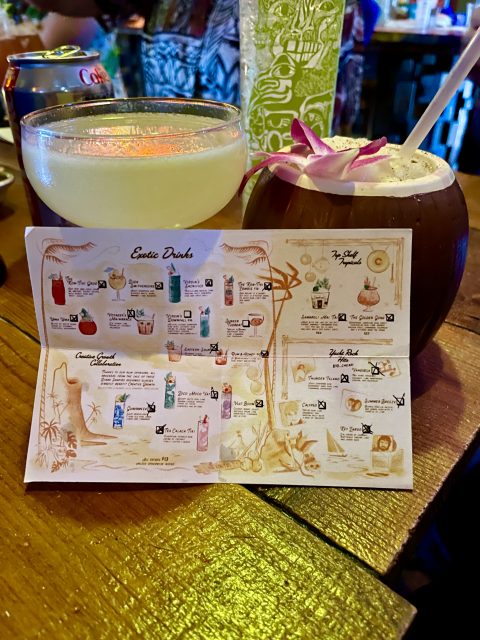 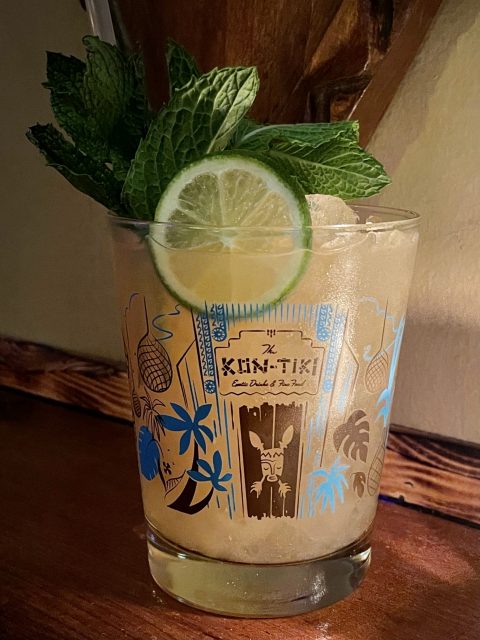 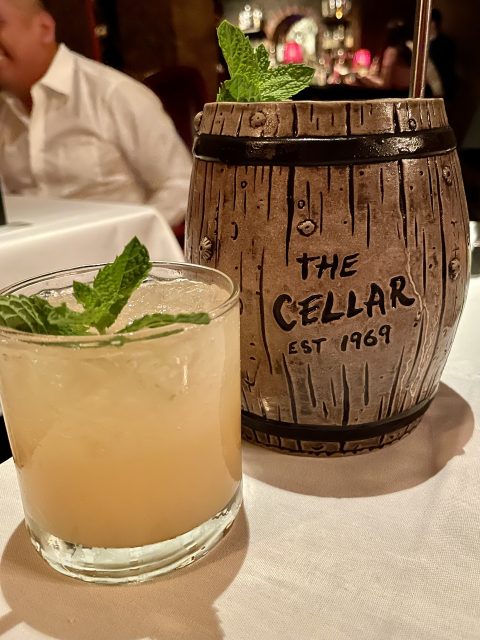 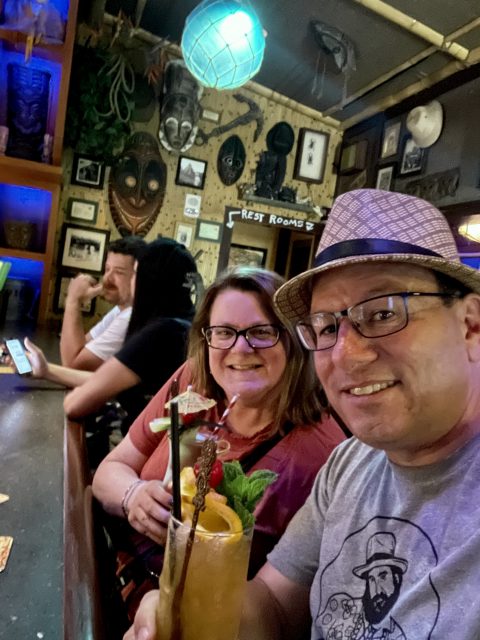 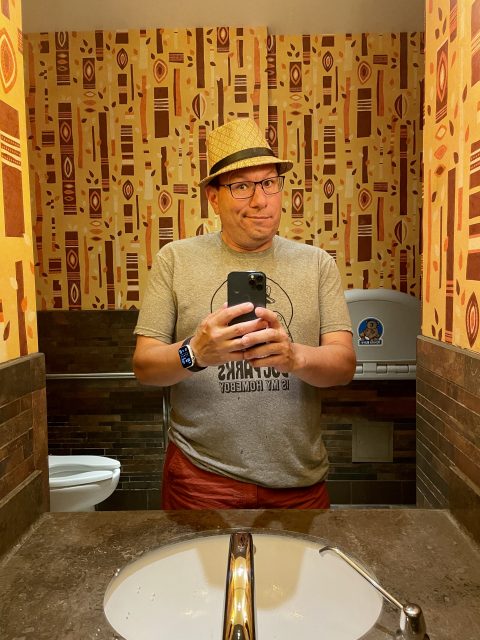 Mrs Mai Tai and we’re supposed to end our road trip in Vegas overnight yesterday but the heat in Phoenix drew us both to the same conclusion that we aren’t used to 115+ degrees – so we went to Southern California instead. 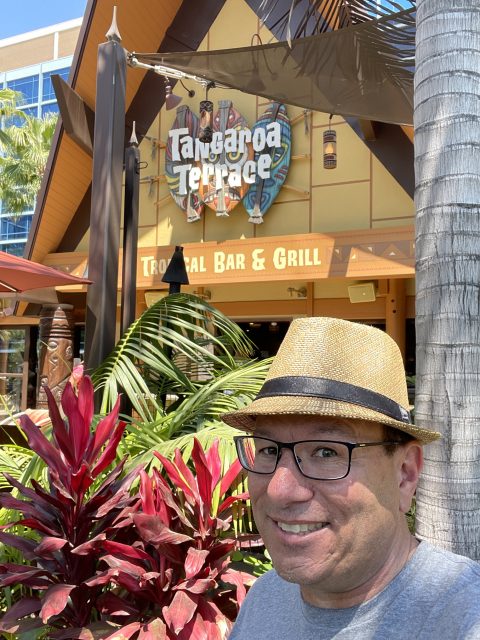 We landed in Anaheim at around 2:30 and thought we’d give the Tangaroa Terrace a shot for lunch. Thankfully there were a few tables largely in the shade so we had lunch and drinks.

My Mai Tai was made with simple syrup rather than the standard agave syrup, per request. This is a big improvement for me, and it was fantastic. Julie had the Tiki Tiki Tiki Tiki Tiki Rum which is her fave there. 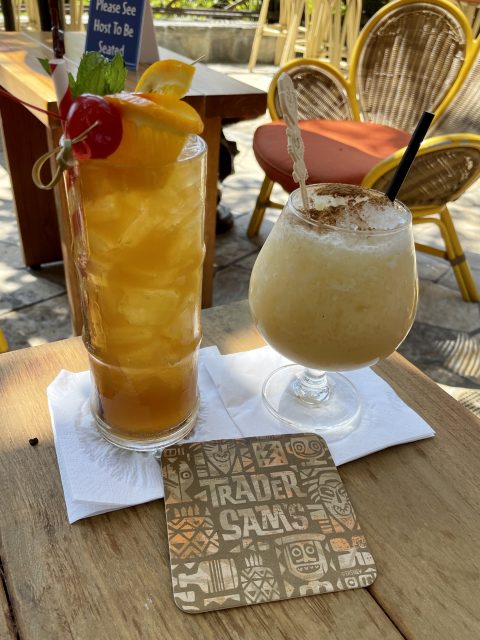 So relaxing out on the patio terrace. It was a beautiful day to be outside.

Had a great time at Undertow in Phoenix last night with our tour guide @thetikiboss. I always say, if you can go with a local, do it. Thanks for coming out and showing us the ropes, Ross. 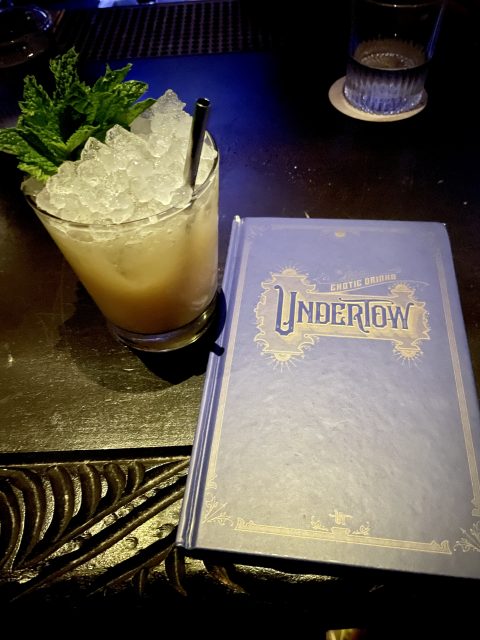 Such an immersive space inside, though we found the sound effects and music to be louder than they could be. But, the decor including some neat special effects really made up for it. Nautical, obviously, but still plenty of tikis.

The cocktails prepared by @ashley.elizabitch and @r_sic were outstanding, as was the service. The Mai Tai was quite excellent with a nutty flavor and balanced set of rums. We loved the other cocktails too.

It is always nice when the hype is met. Certainly was the case at Undertow. 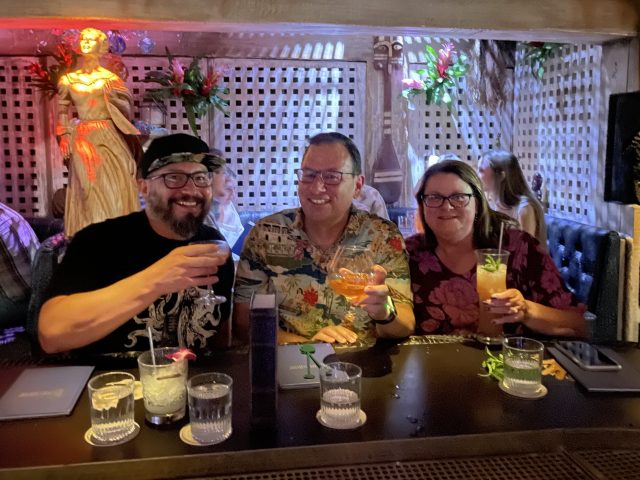 I’m in love and I don’t care who knows!

Mrs Mai Tai and I traveled Route 66 from Oklahoma City to Albuquerque (see: @kevincrossman for photos) and landed just before dinner. We are staying at the @elvadoabq Hotel, a historic Route 66 property recent restored.

We walked over to Old Town but it is hot here. Thankfully we found the Church Street Cafe Mexican restaurant and stopped to cool off.

The Pacifico was great but the Sangria Margarita (frozen!!) was truly amazing. Mrs Mai Tai is already sick of me singing the praises of this amazing cocktail. So tasty and the mix of Sangria and traditional lime Margarita is truly transcendent. 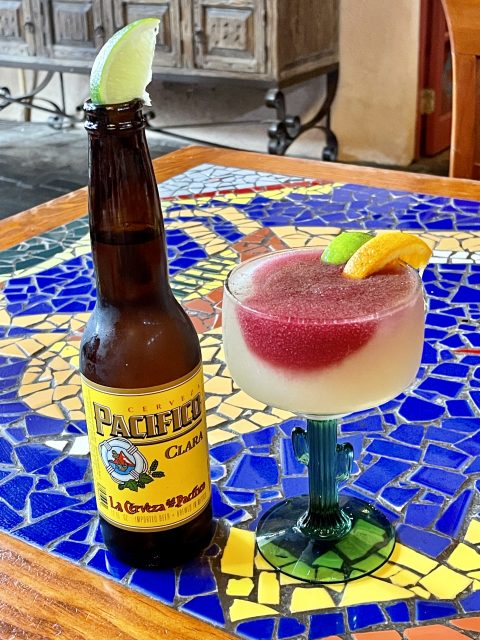 Few tiki bars do both decor and food/drinks excellently, but Max’s South Seas Hideaway is one such example. We loved our dinner, including some Crab Rangoon that were full of cream and crab. So very tasty. I saw sushi on the menu and had some wonderful California Rolls. Meanwhile, Mrs. Mai Tai had the Spicy Salmon Roll that was on special during our visit. We finished with a wonderful Matcha tea cheesecake and chocolate coconut Gelato. Everything was heavenly. 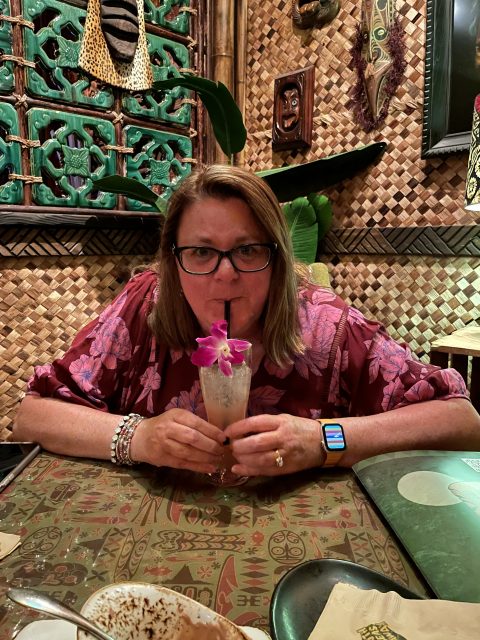 Cocktails were similarly excellent. Mrs. Mai Tai had the blue Juan Ho Royale with Tequila, Marooned with the Movie Star cocktail that featured ginger beer and fresh ginger (Ginger… get it?), and the banana-forward Astrochimp. Julie loved these, and made a new friend with the monkey that came with the Astrochimp. My sampling of these resulted in a similarly impressive conclusion. 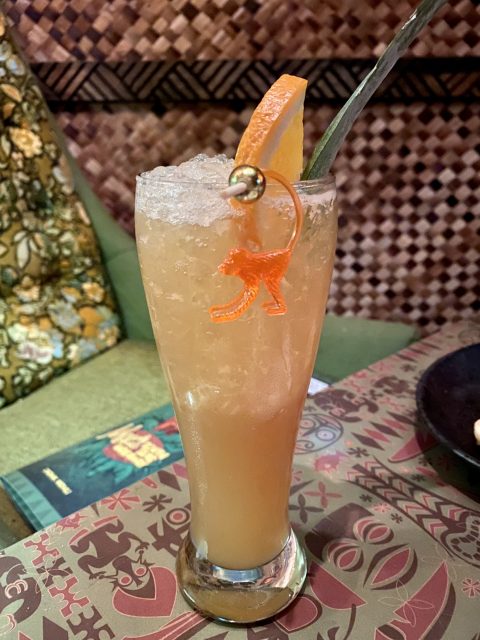 Meanwhile, I found the Pearl Diver to be quite excellent, with a rich taste that I savored. I had the standard issue Mai Tai and found it to be fair, but nothing special. As is often my plan of attack I ordered a second Mai Tai with Appleton 12 and extra Orgeat, and this one was better but still not amazing. Bummer.

Overall, the food and drink offerings at Max’s were outstanding. Prices are commensurate with the quality offered. 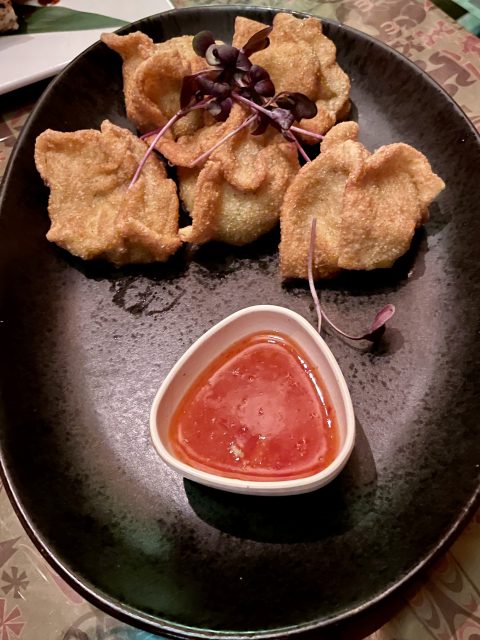 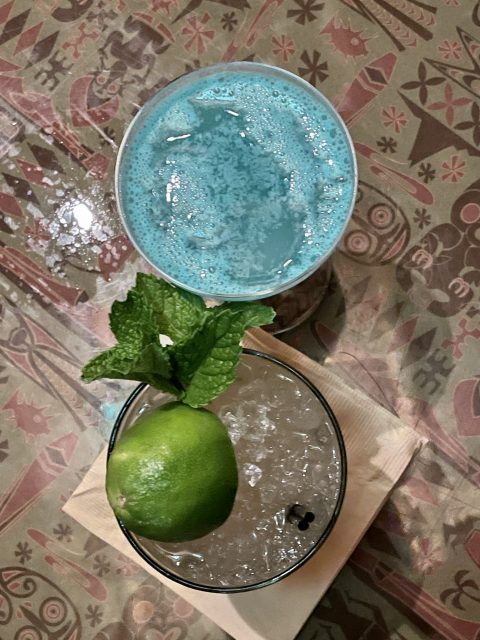 A middle-aged couple walks into a supposed tiki bar.

That’s it, there’s no punchline. We were excited to visit Three Dots and a Dash in downtown Chicago, which was a block from our hotel. We had a pretty good experience there in 2015 when things were slow and we sat at the bar talking to the bartenders. It was a different experience last night, since our reservation was 8:30 on a Friday night.

Lots of thumbing music, louder than I prefer, and the interior has much more red/purple club lighting than our last visit, giving this a total nightclub feel. Everyone seemed to be having a great time, but Mrs. Mai Tai and I were at least two decades older than the average patron. 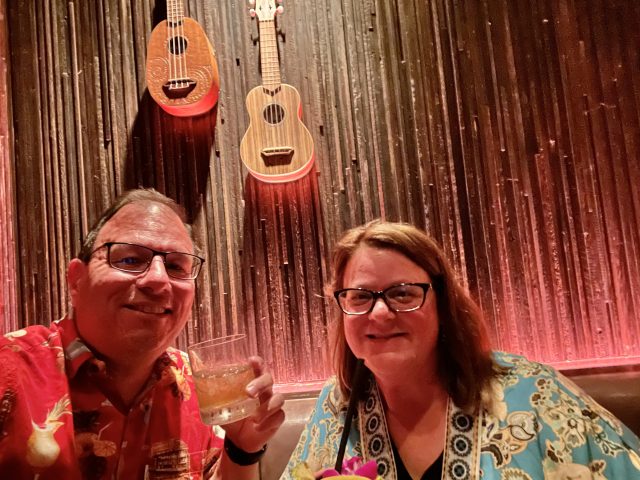 Thankfully, the cocktails at Three Dots and a Dash were pretty good. We sampled five and they were all good to great, and prices were not out of line at all. We notice that all the cocktails had elaborate garnishes, so that each cocktail at a least four separate items as part of the garnish, or a dry ice special effect. Service was very good as well, with the waitress refiling our water and helping us with some mug purchases. 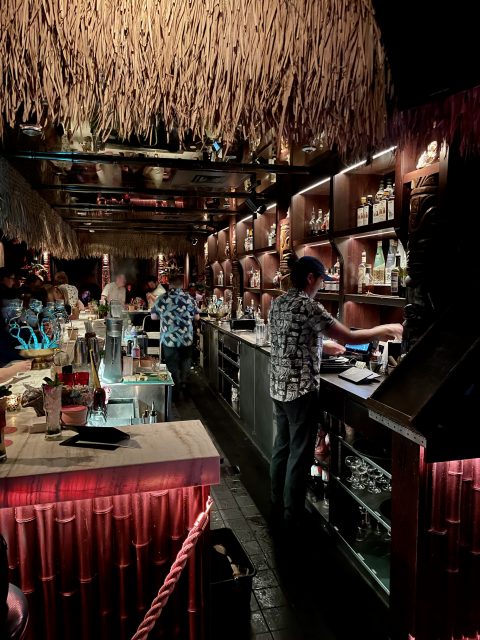 Mai Tai – quite good, with a healthy amount rum from Jamaica, Martinique and Fiji.

Saturn – served in the sea urchin mug, this was well balanced and easy to drink. Not too tart of spicy. 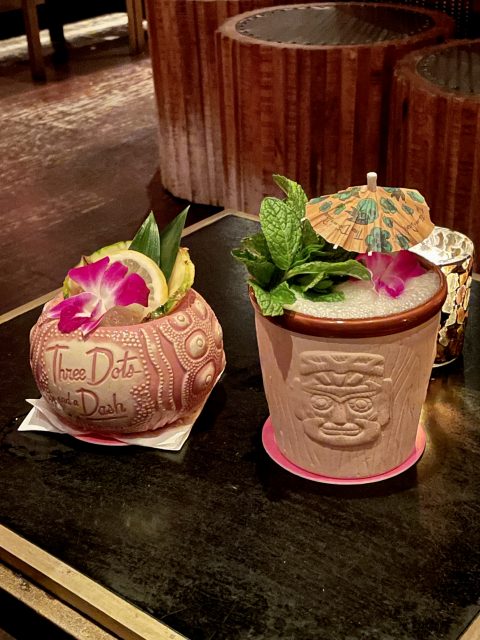 Three Dots and a Dash – just as good as you’d expect given the place is named after this Don the Beachcomber classic. A very nice agricole finish and plenty of juices and spices to savor. We really liked the mug. 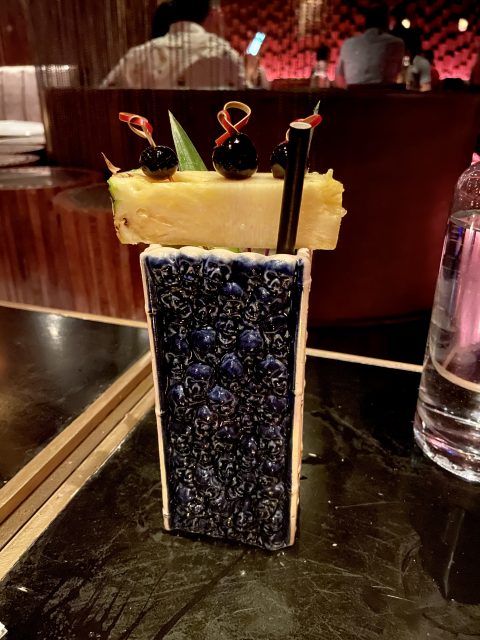 Neptune’s Trident – a Corn ‘n Oil riff featuring Foursquare Sagacity rum, along with Glenlivet 15 year old Scotch, plus some spices. This was just as good as the great spirits should lead you to believe. The Barbados rum and Scotch blended well. 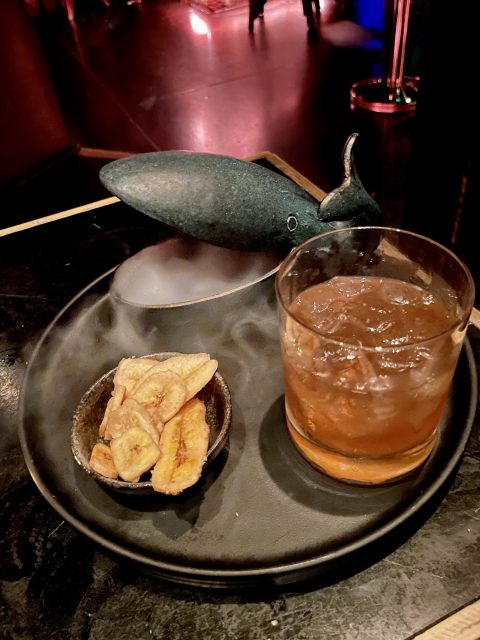 Navy Grog – I went off-menu and ask if they could make one. Sure enough, it came our very well with lots of rum and allspice liqueur. 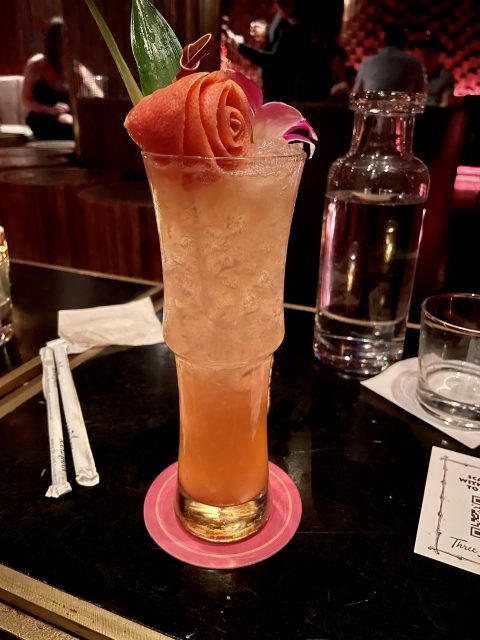 The cocktail menu isn’t large here, perhaps to avoid intimidating the tiki newbies. The Bamboo Room was open for regular seating and not the rum-focused experience that it was originally set up for. But, the very large rum list is right there on the menu, so it is noticeable and a key focus of the venue. There are a large number of tables and booths set up outside as well. As we left there was a really long line to get into the place, so Three Dots seems to be doing great business. 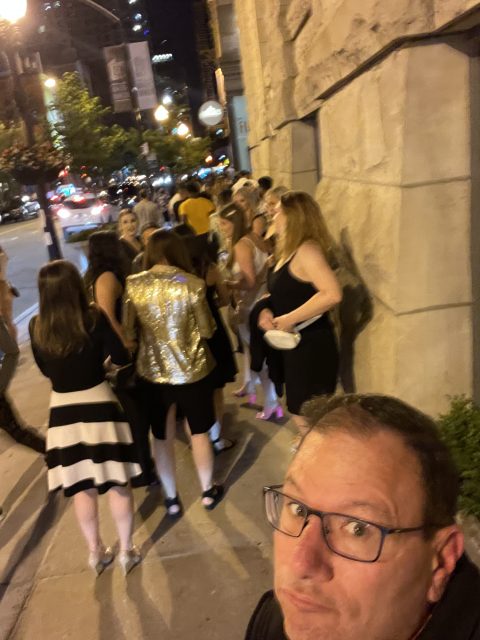 So lucky to have spend MaI Tai Day at Foundation in Milwaukee, one of America’s best tiki bars.

The decor and atmosphere were impeccable. Outside, this looks like any building on the block. Inside, it is an immersive tiki bar that compares favorably to any of the highest quality. Music was classic Hawaiian and very mellow, so perfect for background music while you s your party enjoy conversations and cocktails. I really liked the music here. So many little nooks for conversations, including some cozy booths. Seating at the bar still isn’t available but there is a front room and a back room and their seating areas feel separate and unique.

Foundation’s Mai Tai is fine for $10, featuring El Dorado 5 and Coruba. I followed this with an Appleton 12 Mai Tai “heavier on the Orgeat” and that one was far better and truly wonderful. Such a great way to celebrate Mai Tai day. 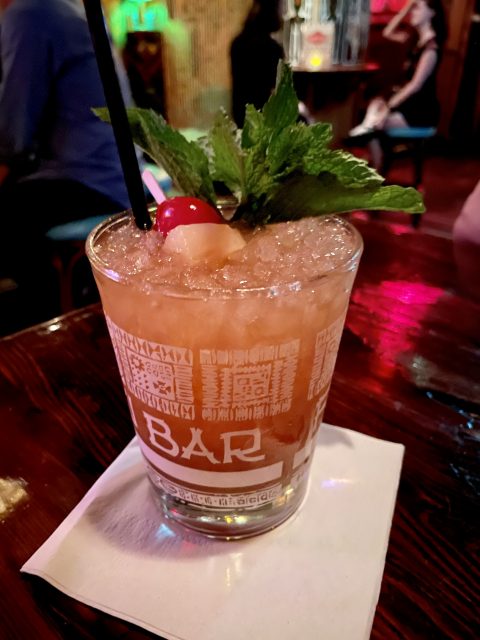 We arrived around 6:30 on Wednesday and the crowd was fairly light. By the time we left at 8:15 the bar was mostly full with a bunch of younger people enjoying the cocktails and company. We even witnessed a first date. Good luck to them! 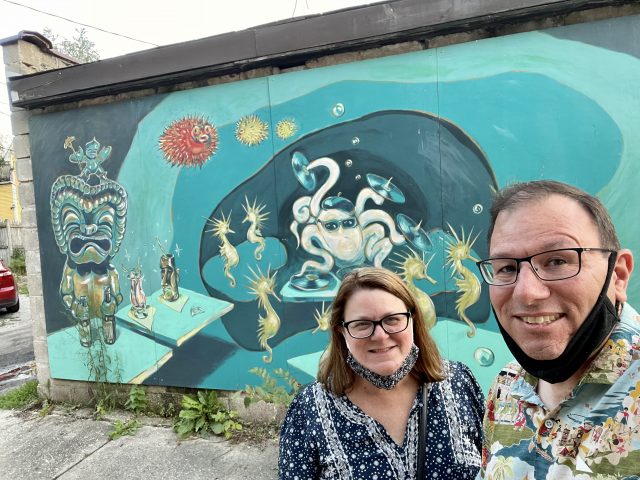