Another piece of the Mai Tai historical puzzle comes to us via the Trader Vic’s in Havana, Cuba, circa 1958. This is the Vic’s location in the Habana Hilton, Latin America’s tallest hotel.

The Habana Hilton opened with five days of festivities March 19-23, 1958. In addition to a Trader Vic’s, the hotel included a casino, supper club, and rooftop bar. Located on the highest point in Havana and visible throughout the city, the hotel was one of the last milestones of U.S. influence in Cuba. In a symbolic move, Fidel Castro used the hotel as his headquarters for several months in starting in January 1959. The hotel thereafter became state-run and is now known as Tryp Habana Libre. 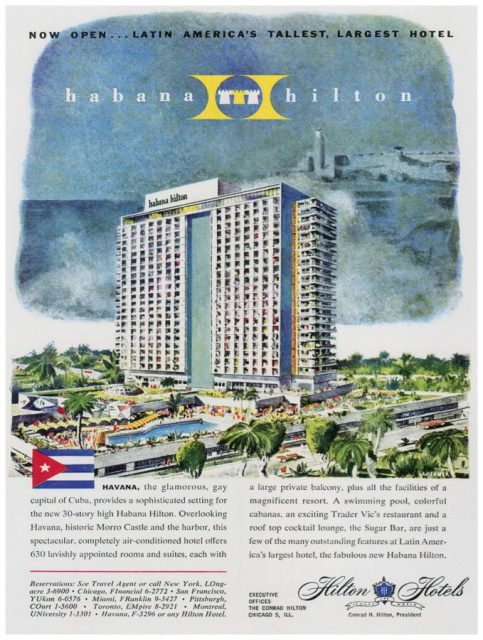 Though there are still the bones of the Trader Vic’s location at the hotel, it is now called El Polinesio. Some of the decor survives, perhaps in better shape than the original Trader Vic’s manager who was shot on his way to the airport trying to catch a flight out of the country. The food and drinks are nothing like Trader Vic’s today.

But back in March of 1958, Havana was gearing up for a celebrity-filled hotel opening that included the Trader Vic’s restaurant. During California Rum Fest 2021, Eve Bergeron shared the recipe rolodex that was used at this location. You can see this dates from the opening week of the hotel: March 17, 1958.

This recipe is noteworthy in that it is an early documented reference to the use of St. James Rum from Martinique, a Rhum Agricole that was significantly different than the Jamaican rums that had been traditionally called for up to that point.

The Jamaican rum called for here is a Trader Vic’s branded rum, aged 15 years. This rum is different than the Myers’s Planters Punch rum that just two years earlier Trader Vic himself described as the rum used in the Mai Tai at the Royal Hawaiian Hotel and at Trader Vic’s locations on the mainland. See: 1956 Mai Tai.

Trader Vic’s recipes often called for the “Juice of One Lime” but that is an inexact measurement.  In the 1974 book  Rum Cookery & Drinkery Trader Vic notes on page 96 that “Juice of one average Lime = 1 ounce.”

The recipe is fairly standard for the era including one ounce of “Mai Tai Mix,” a pre-mixed blend of Orange Curacao and Orgeat. From the same rolodex, the ratio in this mix is 12 parts Curacao to 7 parts Orgeat. The 1 ounce measure is designed for bartender speed and ease, along with the similar portions of rums.

When making this Mai Tai Mix at home, I found the combo of orange and almond to be similar to the circa-2000 retail Mai Tai Mix from Trader Vic’s. That retail product tastes a little different these days, but I can see how having these two ingredients premixed wouldn’t be bad when prepping for a large volume of cocktails.

The Original Recipe and Adjusted Recipe

I made this with Clement VSOP rhum from Martinique and this is a very good Mai Tai, though I personally missed the additional sweetness that comes from the Rock Candy Syrup from the original 1944 Mai Tai recipe. The combo of Jamaican Rum and Martinique Rhum is not uncommon these days, and many prefer this combination of spirits.

I’m not aware of an earlier reference to the use of St. James or another confirmed Rhum Agricole in a Mai Tai at Trader Vic’s. This version is a precursor to the Mai Tai recipe featuring equal parts Jamaican and Martinique rums that first appeared in print in the Trader Vic’s Bartender’s Guide Revised (1972). In that book the specific style of Martinique rum is not specified, though the recipe for the Mai Tai-like Suffering Bastard does specially call for Rhum St. James. Because the specific type of “Martinique rum” is not specified here or in the earlier “Second Adjusted Formula“, some have suggested that a molasses-based Rhum Industriel was used rather than a grassy Agricole style.

It is difficult to say how long the Havana Trader Vic’s used this recipe, since presumably many records were lost during the Cuban Revolution. In his book Smuggler’s Cove, author Martin Cate says that Trader Vic would often boast about using St. James but would have been too cheap to have used the expensive rum in his most popular cocktail. Perhaps the use of St. James at the Havana Trader Vic’s was only for the opening celebration attended by hotel owner Conrad Hilton and Hollywood Celebrities.