Stephen Hill and Jason Antoon appeared on Entertainment Tonight to promote their CBS shows set in Hawai’i and to make some Mai Tais at the Royal Hawaiian Hotel. As these segments go, this one ain’t bad. They credit “Mr. Bergeron” with the origin of the Mai Tai and the ingredients in this version are actually a little better than recipe the Royal Hawaiian has on their website. 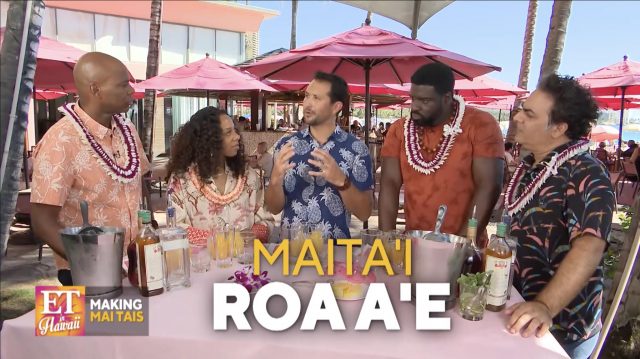 We always talk about the need to measure ingredients for cocktails, but I’m more than willing to give a pass to the “free pour” for the Jamaican rum float here. If people go a little heavy that would only improve the cocktail. They didn’t name check local favorite KoHana rum but as a light rum that one is quite flavorful, so a great option for an Island Mai Tai. The Mai Tai Bar at the Royal Hawaiian is a great place to relax in Waikiki.

I have been enjoying Magnum P.I. since its debut in 2018, and they even incorporated Hawaii’s oldest tiki bar La Mariana into the program a couple years ago (they filmed at La Mariana to introduce the venue, but since then all scenes are filmed on a set). NCIS: Hawai’i debuted earlier this year.