Since this post was original written in 2020, we’ve done some extensive research into the Royal Hawaiian Mai Tai, and much of what we wrote below is incorrect or at least not fully contextual. So, we urge you to read the article to fully understand how the cocktail evolved, or some might say devolved.

The (De)Evolution of the Hawaiian Mai Tai 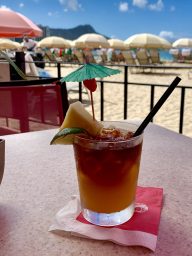