The 25th tiki bar I’ve visited this year is the Kona Club in Oakland.

Which is to say that The Kona Club remains a curious example of Bay Area Tiki since it eschews the craft cocktail sensibilities of the most well-known tiki bars in the region. Kona Club’s interior decor is a gorgeous bamboo explosion and so nicely laid out (except for a few tiki tacky elements), including a large second room and a pool table room. The Hula Girl remains a central focus, though not animated while decked out for Halloween. 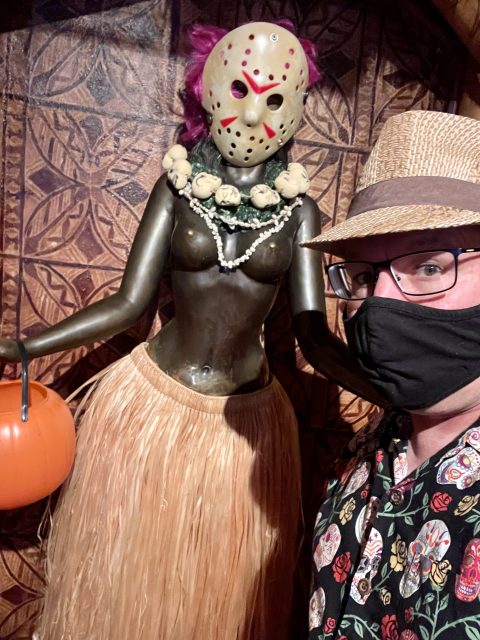 They were training a new bartender and while she seemed earnest and attentive, the lead bartender was less so. I entered shortly after opening along with two other groups. As the first round was almost all delivered I asked the bartender a bar-related question and he gave me an answer that said “I don’t want to talk to you.” It was not busy (again, only three parties, most of which already had their drinks) so I don’t know why he was so short with me. Maybe because I wasn’t a regular. Maybe the Aloha shirt I was wearing branded me a snob. I mean, sorry for wearing an Aloha shirt in a tiki bar and taking an interest in your business.

There’s no reason a neighborhood / dive bar can’t adjust to be “more tiki” in this writer’s opinion (Bamboo Hut and Tiki Tom’s have transitioned to this approach in recent years). It takes less time to make a measured 1944 Mai Tai than the Mac Nut Chi-Chi the Kona Club is famous for. If the place was always busy I could maybe get behind “count pours” rather than measured pours, but as it stands I’m perplexed why there isn’t even an attempt to do better.