The new cocktail menu at Trader Vic’s Emeryville leans heavily on Trader Vic’s favorites, including “the Original Mai Tai” which is a Mai Tai made from scratch and not from their Mai Tai Concentrate mix. But there are a few new cocktails that were developed with Vic’s alum Brent Harris. I was able to sample three of this on a recent visit.

Vic’s Itch
This is a Tropical Itch riff that includes Dark and 151 rums, bourbon, passion fruit, fresh lemon, and fassionola. This was quite tasty and most definitely boozy. 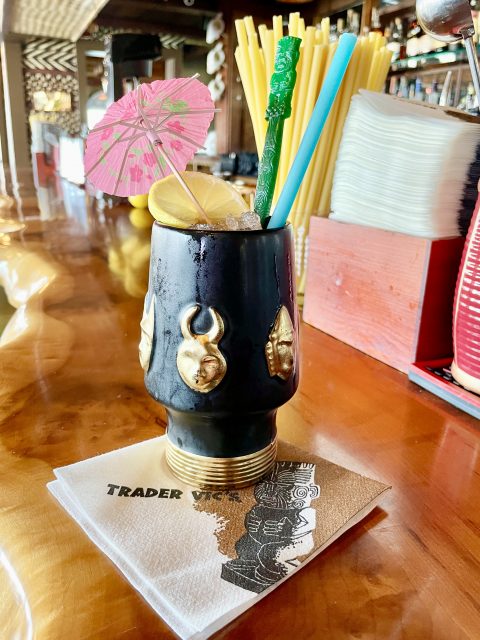 Vic & Dotty
Supposedly a There Dots and a Dash riff, though without Rhum Agricole in my opinion it has strayed pretty far off. Contains Royal Amber and Appleton rums, falernum, grog mix, citrus, and honey. Very flavorful and totally felt like a classic Trader Vic’s cocktail, including orange and lemon. So it fits in nicely alongside favorites such as the Eastern Sour or Fogcutter. 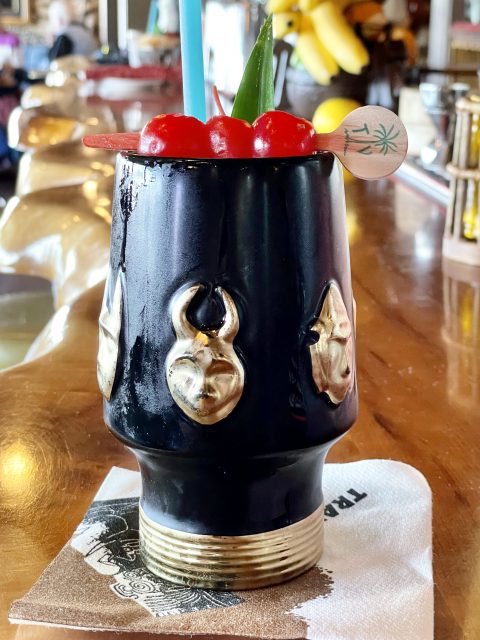 Trader Vic’s Painkiller – not pictured
Features dark and gold rums, orange and pineapple, and Vic’s “coco-nutty house made Mandalay mix” with a dash of cream. Painkiller fans will feel right at home, but there’s definitely something different here – and I like it. Just a bit more complex than your typical Painkiller. Curious if our friends in Emeryville are playing with fire legally, though.

I wasn’t able to sample the other new cocktails:

For lunch I had all-time favorites Crab Rangoon and the Trader Vic’s Salad. It was nice to see the restaurant pretty full, too.