We skipped brunch but it is always fun to check out the vendors at the Hawaiian Bazaar at Trader Vic’s Emeryville, one of the few tiki marketplace events that take place in Northern California.

We caught up with some local favorites who we’ve purchased from before, including Woody Miller, B-Rex, Sweet Siren Designs, and Tiki Lounge Lights. All had some great stuff, though we were most impressed by the Greg’s amazingly cool peacock chair lamps.

There were some new vendors at this event. Rob and Jeanine Allspaw brought their Mischief Motu carvings up from Southern California for the first time that I can remember, and we scored a few items for our bedroom walls. Oakland artist Kelly Jo Mullaney had some interesting shirts and paintings – and many of the designs have hidden elements. Tiki Makaio was showing off some wood coasters and bottle openers that have vintage designs – and he does custom work too. Check them out. 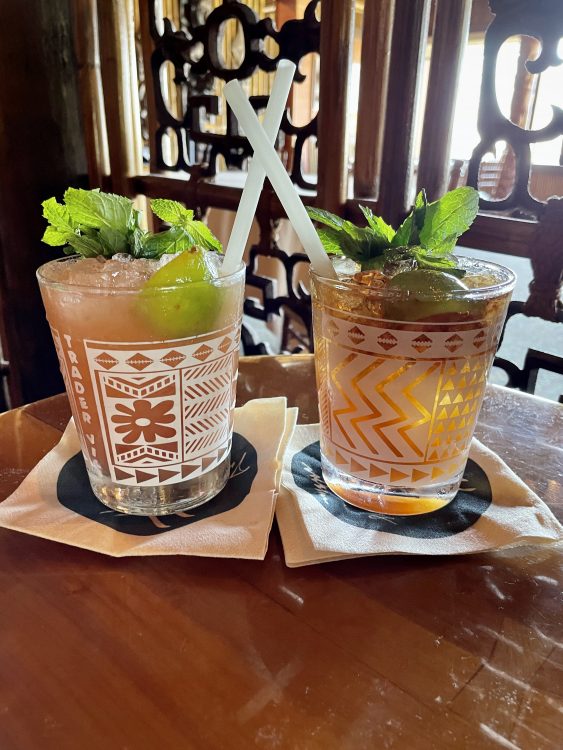 Can’t go to Vic’s and skip a Mai Tai. Mrs. Mai Tai had been meaning to try the Guava Tai, a sweet variant that for sure you’re not going to miss the guava in. I went my favorite, the San Francisco Mai Tai – the standard Mai Tai with 151 float.

Nice to catch up with some folks out on the back patio and in the marketplace. It was a beautiful sunny day in Emeryville.

People often ask where they can get the best Mai Tai. So, we’ve recently updated and expanded the list of the best ones to a total of ten. These are my top Mai Tais made without any rum or ingredient substitutions, current as of July 2022, and they’re all great Mai Tais that anyone should enjoy.

Note that for purposes of the “rating” on this list, it only about what’s in the glass and not about the rest of the bar visit experience. Not that any on this last have poor ambiance or service, mind you. 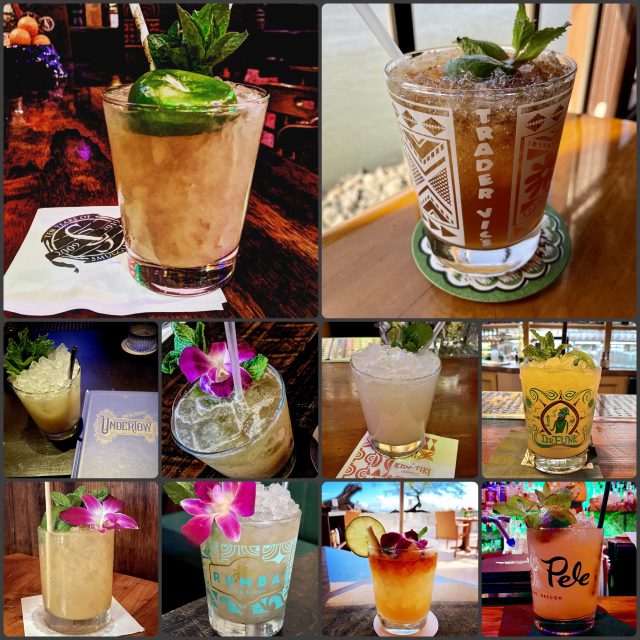 Here is the alphabetical list of the top 10 Mai Tais that you can have right now.

The list is ever-evolving. We had a close call in Seattle where Rumba is transitioning their Orgeat and we caught the bartender incorrectly using the previous ratios. And we hear that The Kon-Tiki in Oakland and Dr. Funk in San Jose are working on revised menus. So, we’ll have to see how that affects this list.

This list obviously skews to the United States. I’m willing to try anyone’s Mai Tai if a plane ticket and hotel is included in the invite.

Additional details, photos, and recommendations for these Mai Tais

Petco Park is a dream for fans of local favorites Cutwater Spirits and the myriad craft beer breweries. Cutwater is everywhere, with a common menu of cocktails throughout the stadium and their ubiquitous canned cocktails. Since neither is my favorite, I was pleased to see an unexpected option with a Mai Tai at one of the  cocktails bars that had a unique menu. Even better was the presence of Orgeat and Orange Curacao on the back bar.

If you’re so inclined, you can get this served in a tall plastic bat, but we went old school for a SD cup. And this Mai Tai wasn’t bad at all. There’s a little splash of pineapple juice, and so when I returned for our second game of the weekend I ordered it sans-pineapple and it was even a little better. Since this uses Cutwater’s light rum, don’t expect too much rum flavor, but for a ballpark you could do much worse.

Neverland is a pop-up experience at venues in cities worldwide. We attended the San Francisco location which is running through early August. The bar is set up with a Peter Pan theme, and features scripted and improvised encounters with Peter Pan, Captain Hook, and the crew. The audience plays lost boys who work with Peter Pan to rescue Tinkerbell from Captain Hook. Those who aren’t into live-action role playing need not worry – this aspect is somewhat minimal and you aren’t expected to be “in character” for your entire 90 minute experience. 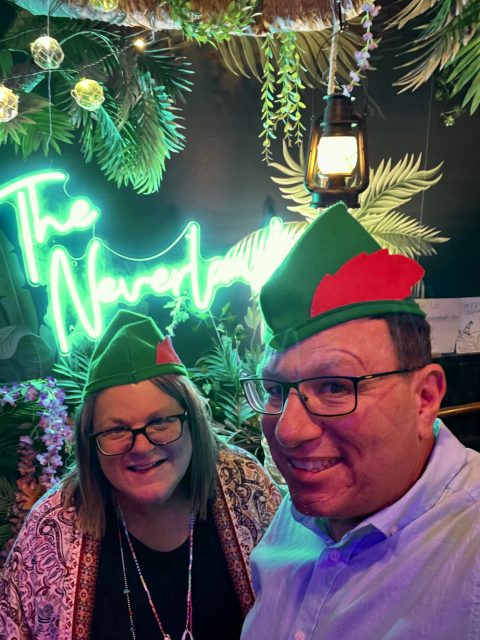 The adults-only experience includes a few saucy jokes and plenty of alcoholic beverages. Upon entry, everyone is provided with a little glass of beer or wine. After some interactions with Peter Pan and Captain Hook, you’re given the ability to explore the space and take part with some physical activities to win doubloons that get you a barrel of Painkiller-style rum punch. The final cocktail is built using a base that’s poured into a coupe and then completed by combining it with some citrus in a bottle you find hidden in the space. Cocktails are okay given the venue/price.

Additional cocktails and beverages are available for additional purchase, including a smoking fishbowl and some shots. But you’ll get plenty already we think most guests will stick to the included offerings. In SF, this was $45 per person which included the three drinks. There’s a tip jar and Venmo codes for tips. 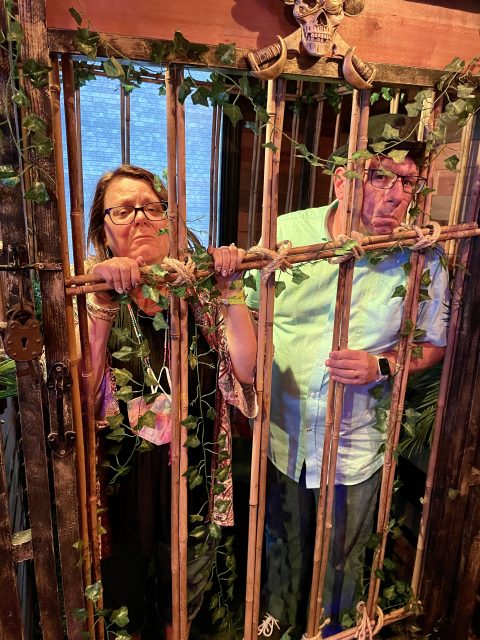 There’s plenty of time for photos and encounters your crew members, and the space looks great including a jail cell, lighting, and props. This is a lot of fun with a group of people.

End of the week deserves a manly Mai Tai made with @woodsnavyrum in tribute to our friends @neilsmith1971@carlasmith1973 from England. We braved Covid on the Sunday Bar Tour with them at @tikikon #busDisthebestbus 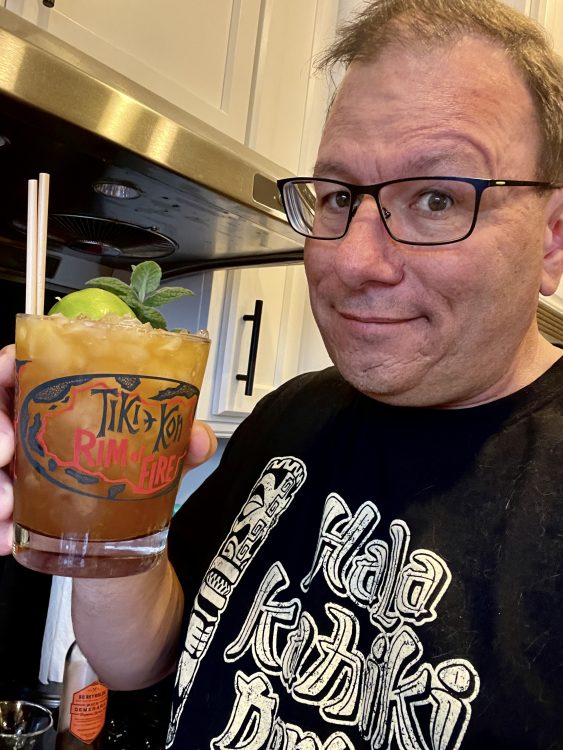 Thank you for the shirt. The @hala_kahiki_derby design looks great! Cheers!

The Mai Tai with Wood’s is amazing. Such a bold and flavorful dark Demerara rum, with plenty of burnt caramel overtones. Another friend from England muled that over for me a couple years ago and I keep it for special occasions. 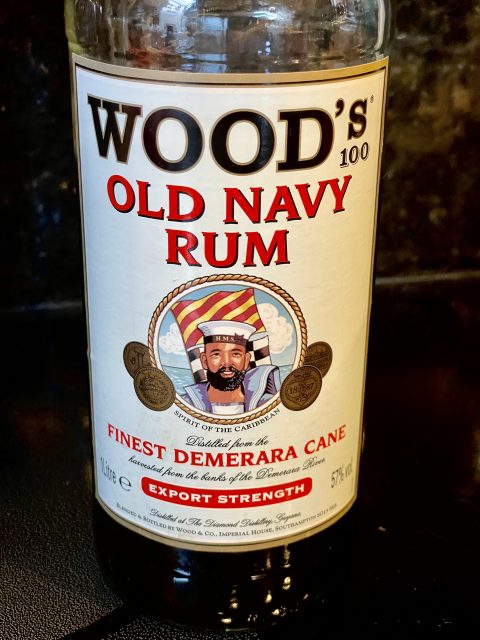 Back in 2017, we were so pleased to see a tiki bar called the Cat Eye Club just steps from Petco Park. It wasn’t an amazing tiki bar per se, but the clientele seemed free of the jocks and frat bros that crush all the other nearby establishments on game day. Food was from the adjacent restaurant The Blind Burro.

Sadly, all that remains of the Cat Eye Club is the “Tiki” neon sign that now says “Tacos”. It’s now simply part of the restaurant. 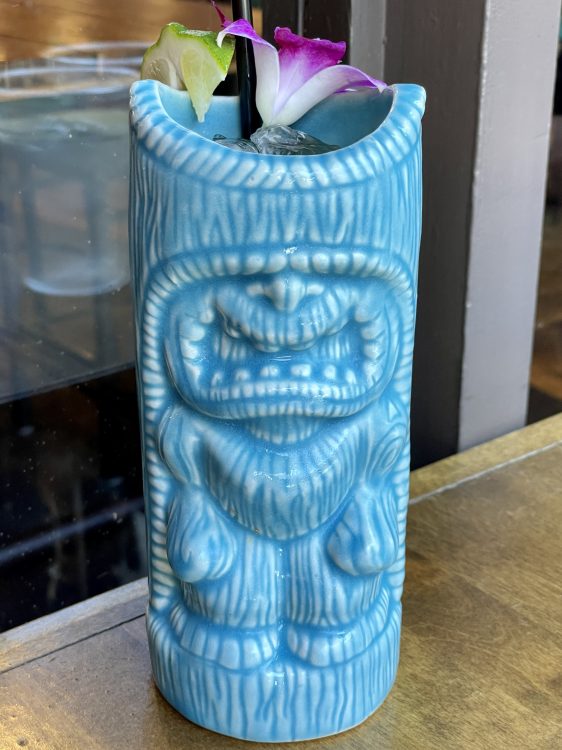 Our pregame lunch at the Blind Burro was pretty good nonetheless including some tasty Mexican food and Margaritas from their expansive menu. Mrs Mai Tai liked the Guava Margarita. I loved my Chipotle Chicken Torta.

There is a Mai Tai on the menu that includes “white rum” and a float of Real McCoy 5 yr rum. I ordered this without the pineapple juice that it normally comes with and it was a competent Mai Tai and comes nicely served in a Real McCoy tiki mug. 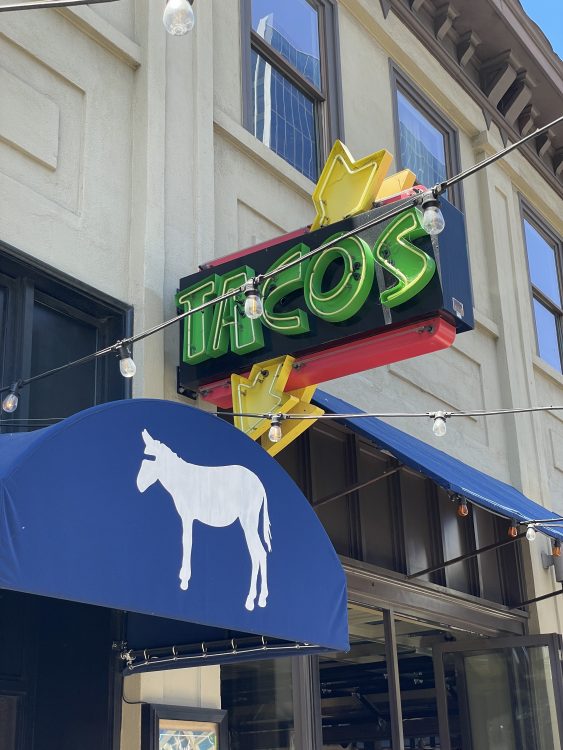 After lunch at Bali Hai we wandered over to take a look at Humphreys Half Moon Inn, a Shelter Island classic.

So pleased to see that the majestic A-frame is now back greeting hotel and concert guests to the venue. The previous one went down in a vehicle accident. 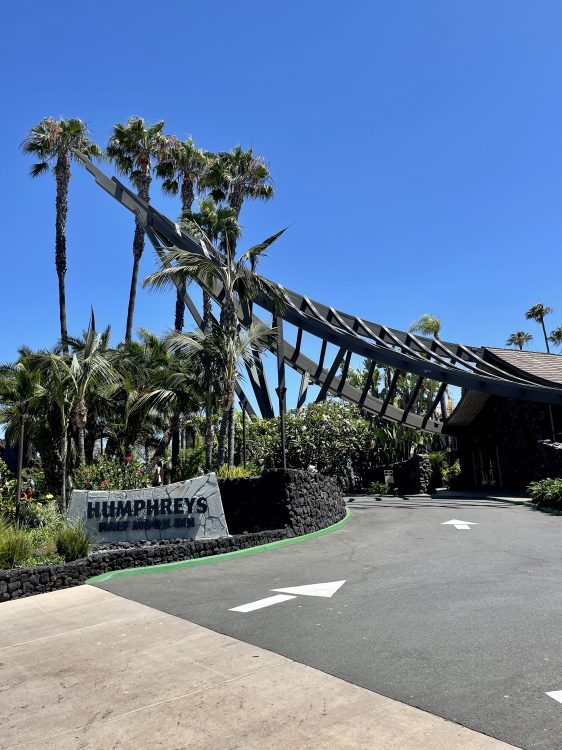 The grounds here still look great and wandering around the gardens and pools is truly relaxing. We saw parrots, koi, turtles, ducklings, and a few tikis. We also saw them setting up for the America concert and even got a new nods for the SF Giants gear we were wearing from the roadies.

We also saw that the Humphreys Restaurant is open again, featuring its own majestic A-Frame entrance. We enjoyed our stay at the Half Moon Inn last year and would come back if we aren’t in town mostly to be by the stadium like this time.

We skipped False Idol last year since we weren’t doing much indoor bar crawling, but we were sure to make it this trip by making a reservation. Having visited Smuggler’s Cove and Hale Pele in the last ten days this completed the trio of Martin Cate’s bars on the west coast.

You enter False Idol via the host stand inside Craft & Commerce. With reservations you’re seated at a table and get to avoid the crush of patrons in standing room or trying to get to the bar seating that is first come, first seated. The reservation for four at 8 pm on a Friday was for two and half hours and we used nearly every minute. Our server Jordan did a great job checking in with drink orders and such, and since we were seated by the exit door we also saw him play bouncer when people tried to sneak in.

The decor here is so cool, with a ceiling filled with floats and carvings on the fall walls from local legend Bosko. Thunder roars when flaming bowl drinks are served. This was our first time seeing the new entrance, replacing the old speakeasy style freezer entrance with one framed by scary shrunken heads and skulls.

The cocktail menu is vast, offering both a classic tropical cocktail as well as a modern riff.  I thought the Mai Tai was just fine, and the Mai Sho Roa Na riff was a great excursion for a version using Banana rather than Orange liqueur and then adding Madiera. Our group tried some of the other cocktails including the Polynesian Forty-Niner (using Gardenia mix), Coronado Luau Special, Mac Nut Chi Chi, and Ube Bae. Really great cocktails overall at False Idol.

I attempted to not over-indulge by only having two drinks. But the group was really interested in ending the night with a flaming bowl drink, so we settled on the Alkala the Fierce, featuring Dons Spices #2, Orgeat, rum, and Chai-infused Bourbon. I really liked this cocktail, and Jordon flamed it up real good for us. Though, afterwards there was a clear cloud of cinnamon that settled on the table.

On our free day between Giants/Padres games this weekend we visited Old Town in the morning for some shopping and cultural activities. Then we went to Shelter Island’s Bali Hai for a late lunch.

Seating is solely indoors now, and we were seated by one of the myriad water-facing windows. The windows are so clear that we weren’t sure there were actually windows present! Kudos to whoever cleans these.

We had evening plans at False Idol so we went modest for the drinks at lunch. Which means there was no way I was ordering Bali Hai’s infamous Mai Tai with 5 oz of rum! I decided on a pour of the El Dorado Port Mourant Rum special release. The current version of Mr Bali Hai cocktail was a hit by those at our table.

Food and service were right up there with the high standards we expect at Bali Hai and it was so relaxing to have lunch on a clear day with the views of San Diego Bay. 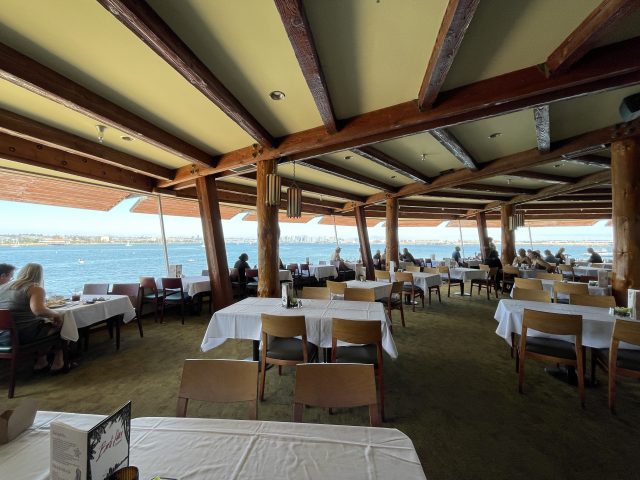 Wanted to thank you to Ray for driving us from Portland to Seattle and then meeting up with us on Tuesday for a night to remember (at least for the portions that we can actually remember). Such a pleasure to catch up and also to hear about what’s happening in the Seattle area and to give us some suggestions for things to do and such. 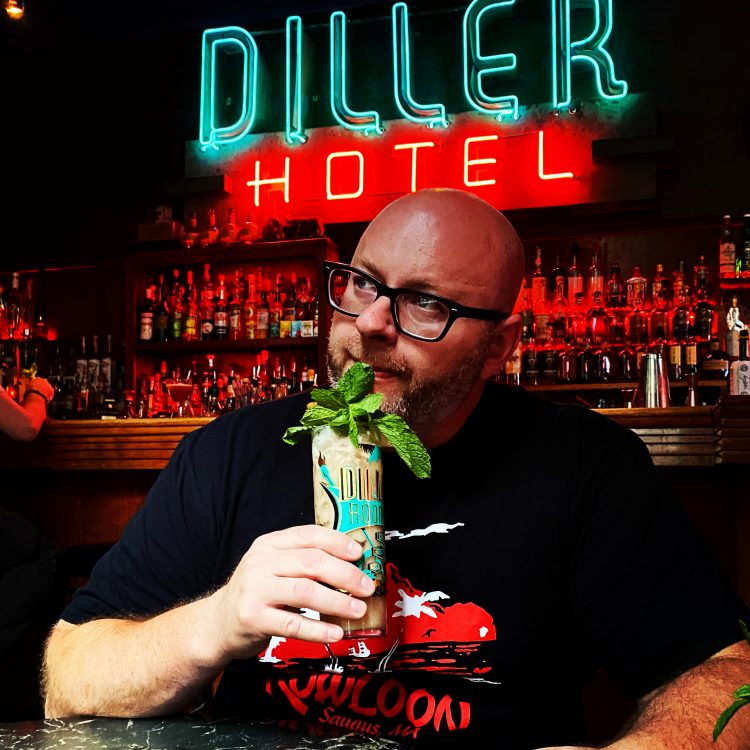 Without Ray, we probably wouldn’t have inquired about the orgeat-heavy Mai Tais at Rumba, nor would we have checked out the Tiki Tuesday at The Diller Room. He opened some doors and did some introductions for us at Tiki Kon, too.

Cheers to you, Ray Wyland.

Be sure to visit Ray’s blog and YouTube channel: 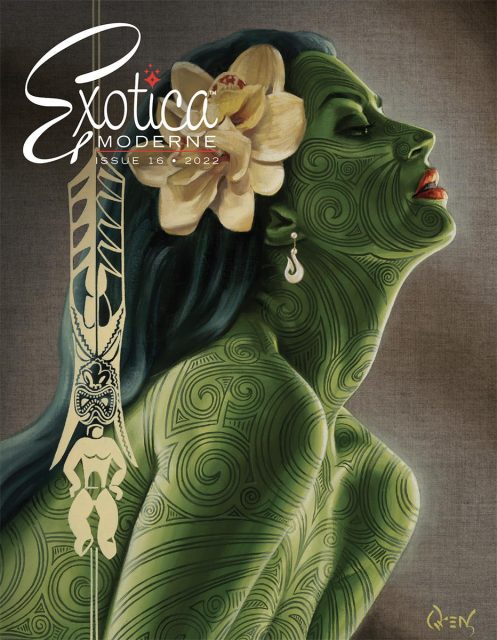