The term is intended to help consumers understand that these rums are made from sugar cane juice, not molasses, and so have a different taste from most rums in the marketplace. Though, “agricole” is very much a loaded and controversial term since many people feel it should only apply to AOC Rhum Agricole made in French islands such as Martinique and Guadeloupe. The Hawaiian distillers I do believe respect where those producers are coming from and do attempt to forge a middle-ground by using the term “Hawaiian Rum Agricole”, though the “rum not rhum” distinction seems like the smallest of differences. 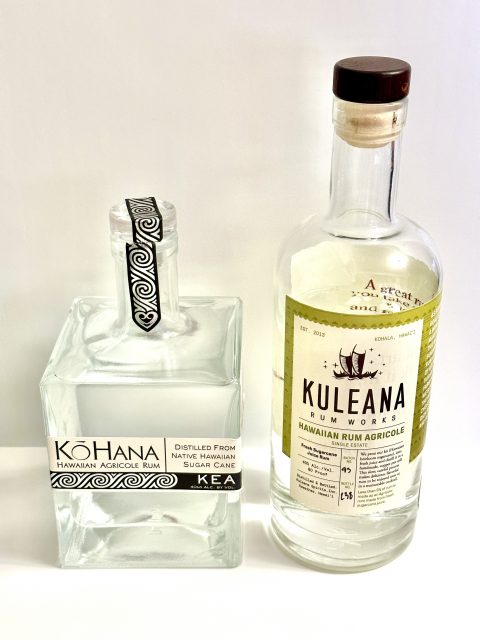 In any case, I picked up a bottle of Kō Hana Kea and decided to do a blind taste test against Kuleana’s Hawaiian Rum Agricole and a bottle of Rhum JM from Martinique. It was quite easy to taste the grassier flavors of the JM, which I do enjoy in cocktails. But to me the two Hawaiian rums had a deeper set of flavors and both had a richer mouthfeel and had a nice mix of sweet and savory notes. In terms of the blind test I leaned a little bit in favoring the Kuleana – but it was quite a close contest. Both do very well in a glass by themselves or in a cocktail, and I previously covered how I think the Kuleana works great as an accept rum with others inside a Mai Tai.

The two rums from Hawai’i are really great and I think that it is wonderful to see a burgeoning rum industry coming back in the state. Kuleana’s expression doesn’t specify a specific cane varietal, whereas Kō Hana very much leans into labeling the various varietals with their bottlings. Two different approaches for the two producers, giving consumers a choice.