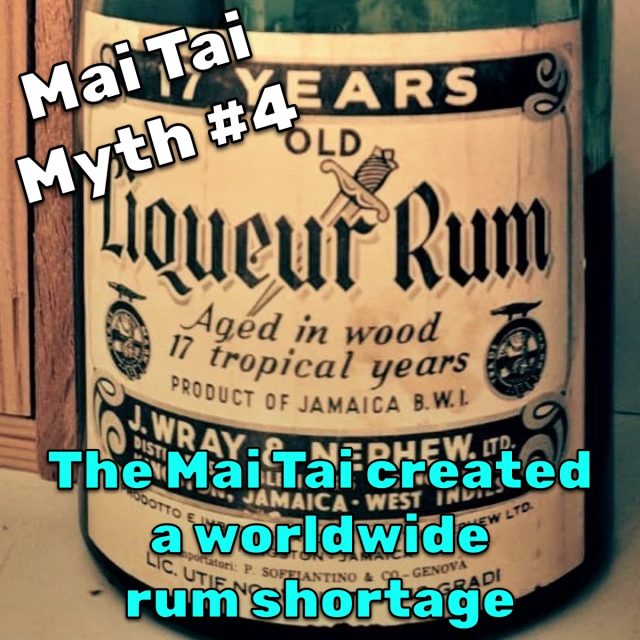 The original Mai Tai was made with a 17 year Jamaican rum from J. Wray & Nephew. This odd-aged release perhaps had something to do with barrels of rum sitting in warehouses during Prohibition and was available alongside Wray’s 15 and 20 year releases.

In the 1970 press release describing the origin of the Mai Tai, Trader Vic Bergeron states “The success of the Mai Tai and its acceptance soon caused the 17-year-old rum to become unavailable, so it was substituted with the same fine rum with 15 years aging.” This is where the myth originates, with people doing a shorthand to say that “rum” had a shortage due to the Mai Tai.

Firstly, Vic didn’t say that all rum ran short due to the Mai Tai, he said that one specific type of rum did. And even that is perhaps a tall-tale since Wray & Nephew certainly could have kept bottling a 17 year rum if they wanted to. There might have been a temporary gap in availability but if they could produce 15 year old rums for decades surely they could have figured out a way to keep some barrels in the warehouse for a couple additional years. But people like “round numbers” so that’s why you typically see 10, 12, 15, and 20 year old rums, but not 11, 13, and 17.

It is also unclear how many bottles Wray made of the 17 year. Perhaps Vic pulled a limited release rum?

There was not a “worldwide rum shortage” in the 1950s. It was a shortage of one specific rum that probably would have been discontinued whether or not it was used at Trader Vic’s service bar in 1944.

Want to learn more? Check our website for additional historical details. Or join us in Emeryville at Trader Vic’s Mai Tai Day event on August 28 for a special seminar on the Hawaiian Mai Tai.