Nonetheless, some people think that a “1944 Mai Tai” must only include Jamaican rum. 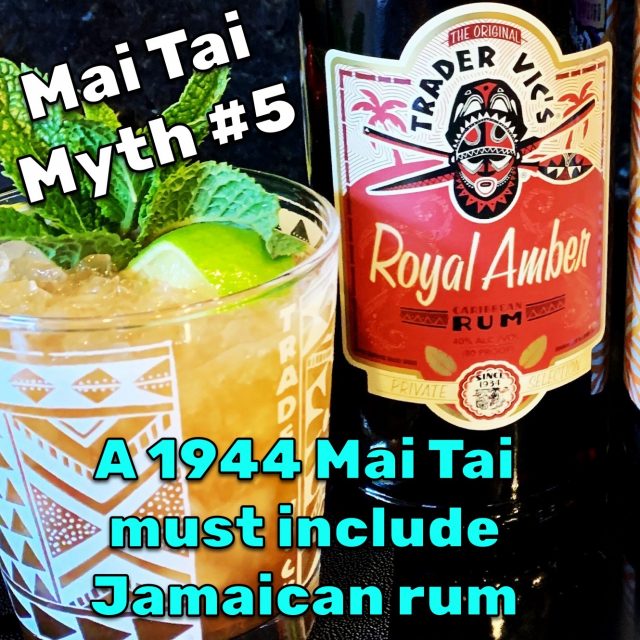 The logic behind this seems a little twisted. The original Mai Tai had Jamaican rum, so it must only ever be made with Jamaican rum. As if today’s Myers’s or Coruba unaged blended rums with caramel color would be comparable to the original full pot-still rum aged for 17 years.

Additional perspectives indicate that the term “1944 Mai Tai” means the original recipe (thus, Jamaican rum). My perspective is that the term “1944 Mai Tai” is most typically meant to refer to a recipe featuring lime, curaçao, orgeat, sugar, and rum – in other words, NOT an Island Mai Tai. Some folks have said that this should be called a “Trader Vic’s Mai Tai” to mean this recipe using any kind of rum, and to those folks I remind them that Trader Vic’s themselves have recently had a 1944 Mai Tai on their menu using non-Jamaican rums.

Want to learn more? Check our website for additional historical notes and essays. Or join us in Emeryville at Trader Vic’s Mai Tai Day event on August 28 for a special seminar on the Hawaiian Mai Tai.