Our family had a lot of great memories at Bug’s Land at Disney California Adventure, and a few even before that when it was the Bountiful Valley Farm, so I was bit sad when it was razed to make way for Avenger Campus that opened last year. And as a California native I regret that DCA’s initial “California” theme continues to be watered down. But, with adult children who love Marvel movies, it wasn’t like we were spending a lot of time in Bug’s Land anymore.

We gave Avenger’s Campus a try this trip. I enjoyed the Spider-Man attraction far more than I expected; it was lots of fun. And we gave the food eatery a chance this time too. Pym’s Test Kitchen is a counter-service restaurant with the gimmick that the food has been altered by Ant-Man shrinking/growing tech. Hence the gigantic pretzel or their chicken sandwich that has a tiny bun but an over-sized chicken patty. I even did a kids meal with make your own PB&J. Pretty good, and both walk-up and mobile order worked great for us on this trip.

Pym’s Tasting Lab is a bar that is adjacent to the Test Kitchen. This is where they offer beer, wine, beer cocktails, and cocktails. I decided to go with the Honey Buzz, which contains Gin, Lemon, and Honey, along with a “honey straw” that is basically a stick of honey. Otherwise known as a Bee’s Knees, this was a very sweet and easy to drink cocktail. I liked it a lot and ordered it again on our second visit. 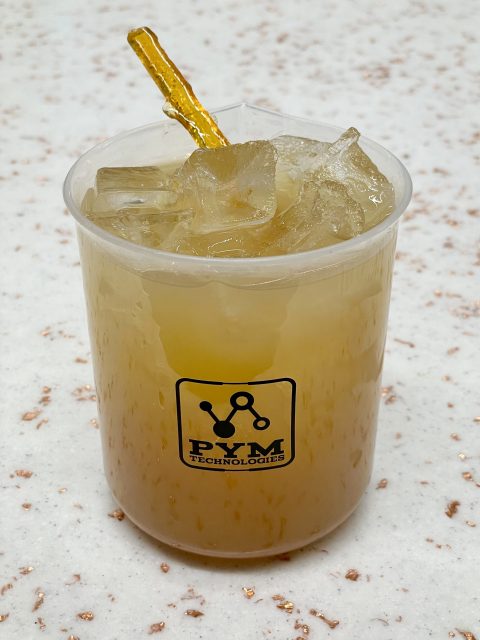 We also tried The Regulator, which is a beer cocktail with Patrón Silver Tequila and Golden Road Mango Cart Wheat Ale, with Mango and Habanero Syrups, and Mango Flavor-filled Boba. The Habanero was tempered enough for me to drink it, but still was too spicy for me.