I posted this to my Instagram stories and it seems to have drawn some interest.

When I posted about Worthy Park 109 a couple days ago, I mentioned that this new black rum from Jamaica tasted more like a Demerara rum from Guyana than the funky rums that Worthy Park is most famous for. Those Worthy Park rums are most notably expressed with Rum-Bar Overproof, but also many of the Hamilton rums that use Worthy Park distillate as their base. And then some people said that 109 didn’t taste anything like a Demerara and I was only looking at the color. Well, I’ll never turn down a challenge.

Hence the blind taste test with some Jamaican, Demerara, and blended rums. I compared the WP109 to Hamilton 86 from Guyana, Blackwell Black Gold from Jamaica, and the new Hamilton Zombie Blend that is a blend of rums from Jamaica and Guyana. 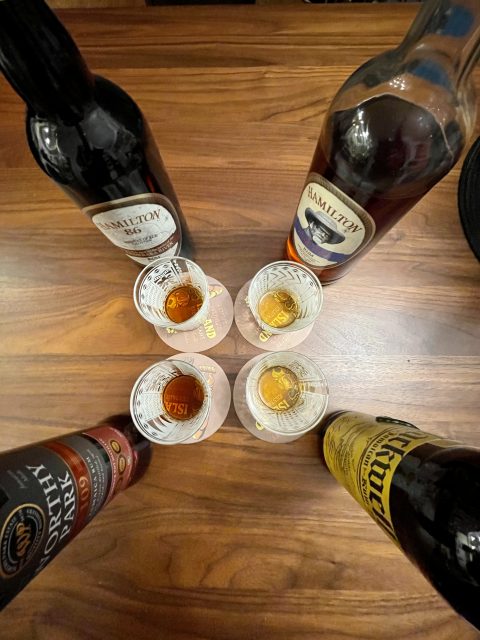 To me, the 109 tasted most similar to Hamilton 86. I know that caramel coloring is present in both and in theory does not impart taste, but to me these were very close. The 109 being 100% pot still and higher ABV did have a better mouthfeel and a richer taste.

The Blackwell was a poor choice for this comparison, since it was so clearly not really in the same league as the others. Beside the lower ABV (40%) there definitely was a sugary taste that made it stand out. The color isn’t that black either. I should have maybe tried Coruba instead. I find the Hamilton Pot Still Black to be quite funky (using Worthy Park distillate) so that wouldn’t really have been a good comparison either. In other words, Worthy Park 109 isn’t just a higher proof “black Jamaican” but something a bit different.

As for the true Demerara/Jamaican hybrid, I found the funky notes in the Hamilton Zombie Blend to be quite forward. While delicious and wonderful (and easily sippable at 59% ABV) it too didn’t really taste like the Worthy Park 109.