I’ve been digging Spike’s Breezeway Cocktail Hour from Spike Marble of the Hula Girls on YouTube for the past year, so I was more than happy to join Spike’s Patreon. The Breezeway pin was a nice bonus. Check it out each Friday.

Spike’s guest last week was Ed Hamilton of Hamilton Rum and Ministry of Rum fame. The episode was quite entertaining as the imposing Ed Hamilton made three different cocktails with Spike while talking about rum and the Hamilton Rum lineup. Having met Ed a couple times in person I’m sympathetic with Spike’s plight in that situation, even though Ed is quite friendly. After a rum demo in Oakland a couple years ago I came home and immediately ordered over $100 worth of Hamilton spirits, so the man really knows his rum.

The third cocktail that Ed made was the Orange Blossom. This was a little different, so I decided to make it according to the specs that are quite a bit less exact that are typical for tropical cocktail or craft cocktail recipes. 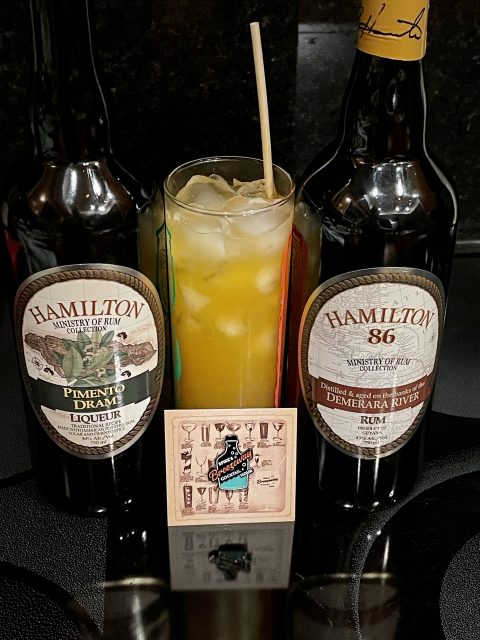 Did I mention how much I think Ed Hamilton knows rum? I will emphasize the point again. But, I have to say, this cocktail was actually less than the sum of its parts and I bet you’ve never had anything quite like this. They can’t all be winners. But hey, your milage might vary.