Following up from yesterday’s post about the Trader Vic’s Mai Tai at Gar Woods, I also wanted to try their “1944 Old Way” Mai Tai. Regular readers may recall that the term “Old Way Mai Tai” has different meanings, depending on who you ask and when you asked. In this case, it is a scratch Mai Tai (made with the Trader Vic’s Royal Amber rum) and topped with a float of Trader Vic’s 80 proof Dark Rum.

That particular Dark Rum isn’t my favorite but I scanned the spirits at the bar and spotted Pusser’s Rum. So, I asked for the 1944 made with Pusser’s instead. Well, it turns out there’s a no substitution policy for the Trader Vic’s Mai Tais (perhaps related to their licensing agreement) so the standard issue it was. 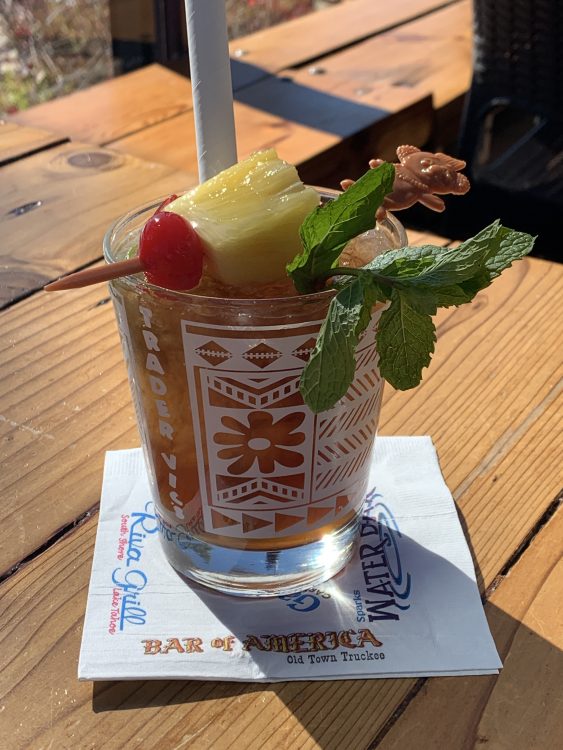 The second drama was that I didn’t use the gigantically wide straw that was provided (large enough to suck up small ice cubes) so I was sipping directly on the glass. Which meant that my first taste was nothing but the Dark Rum float. But, after a little stir with said straw, I am pleased to report that this was a really good 1944 Mai Tai.

Gar Woods has seating down on the pier and directly on the lake, so if you visiting in good weather and don’t mind a little sun, this could be a unique opportunity.

Worth noting that sister location Riva Grill in South Lake Tahoe also has a Trader Vic’s license, so give these restaurants a try the next time you’re in the area.