This term has been the matter of some debate amongst tiki nerds. It has been used most recently to refer to a Mai Tai made with a 151 float, a practice developed at the now-shuttered Trader Vic’s location in San Francisco. The story goes that a long-time customer liked his Mai Tais this way and the name was adapted based on the patron’s age.

But as recently as the 1990s, the Old Way Mai Tai was how Trader Vic’s referred to the cocktail made with the original ingredients and not using the Mai Tai mix that was used in place of the orgeat and curaçao. You can see this on some press materials distributed through the late 1990s, and Trader Vic’s grandson Peter Seely used that term in an interview in 1998. Today, the “1944 Mai Tai” is the most commonly used term to designate a Mai Tai made according to the original formula and with scratch ingredients.

The Old Way Mai Tai recipe shown here is also notable in its use of the St. James Rhum from Martinique. This agricole-style rhum made from sugar cane juice differs from the Jamaican rum that is made from molasses and was used in the original Mai Tai in 1944. During yesterday’s Zoom webinar organized by Trader Vic’s, cocktail historian Jeff “Beachbum” Berry theorized that the use of St. James dated back to the 1960s at Trader Vic’s locations. Eve Bergeron of Trader Vic’s noted that the Trader Vic’s Mai Tai Rum sold in the late 1960s-1980s contained 70% Jamaican Rum, 20% from Martinique, and 10% Virgin Islands. 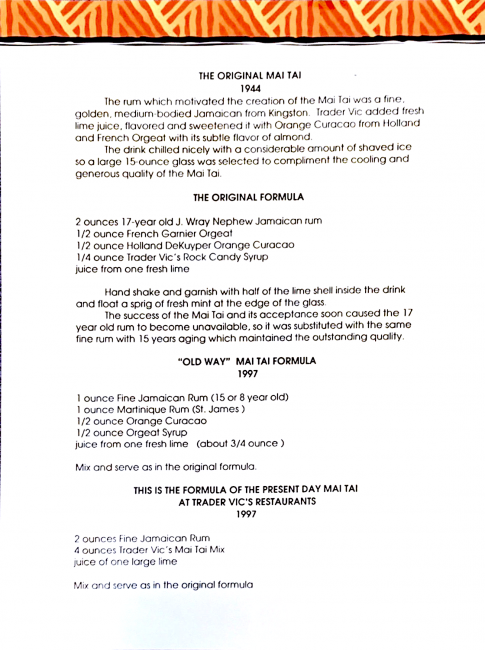