Had little bit of time on Monday night so I hopped over to check out The Luau, a newish tiki/surf bar in San Diego’s College East neighborhood. I figured it might be kind of slow but it was anything but. A nice mixed crowd of young people and some older ones hanging out on the Monday after Christmas.

Inside, Luau has a lot of painted walls with paintings and carvings, with some cozy seating up near the entrance. The bar is fronted with thatch, and there’s a very well appointed tropical patio out back. Music was a mix of styles, mostly 60s including Beach Boys, Monkees, solo George Harrison, reggae, and The Police. There are several framed prints making reference to the original 1950s Luau in Beverly Hills.

Every customer gets a welcome shooter made with Rum, Curaçao, Orgeat, Pineapple, Lime, and Soda as well as a little bowl of pretzels and goldfish crackers. The menu leans on touristy favorites such as the Blue Hawaii and frozen cocktails and the cocktails are free-poured and built in the glass. There’s a basic Mai Tai, a “skinny” Mai Tai, and the Mana Mai Tai made with “premium rums” and small batch orgeat. But the scant amount of rum bottles on the shelf and Hana Bay rum in the well indicated to me that “premium rum” might have a different meaning here compared to one of San Diego’s myriad craft cocktail bars. 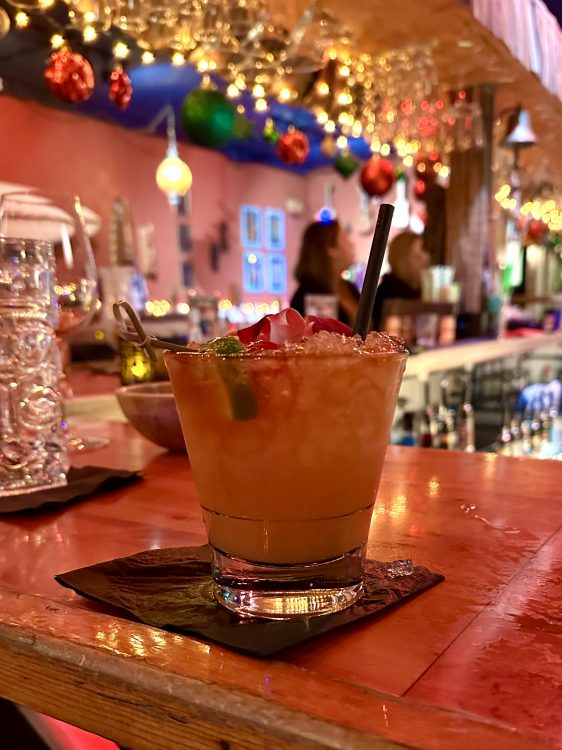 Nonetheless, I did try the Mana Mai Tai and found it to be just fine. Certainly far better than San Diego’s most famous Mai Tai!

The bartender (John, I think) was working alone and given how crowded it was did a good job holding down the fort as bartender, server, barback, and cashier. Definitely a friendly demeanor and told me about the live music they have on the weekends and how they also do karaoke here.

I think if you look at the Luau with a “glass half full” approach you’ll be on the right side. This isn’t a craft bar, but if you come in with the right attitude you should have a lot of fun. There was a party of seven that came into the bar and when their Luau shooters arrived they toasted to Whale’s Vagina (a reference from San Diego’s most famous celebrity news anchor, Ron Burgundy).

It would be great if Luau ownership could continue to invest in the interior decor and maybe after a few years it would really have that true tiki bar feel. As is, it ain’t bad and seems like a great neighborhood bar.