When Trader Vic Bergeron included the Mai Tai on his cocktail menu for the Royal Hawaiian Hotel and Moana Hotel in 1953, he never knew the cocktail would become one of the most famous in the world. The cocktail’s exotic name surely helped get the drink ordered, but the taste is what made the tourists rave.

This style of Mai Tai was similar to the original 1944 recipe, but was adjusted to omit the long-aged rums that had been the featured spirit in the cocktail up to that point. The use of light rum in combination with a flavorful dark rum was common across all published recipes of this era, including in the recipe that Bergeron provided to a guest in a letter in 1956. This affords a lighter style to the cocktail, likely considered more refreshing and approachable for the average hotel guest.

The dark Jamaican rum of this era was not as ester-forward as what you might find today, and funky rums wouldn’t have been a good choice for tourists. So, think of something like Coruba or Myers’s rather than Smith & Cross. The commonly seen Demerara rums you find today would be a fine substitution. Rum floats were not common during this time-period.

Though the recipes of this era vary, there are some common elements. Besides the use of both light and dark rum, the sweeteners were included in equal parts. Before pineapple and orange juice were added to the Hawaiian Mai Tai in the 1960s, we did see that citrus juice was used in healthy amounts. Lime was common, sometimes used in combination with lemon juice. 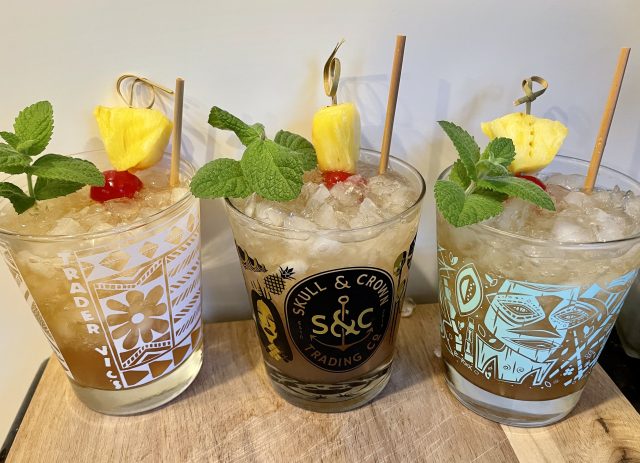 Looking at the recipes and how they varied, we’ve come up with a generic version that is both representative and also easy to prepare.

Shake with crushed ice and pour into a double-rocks glass, topping with more crushed ice. Garnish with mint or orchid, and either a pineapple spear or a speared pineapple chunk with a cherry.

The Halekulani Hotel still makes a Mai Tai that’s similar to this recipe, though they do add  a ½ float of Lemon Hart 151.