This restaurant and craft cocktail bar was recommended from a friend, and we decided to pop over for dinner last weekend at Arizona Tiki Oasis. Located past Tempe’s vibrant downtown, The Golden Pineapple would be easy to miss on a suburban boulevard, but definitely has the goods on the inside. We really enjoyed the food, including Navajo Fried Bread. My delicious Aloha Burger was made with a brisket patty and topped with coleslaw and teriyaki aioli.

There’s a large menu of craft cocktail options here, including many with rums you don’t normally see. Mrs. Mai Tai ordered the Surfer on Acid that has Mexican and Barbados Rums, Amaro Montenegro, Kalani Coconut Liqueur, Pineapple, Lime, and Angostura Bitters. A great combination of flavors and it is topped with a fun Jägermeister Jello mold. Very memorable.

Seeing that the venue has an extensive rum selection, I took a chance and asked the waitress to ask the bartender if they could make a 1944 Mai Tai. When she asked what was in it, I said to just ask the bartender if and they know then that’s what I’d like and if they didn’t then that was fine and I offered an on-menu substitute.

I’m sure that Mrs. Mai Tai is sick of these menu subs, but this was one those occasions where it truly was worth it, because the off-menu Mai Tai was fantastic! The bartender chose a bold Jamaican rum for the cocktail, which I found out later when the bill game was the Holmes Cay Jamaica Wedderburn 2011 Single Cask. This cask-strength rum comes from the Clarendon Distillery and is aged in Jamaica for three years, and then an additional seven in the U.K. It is great stuff, and was an excellent choice by the bartender to use a bold, flavorful Jamaican rum. And not much of an upcharge for the premium rum either.

Thank you Golden Pineapple for an amazing Mai Tai. Definitely one of the Top 10 Mai Tais so far in 2022. 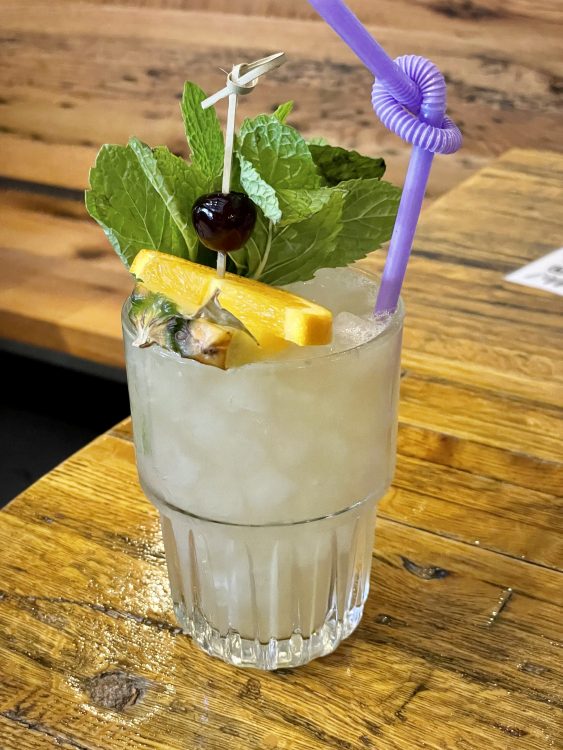