We ventured to Damon’s Steak House for a family meal. We’ve been going to Damon’s since the 1990s because we love the vintage Polynesian decor and old school service style. And we sort of have a dysfunctional relationship with their signature cocktail: Damon’s Famous Mai Tai. It isn’t really great, but we can’t stop coming to try it. Mrs. Mai Tai doesn’t mind because their other standard cocktail is the Chi Chi. 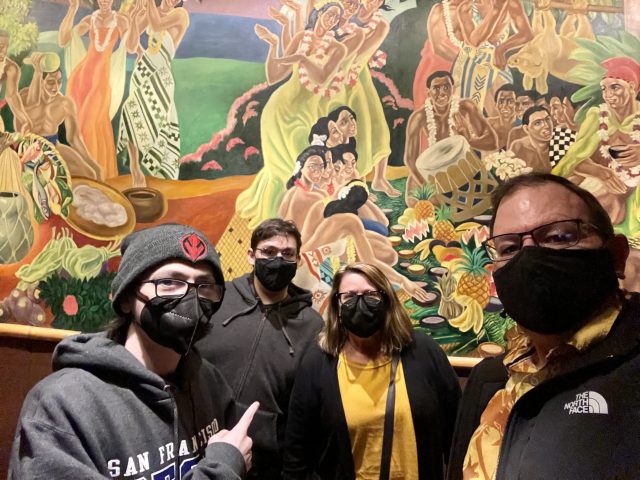 A recent menu change is that they are leaning in big time to provide variations of the Mai Tai and Chi Chi. This is probably a good trend, and some of them seemed like inspired options. Though, notably, all of these have ‘Orgeat “secret sauce”‘ which is an unusual label. Once makes you wonder if it is really orgeat or something different.

The Trader Vics’ 1944 Mai Tai wasn’t bad at all, aside from the limp mint. This at least resembled a Mai Tai and wasn’t overly sweet. The same can’t be said of the Royal Mai Tai, which we thought might be good given the more exotic rums from Martinique and Hawaii. We saw the grenadine on the ingredient list, thinking it would be a dash. Instead it seemed to be a heavy splash of grenadine. Definitely not good and way too sticky sweet. Splitting the difference was Damon’s original island-style Mai Tai.

Service was truly excellent, with drink refills and cocktail refreshers coming super quickly. There was a mix-up with our soup, which our waiter fixed right away. There didn’t seem to be much music playing and the bar was filled with revelers, though it was relaxed out on the upper seating area where we were. They give you a lot of food at Damon’s, including soup or salad (the Split Pea Soup was great), and the staff offered some Mac and Cheese for our son who didn’t want either soup or salad. Food was just okay overall.

Damon’s hasn’t changed much in the 25 years we’ve been going. Still very old school for the most part, with some recent attempts to elevate the cocktails. Definitely have to have the right attitude going in, but we enjoyed our experience once again.