People sometimes ask, “aren’t you tired of always getting the Mai Tai?” I answer by saying I love to get the Mai Tai. It is never a burden.

But, some days are harder than others.

Isla Nu-Bar debuted a couple years ago when the Jurassic Park section of Universal Studios Hollywood was rebranded as Jurassic World. As you can see from the menu, there are a variety of tropical drinks available, along with beer.

The Mai Tai is made with Rum, Dark Rum, Pineapple, Orange, and Lime Juice. Firstly, there is rum, but also “dark rum.” So what is this other kind of non-dark rum, exactly? Probably focusing on the wrong sort of details. 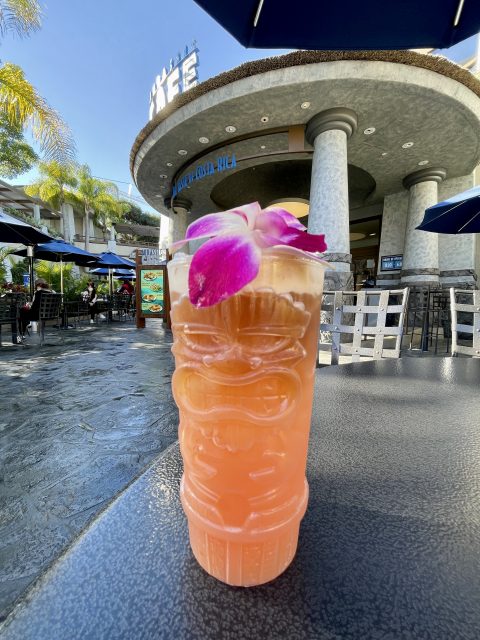 It is an easy to drink cocktail that is sweet and fruity with enough rum to pass muster for $15 including souvenir plastic glass and an orchid garnish. But, it isn’t really a Mai Tai. But you already knew that.

I probably should have tried the “Tiki Tai” which actually does contain orgeat. But with pineapple rum from Don Q and passionfruit puree I doubt it would be much different or better.

The cocktail was refreshing and we enjoyed lunch at Jurassic World and watched some cool raptor encounters.