There are few things that bug me more than when restaurants/bars call their Mai Tai “World Famous” (heck, even Trader Vic’s doesn’t do this). The hype is very rarely deserved. But for the past couple months I had seen people extolling the virtues of the Walnut Creek Yacht Club Mai Tai. So I had to give this a try and see if it was worth the hype.

Firstly, for those outside the Bay Area the idea of a “Yacht Club” in Walnut Creek is surely iconic. It’s an inland suburb at least 10 miles away from any seafaring body of water, but the restaurant specializes in seafood and has a nautical decor to match. Their back bar demonstrates they know a few things about spirits, including Havana Club from Cuba and a number of excellent rums. I ordered a Lobster Roll with garlic fries that was delicious and heavy on the lobster meat, while Mrs. Mai Tai had scallops with Brussels sprouts. Food was a bit pricey but tasted great.

The Mai Tai is provided kit-style, complete with a large bag of crushed ice. Also included are two spent and inverted lime shells, a little mint, a side of dark Coruba rum, a bottled Mai Tai and instructions. As served in the restaurant, the Mai Tai is served with crushed ice and the dark rum added into the lime shell. Ingredients are largely high quality, including Appleton Reserve Rum, Coruba Rum, Orgeat, Ferrand Dry Curacao, and lime juice that’s definitely fresh. Cruzan Spiced Rum is the only questionable ingredient, but thankfully this is not forward in the cocktail. The kit costs $30 and serves three Mai Tais or “2 big ones.” We found that to be an honest assessment of the volume provided, which means this is a extraordinary value. 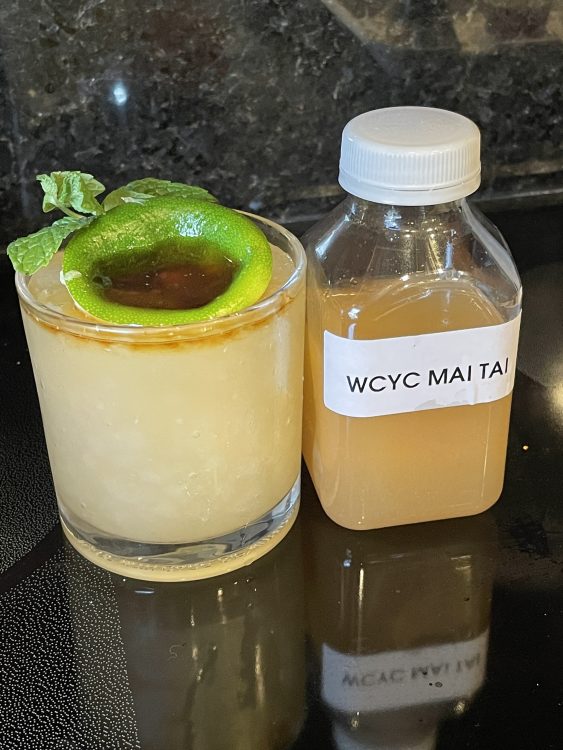 The Verdict:
Sometimes the product is worth the hype. I can honestly say this is pretty damn good Mai Tai, and is likely to make my year-end top 10.

The mix of flavors including a zesty lime really deliver, and the provided pebble ice is also high quality.I made a version with the dark rum pre-mixed, and then another one where the float was added in the traditional style into the cocktail rather than into the lime, and the versions with the float tasted the best. So the Walnut Creek Yacht Club team do know where they are doing.