The list includes commercial restaurants and bars, plus Mai Tais we had at home tiki bars and events. You can view the full list and additional details on our page:
Top 10 Mai Tais of 2022 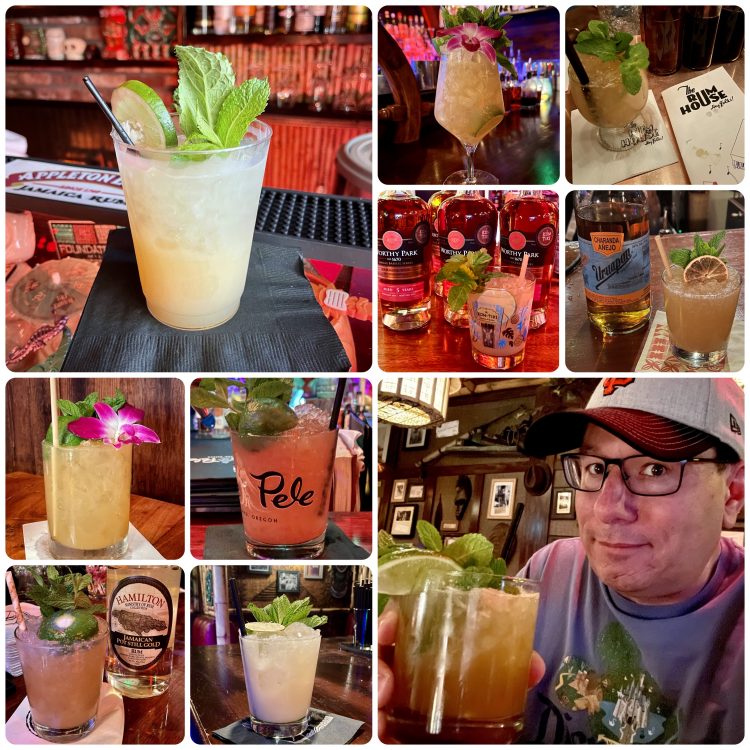 The original rum blend in the Dr. Funk Mai Tai featured two of our favorite rums, Appleton 12 and Smith & Cross.

We thank bartender Steven Liles for indulging us with the custom order and for making a great Mai Tai.

Who knew that a combination of inexpensive Jamaican rums like Coruba Dark and Wray & Nephew Overproof could be so flavorful and memorable?

I found myself at the bar at Trader Sam’s on a slow afternoon and Skipper Nate totally willing to work with me to find the very best Mai Tai that could be made on the premises.

It seems impossible to believe that a party Mai Tai served in a plastic cup could be the best this year but when the Correy and Mariella Bravo make a Mai Tai their way you know it’s going to be Maita’i roa ae.

We completed our NYC trip with a stay at the TWA Hotel ahead of our early morning departure from JFK. Morse has repurposed the 1962 TWA terminal and turned it into a hotel complete with a restaurant, a small food court, a couple lounges, pool, and tons of historical displays. Plus more midcentury eye candy than any airport hotel I know of. 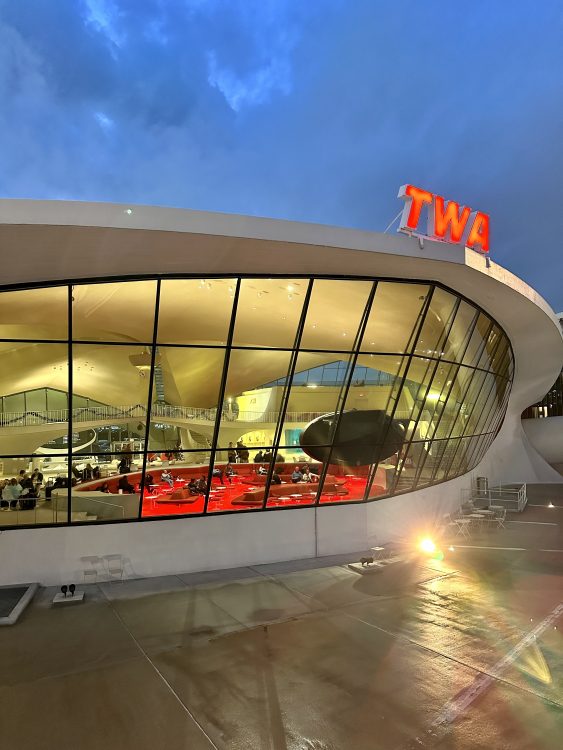 We arrived in mid-afternoon, plenty of time to wander around and look at the displays. There’s really a lot of cool stuff here, with historical background on the terminal and several set pieces that you can explore. We enjoyed the Blue Christmas display. Music inside was a mix of 60s favorites and vintage holiday songs.

The hotel buildings are brand new and well appointed. Plenty of vintage style touches and a very nice bed and bathroom. The desk behind the bed in our room was a cool touch. And you can’t beat these huge windows that overlook the hotel or the runways.

The pool was on the roof of our wing and the pool bar is enclosed for the winter with a Swiss Chalet theme. The bar serves food and airplane-related cocktails. I had the Paper Plane.

The hotel connects to Terminal 7 (Jet Blue) at JFK and is obviously handy for flights in or out. But I think locals would have a blast spending an afternoon here and doing dinner and drinks. Or just check out the hotel during a layover. Either way, every midcentury fan needs to visit the TWA Hotel. 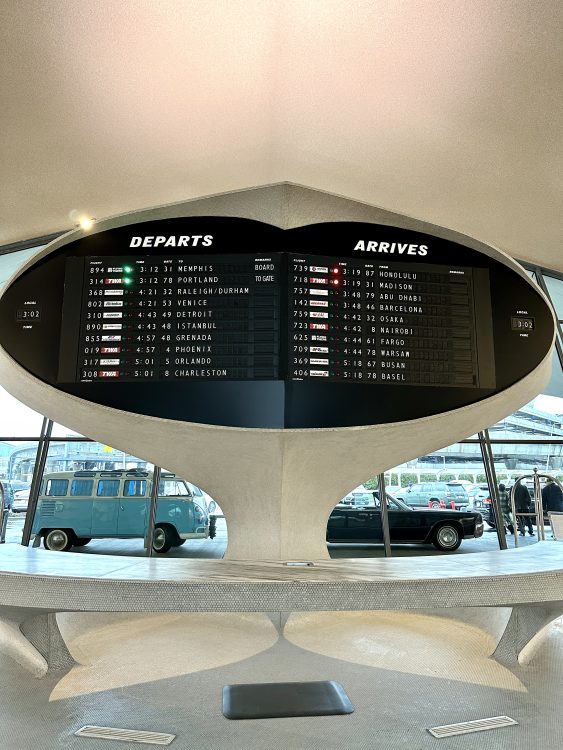 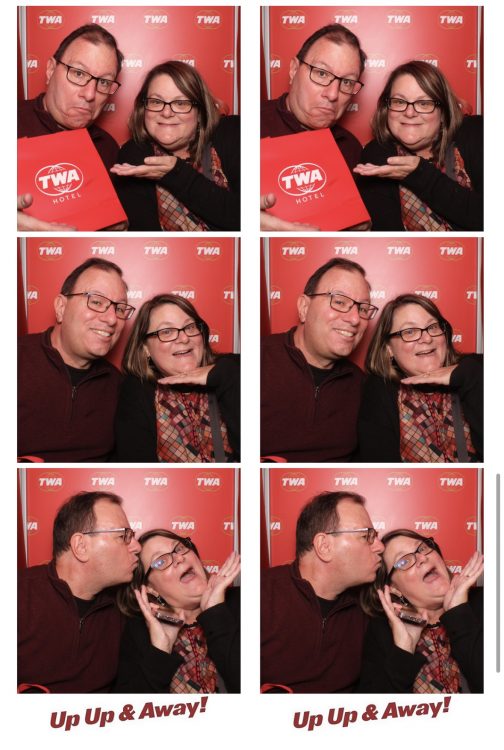 The Paris Café by Jean-Georges serves upscale breakfast, lunch and dinner. The hotel wasn’t too crowded on our visit so we rolled in and had a great dinner. I absolutely loved my Parmesan Crusted Chicken Breast.

We had an interesting experience with the cocktails. There’s a Black Mission Fig Colada on the menu, featuring rum, Velvet Falernum, fig, toasted coconut, and lemon, so this is right up Mrs. Mai Tai’s alley. But when she ordered it the server said she didn’t recommend it because customers don’t like it. We said we’d take the chance, but once it was served we found that the “colada” was served up and had a weak but unpleasant taste. It was really terrible. 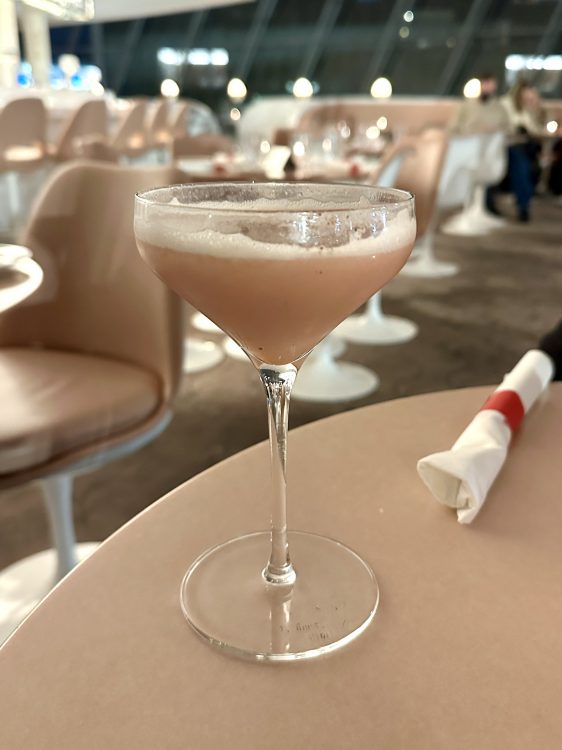 Our server replaced the drink and the Pomegranate Storm was much better. Lesson? Listen to your server! My Concord Whiskey Sour was pretty good, featuring grapes as a garnish.

The Paris Café is located on the second level up a flight of stairs and give a great view of the main terminal/lobby area as well as the surrounding grounds and hotel wing. 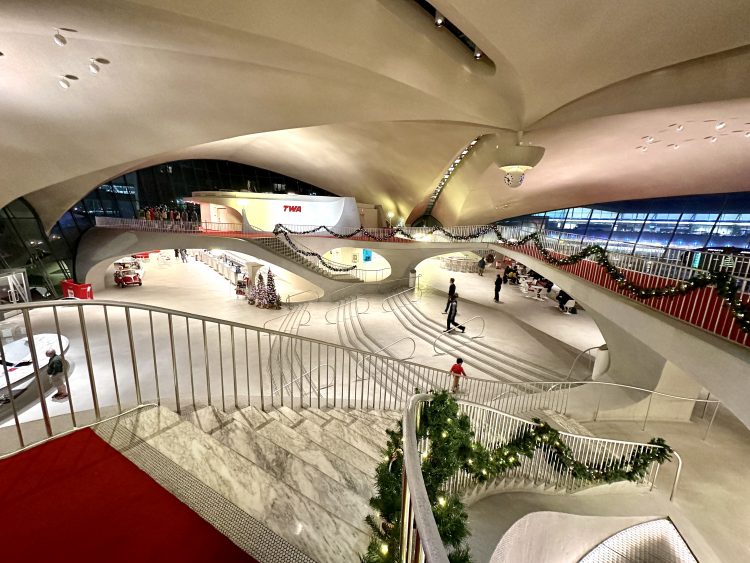 We went down to the Food Hall for desert. This is a sort of food court and features booths from some local businesses, plus seating. Just steps away from the Sunken Lounge seating area that’s also a cool place to hang out. A nice option if you’re looking for something quick.

A key feature of the TWA Hotel is a vintage 1958 Lockheed Constellation “Connie” airplane turned into a cocktail lounge. The Connie was an important airplane in the the transition to jet-powered airplanes, and was even used as Air Force One for President Eisenhower. It was the first pressurized-cabin civil airliner series to go into widespread use and the TWA terminal was built with this airplane in mind.

Sadly, by the time the TWA Terminal was completed in 1962, the airplane was nearly obsolete. This particular aircraft was repurposed as an Alaskan bush plane and later used by drug runners before being restored for the hotel. 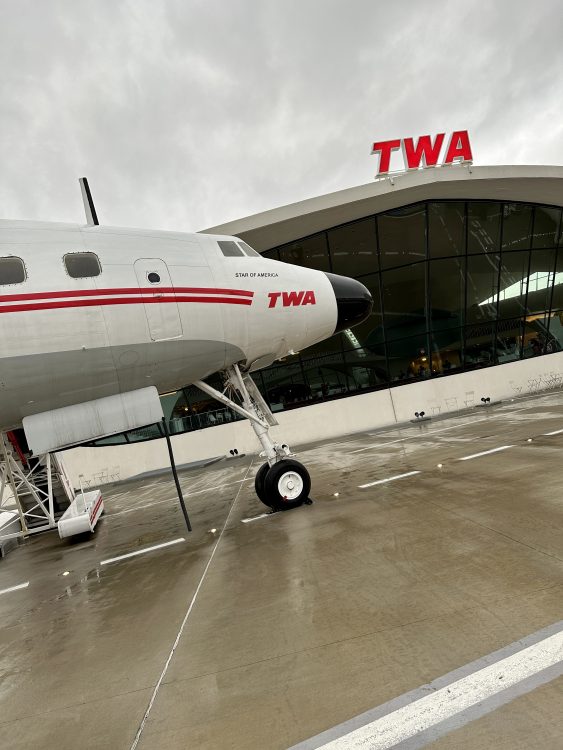 The entire aircraft is now a lounge and you can order airplane-related cocktails in the back. Aside from the Paper Plane, each cocktail is a renamed version of classic. I enjoyed the “Eero Dynamics” (Whiskey Sour) and Mrs. Mai Tai enjoyed the “Control Tower Sour” with Amaretto. I also tried the “Mile-High Margarita” but asked to sub rum for the Tequila. 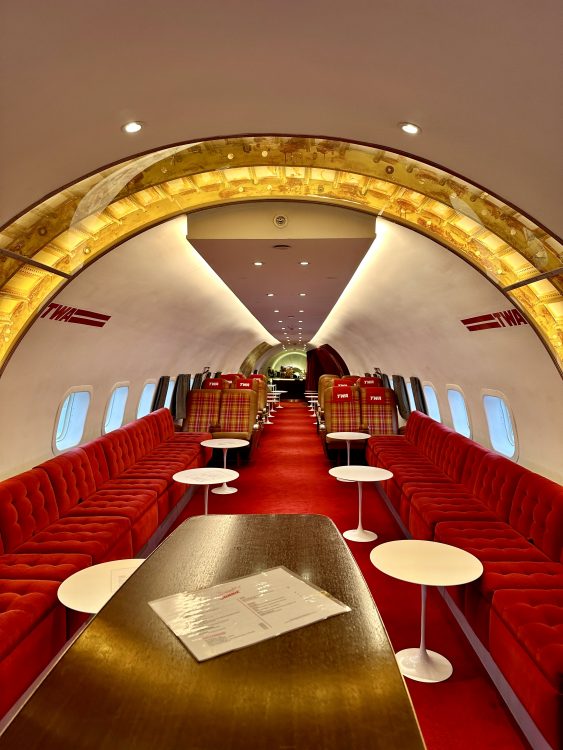 Because there are no overhead storage bins, there’s plenty of headroom and the music inside is all vintage era-appropriate. There are a few TWA-branded snack packs available for purchase as well. Connie is open from 4 pm to 10:30 pm every day.

I know that people can order drinks on real airplanes, but this lounge is still totally a hoot. After several days walking around Manhattan, relaxing with drinks was the perfect transition for the flight back home. 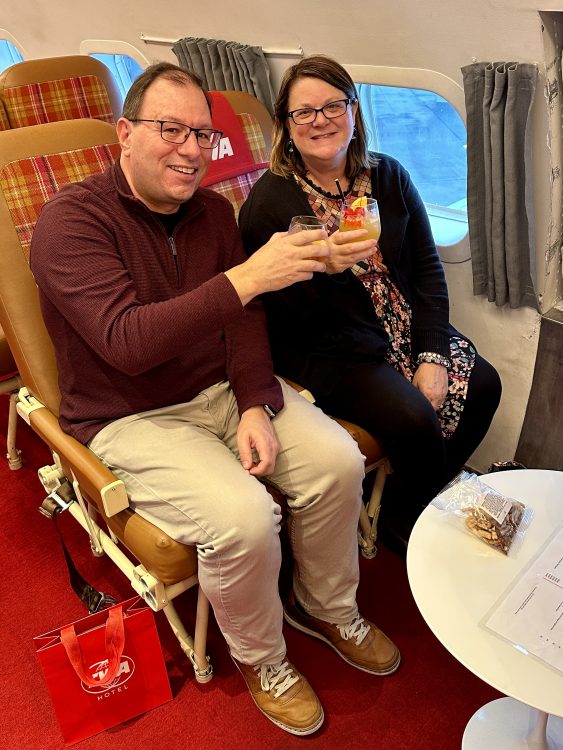 New York City has a notorious reputation for not being able to support true tiki bars, but there is hope that Brooklyn’s Sunken Harbor Club can combine most of the elements we seek at tiki bars while forging a distinct and slightly different path. 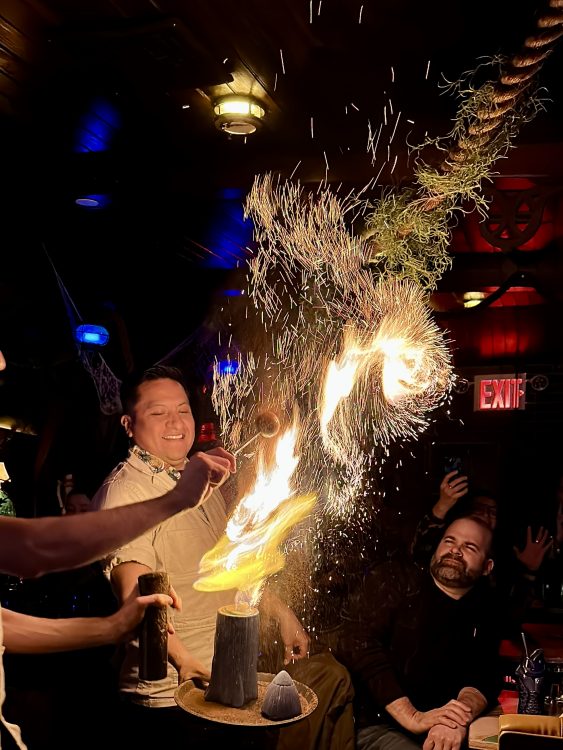 Located above restaurant Gage and Tollner, Sunken Harbor Club doesn’t have any totems but is otherwise everything you’d want in a tiki bar. It’s an intimate and immersive experience featuring nautical decor, exotica/surf/lounge music, and cocktails from the tiki tradition. Along with an innovative approach to the extensive cocktail list, small bites are also available. We loved the Miso Butterscotch Pudding with toasted coconut.

Aside from the fantastic Mai Tai we highlighted a few days ago, we were impressed by the cocktails. Thanks to Garret Richard and team, the cocktails use high quality ingredients and modern techniques to deliver superb cocktails. I really dug the Special Daiquiri No. 1 featuring Jamaican rum, passion fruit, honey, and falernum. Meanwhile Mrs. Mai Tai had the Yellow Tang with vodka, banana, pineapple, and passion fruit. This was from the “In the Shallows” section of the menu that features lighter cocktails, but was a little too light for what she wanted. She had better luck with the Ango Colada and the Bridge of Sighs, a complex blend of aperitivo, coffee, ginger, and rum. 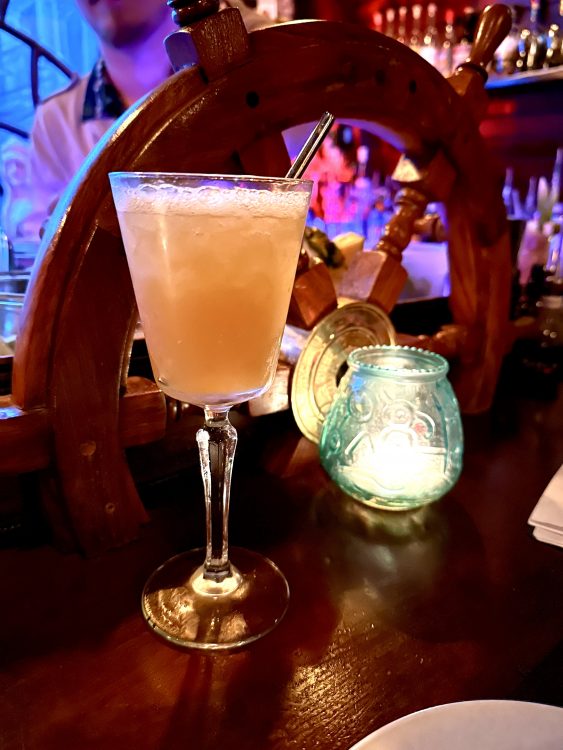 The experience at Sunken Harbor Club was exquisite. Our bartender Dan Olivo was super friendly and engaging and watching him prepare the cocktails was like watching a mad scientist working with precision to prepare the cocktail and the garnishes. Dan also led the fire displays when customers ordered flaming cocktails such as off-menu Jet Pilots. Those are always a big hit with audiences and all the staff including Clayton (on shift this evening) and Garret and Adam truly have hospitality in mind when promoting the venue.

If you like tiki bars you’ll probably be having too much fun to notice totems aren’t there. It was very easy for us to take the Subway from Midtown to the Jay St./Metrotech station right across the street, so any tourist in the city should prioritize a visit. 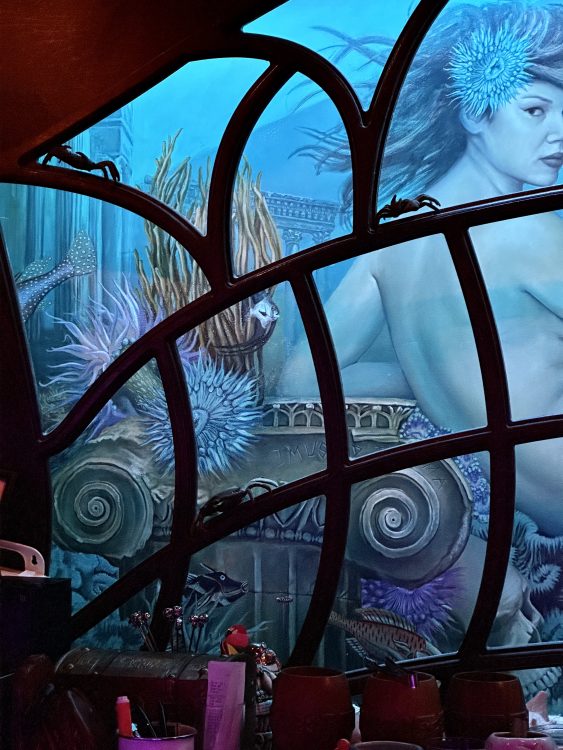 The Rum House a small bar located off the lobby of the Edison Hotel including a street entrance. We tried the other night but it was standing room only, but the next we came in just as another couple left so we swooped onto their seats.

Indeed there are a number of excellent rums here, including a Caroni for only $70 a pour. Plus an extensive cocktail menu. 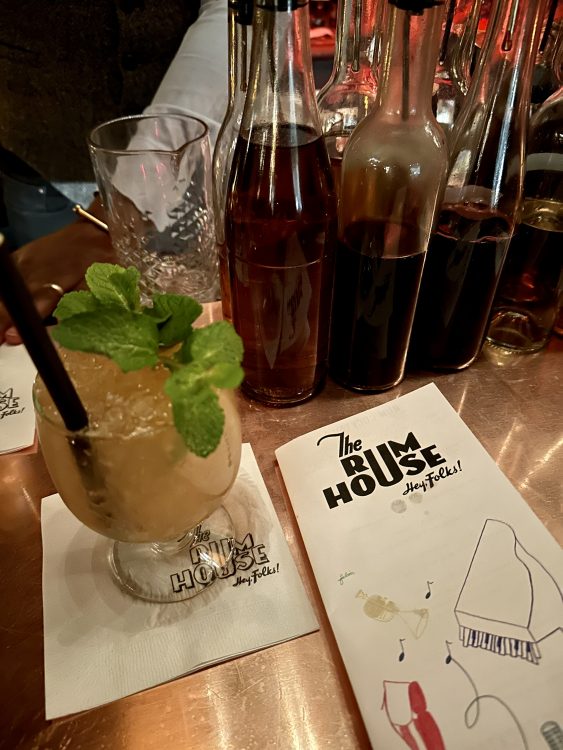 Trader Nic’s Mai Tai, named after the head bartender, features Hamilton Jamaican Pot Still Black and unaged Rhum JM, plus a tiny float of OFTD. Both rums play well together in the base. Simply fantastic!

Our bartender Troy held court, teaching some rum newbies about Overproof Jamaican rum and posing for photos with patrons. But he kept on top of our order and was totally friendly and welcoming. @1.800.troy

We really enjoyed the visit to Rum House, located on 47th right off Times Square. Check it out. 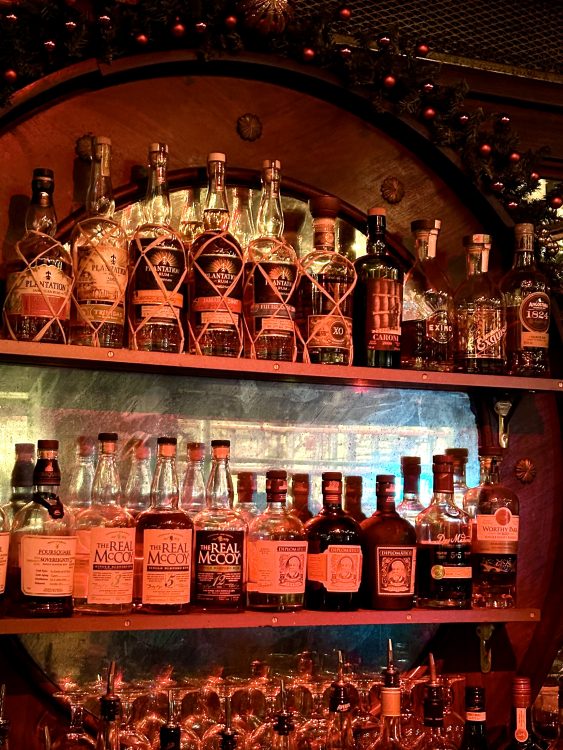 There are a couple unusual adjustments to the preparation of this cocktail. Firstly, a few drops of saline solution are added to bring out the flavors of the ingredients. Next, a lime wedge is placed in the glass and combined with the the shaken cocktail. In addition to a gigantic bouquet of mint, a lime peel is expressed and then wrapped around the straw. The fragrance of lime and mint really add a lot to the cocktail, not unlike the little squeeze of lime I’ve had with previous Mai Tais at Trader Vic’s. The lime in the glass adds a little bit more tartness as you finish the drink, however. 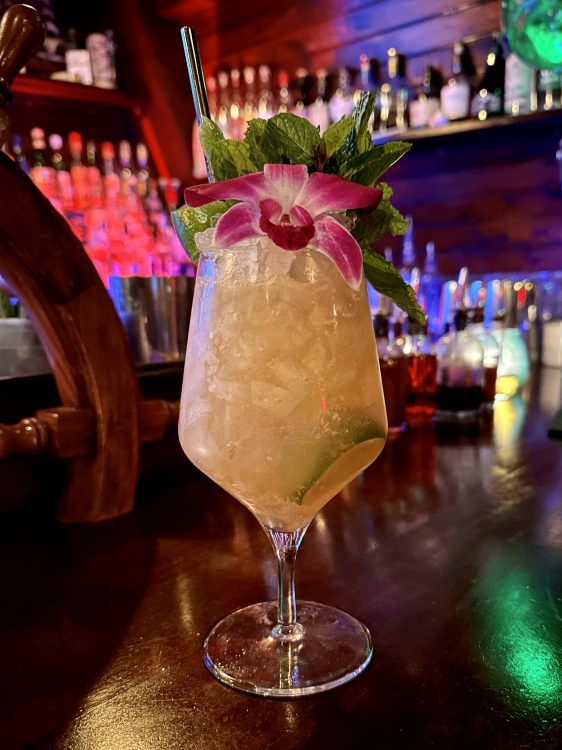 The blend of rums is quite delightful and the Mai Tai is fantastic. Thanks to Dan @wolfsbanecocktails for making such a fantastic cocktail.